These 'Game of Thrones' Facts Will Change Your Perspective | 22 Words 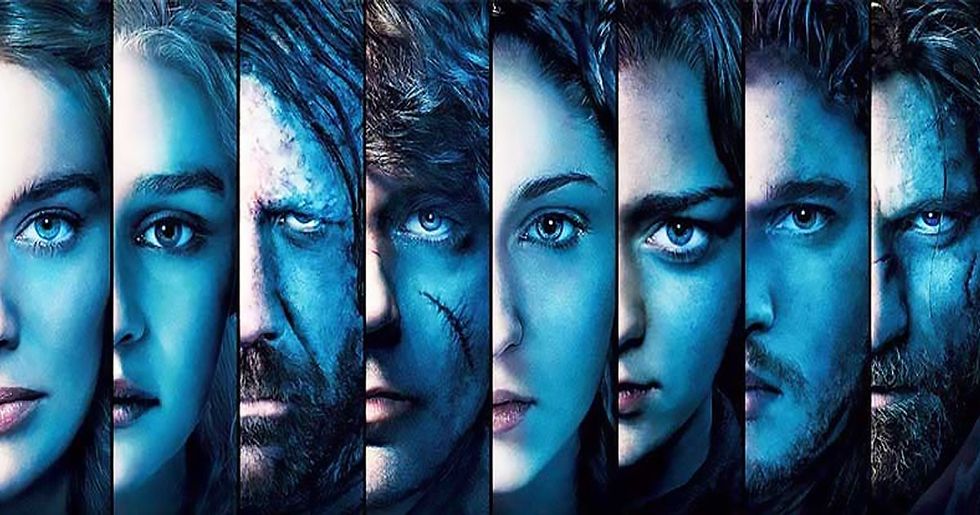 These 'Game of Thrones' Facts Will Change Your Perspective

It is safe to say this is a television show of epic proportions, one that will leave a hole in our hearts at least the size of the hole it will leave in HBO's Sunday night lineup. What better way to spend the last few episodes of the series than by immersing yourself in its world? We've compiled 76 insane facts about Game of Thrones so you don't even have to think about saying goodbye. At least not yet.

The first time they met

When Emilia Clarke first met her Jason Momoa, who would play her on-screen husband Khal Drogo, he screamed "WIFEY!", ran to her, and tackled her to the ground.

Charles Dance, who played Tywin Lannister, found his character’s behavior toward his son so egregious that he kept apologizing to Peter Dinklage (Tyrion) between takes.

The ultimate reason George R.R. Martin allowed David Benioff and D.B. Weiss to make the show is that they could answer the question, “Who’s Jon Snow’s mother?"

No single character has appeared in every single episode of the show.

Peter Dinklage appears in more episodes than any other character in the show. Which leads us to...

Mathematicians concluded that Tyrion is the main protagonist of the series because he interacts with the most characters.

But Peter Dinklage almost turned down the role in the show because he was wary of doing fantasy.

Sophie Turner (Sansa) and her mom adopted the puppy who played her direwolf in the first season of the show, and the dog lived a long and happy life at home with the Turner family.

Jack Gleeson, who played Joffrey, modeled his performance after that of Joaquin Pheonix in Gladiator.

Joffrey, the character and the actor who plays him, bears a striking resemblance to the real-life ruthless Roman emperor, Caligula. We're just getting started, folks.

The show aged up the Stark kids a few years. In the books, Robb and Jon are only supposed to be about 14 or 15 years old, which would have made everyone else really young.

Kit Harington (Jon Snow) and Rose Leslie (Ygritte) are married in real life. They fell in love while filming the show.

Iwan Rheon, who played Ramsay Bolton, originally auditioned for the part of Jon Snow. In fact, he was the runner up for the role.

The opaque contacts Maisie Williams wears when she plays blind Arya Stark were painful and awkward.

Lena Headey (Cersei) and Jerome Flynn (Bronn), dated in real life. Unfortunately, it didn’t end well. Both have clauses in their contracts ensuring that they’re never in scenes together and don’t even see each other on set. Think that's juicy? Keep reading.

Lena Headey gets hate in real life for her portrayal of Cersei. Some people can’t seem to separate the character from the real person.

The show used a body double for Lenda Headey during that scene where she walks naked through the streets.

David Benioff originally wanted the House Lannister song, “The Rains of Castamere," to be the show’s theme song. D.B. Weiss convinced him not to do it.

Game of Thrones is one of the most expensive TV shows to make. Its sixth season alone had a budget of over $100 million.

Carice van Houten, who played Melisandre, was asked to audition for the role of Cersei, but she couldn’t because she had a conflict at the time. Oh, there's still so much more yet to come...

George R.R. Martin likes a couple of the show’s versions of certain characters better than the versions he wrote for the books. Natalia Tena as Osha and Sibel Kekilli as Shae are on that list.

No ticket for Jon Snow

Kit Harington once got out of a speeding ticket because the cop wanted to know if Jon Snow lived. Harington told him, and the officer responded, “On your way, Lord Commander," and let him go.

Thomas Brodie-Sangster was 22 when he was cast as Jojen Reed, who is supposed to be 13 years old.

Yara Greyjoy is named Asha in the books. The name was changed for the show so she didn’t get confused with Osha.

Dean-Charles Chapman plays Tommen's cousin Martyn Lannister in the early seasons of the show, but then in season four, he took over the role of Tommen. That's kind of crazy, but just wait...

Lord of the Rings

Perhaps unsurprisingly, Lord of the Rings was a huge influence on George R.R. Martin while he was writing the books.

In fact, Gandalf's sword, Glamdring, from the "Lord of the Rings" is forged inside the Iron Throne in the show, presumably as a nod to J.R.R. Tolkien's series.

There are only a handful of episodes in the entire series in which no one dies on screen during the episode.

Ser Pounce, Tommen’s cat, disappeared from the show after Tommen’s death. When asked about it, Benioff claimed that Cersei killed Ser Pounce, and it was too gruesome to air.

Daenerys has violet eyes in the books, but when Emilia Clarke attempted to wear colored contacts, they affected her performance, so they were abandoned. We're not even halfway there...

There is an unreleased version of the pilot episode out there that’s very different from the pilot we ended up seeing. Even Daenerys’ character was played by a different actress: Tamzin Merchant (pictured above).

In the unaired pilot, Jennifer Ehle played Catelyn Stark. She was replaced when the pilot was reshot.

Alfie Allen, who plays Theon Greyjoy, is the brother of singer Lily Allen.

Natalie Dormer, who plays Margaery Tyrell, was such a fan of the show that she tried to avoid spoilers even when she was on it. She did so by only reading the scenes that had her character in them.

In Westeros, bastards are given last names based on where they were born. Jon Snow was given the surname “Snow" because he was born in the North.

Gregor Clegane, or The Mountain, has been played by three different actors over the course of the show.

Peter Dinklage and Lena Heady may have their on-screen issues, but they are best friends in real life.

Emilia Clarke was so sticky while shooting the scene where she eats the horse heart that she got stuck to a toilet.

In 2014, Khaleesi was the 755th most popular baby name for girls in the United States. This is heating up, folks...

Kit Harington showed up to his audition for the show with a black eye. He’d gotten into a fight at McDonald’s the night before.

We meet Tywin Lannister while he’s skinning a deer. It was a real deer, and he was really skinning it on camera. He'd gotten a lesson on how to do it from a butcher the day before.

At least 10 actors who have appeared in Game of Thrones also appeared in the Harry Potter series.

Peter Dinklage was the first and only choice for the role of Tyrion.

The only other role George R.R. Martin had in mind was Ned Stark. He wanted Sean Bean for that job. The next one truly blew me away...

The guy that got an arrow through the head in the first episode of the final season? Yeah, that was It’s Always Sunny in Philadelphia’s own Rob McElhenney.

Another one of the show's comedy buds Martin Starr (Freaks and Geeks, Silicon Valley) also had a hidden cameo in that episode. Also, this is now my favorite picture of Martin Starr.

Ed Sheeran also had a cameo in Game of Thrones. He even sings!

Mets pitcher Noah Syndergaard was briefly in a season seven episode. He played a soldier in the Lannister army who threw a spear.

The furs worn by the men in the Night’s Watch are actually rugs from IKEA. Who knew?

Hold the door. The actor who played Hodor is a house music DJ. This is real.

Ian Whyte has played four characters on the show: a white walker, the Mountain, an unnamed giant, and the giant Wun Wun.

During season seven, the paparazzi was so bad that the cast and crew actually spent hours filming fake scenes they’d never use in the show.

GoT in the family

Conleth Hill (Varys) has a brother who works on the show as a sound mixer.

There was actually a class at Harvard all about the show called “The Real Game of Thrones: From Modern Myths to Medieval Models." The next one is truly spooky...

Both Lena Headey and Emilia Clarke have played Sarah Connor in the Terminator series.

Richard Madden, who played Robb Stark, decided to keep himself in the dark about his character’s fate while he was acting on the show. But people on the internet spoiled it for him.

Kit Harington had a safeword during the filming of that scene in the Battle of the Bastards when he’s being trampled by piles of people.

George R. R. Martin had a cameo in the original version of the pilot, but the scene was scrapped.

Sean Bean played soccer on set with the model of Ned Stark’s decapitated head. We're not done yet!

Dothraki is a real language that you can learn, thanks to linguist David J. Peterson.

Part of the pilot episode was shot in a castle that was used in Monty Python and the Holy Grail.

Several characters that have died on the show are still alive in the books, including Shireen and Stannis Baratheon, Mance Rayder, and Pyp and Grenn from the Night’s Watch.

A study concluded that characters on the show have a 14 percent chance of dying within one hour of being introduced.

Kit Harington said he went through a dark period between seasons five and six when Jon Snow died and then came back. I can only imagine...

Kit Harington had to lie to his castmates about Jon Snow’s fate. Some people didn’t buy it, but Sophie Turner did. She wrote him a long letter about how nice it was to work with him, not realizing he’d actually be back the next season.

Gillian Anderson could have had a role on the show, but she turned it down. That would have been something else. But I'm just glad she got to do The Fall.

The show has an official rap companion album released by HBO in 2014. It’s called Catch the Throne.

After the pilot was picked up, the creators called Peter Dinklage and pranked him by telling him the show was canceled. It was six hours before he learned the truth. The last few are big ones...

Devid Benioff’s wife, actress Amanda Peet, is a huge fan of the show. She (jokingly) threatened to divorce him if he killed off Jon Snow.

The dragon egg props from the show were given to George R.R. Martin as a wedding gift.

Showrunners David Benioff and D.B. Weiss know generally how the books will end. They met with George R.R. Martin to talk it over.

The books will still end a bit differently than the show does, so for fans of both: never fear.

George R.R. Martin does wish he’d finished the books before the show got ahead of him. This is a somewhat new and interesting situation.

George R.R. Martin has said that some fans have already accurately guessed how Game of Thrones will end. Have you? Share this with the biggest GoT fan you know.