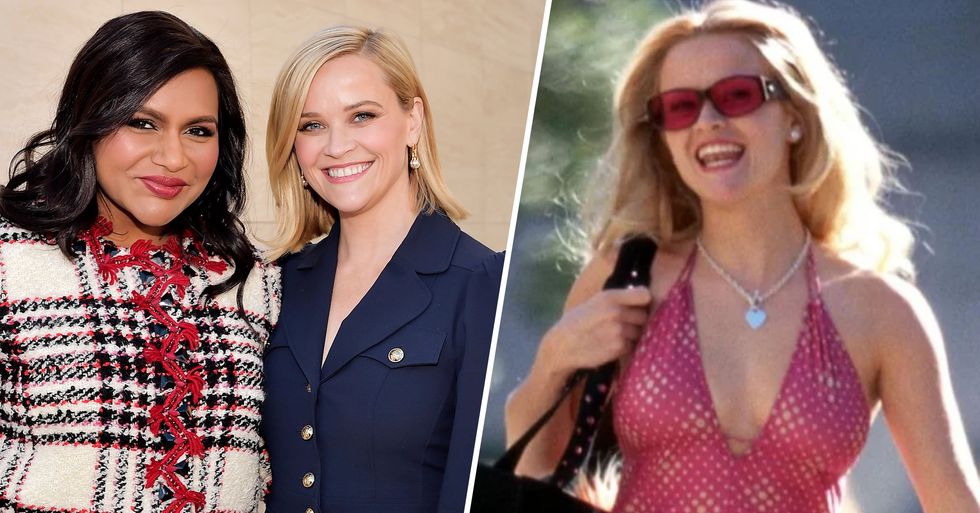 Mindy Kaling and Reese Witherspoon Team up for 'Legally Blonde 3'

For all of you Gemini vegetarians out there who have been waiting patiently for your favorite lady clad in pink to take the screen again... your wish has officially been granted.

Get ready to bend and snap, because we're officially getting a Legally Blonde 3!

Keep scrolling for all the juicy details...

We all know who Reese Witherspoon is. I mean how can we not?

She has been coined "America's Sweetheart" and according to her IMDB page, she held the role of highest-paid actress in Hollywood in 2007.

She hit the scene at the tender age of 7.

She dabbled in modeling and made her first major acting debut at the age of fourteen, the movie was The Man in the Moon.

Reese is a mother to 3, an actress, activist, and entrepreneur...

She's a woman who seems to have it all.

As you can see, the Witherspoon gene runs strong.

Yeah, she is definitely a Kween!

As expected, Reese slayed the photo shoot. In fact, I have never seen a bad photo of her.

Reese was once heard saying...

“When you look good, you feel good," or was that Elle Woods?

That was Reese’s nickname as a child. And I’m willing to bet this had something to do with the roles she takes on, and also the name of her own production company... Type A Films.

Reese has 59 movie credits to her name.

But, she’ll forever be remembered for her role as Elle Woods in the movie, Legally Blonde.

Do you remember some famous quotes from that movie?

I think mine is when “Stifler’s Mom," says, “You look like the Fourth of July! Makes me want a hotdog real bad!"

She branded herself as a role model for girls everywhere...

Women can be smart as hell, and look damn good doing it.

And if you're a huge fan of Reese's, then you should know this...

Legally Blonde 3 is in pre-production!

That's right, the highly-anticipated film just got a major update.

MGM's Legally Blonde 3 is set to be written by Mindy Kaling and Dan Goor.

Witherspoon will also produce the movie as well as returning to her role as the iconic Elle Woods.

Fans have been eagerly waiting for another film in the Legally Blonde franchise.

It's been almost twenty years since Witherspoon's character took on Harvard Law School!

Legally Blonde first premiered in theaters in July 2001... Are we really that old?

And it's since then that fans of the films have been hoping for another movie with Witherspoon's beloved character.

Witherspoon first confirmed that Legally Blonde 3 was in the works in 2018...

Sharing the exciting news on Instagram in her character's iconic bedazzled bikini, where she captioned the announcement, "It's true... #LegallyBlonde3"

Once more in April, Witherspoon teased the movie during an Instagram Live chat with Jennifer Lopez.

During their talk, Lopez mentioned that she had recently watched Legally Blonde with her kids.

And they obviously loved it...

"Oh, my god, we watched Legally Blonde the other day," Lopez told Witherspoon. "Literally, like, four days ago. Oh, my god, I forgot—I can't believe I didn't tell you. They loved it. Loved it. It was so much fun. You were so amazing in that. It's so great. And then, my daughter's like, 'I want to know what happens to her.' And I said, 'There's a 2 and a 3, I believe.'"

Witherspoon set us all off with her reply: "Well, no, there's a 2 but I'm thinking we might be working on a 3."

One thing's for sure, we can't wait for the release date, and a chance to get a load more of the iconic Elle Woods. If you're feeling nostalgic keep scrolling to find out why Clueless is returning to the big screen...
20%

$18.59 $14.87
Buy Now
See More Deals
We hope you find these deals as awesome as we do! Just an FYI: we may receive a share of sales from links on this page