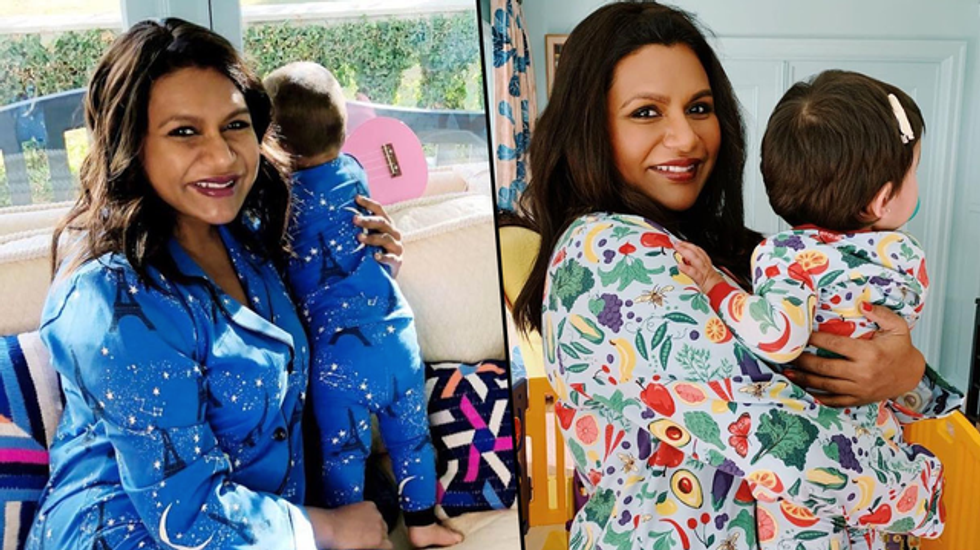 When it comes to parenting, celebrities always appear to have it so together. It leaves us other moms asking "how the heck do they do it?!"

Well, what if we told you that celebrities have it just as hard as we do, despite the fact that their parenting journeys look so damn glamorous and enjoyable compared to ours?

Celebrities undeniably have added pressure when it comes to trying to be a good parent; it must be hard to be under the constant scrutiny of the media and the public. On top of their own doubts and worries, they have thousands of people criticizing their every move and deciding whether they're doing a good job or not.

But there's one person that isn't standing for this stereotype, and that's Mindy Kaling. The actress, who has always been open about being a single mom, has opened up about her struggles and has revealed the reason that she hasn't disclosed her daughter's paternity. Keep reading to find out what that reason is.

Being a new mom can be stressful.

Just imagine it. You've safely delivered your new baby, you're adjusting to life as a new mom, you've kissed goodbye to any social life that you once had... oh, and you have thousands of strangers critiquing your every move as a new parent.

Celebrities often feel pressured to share their parenting journey with their fans.

Like having a baby isn't hard enough! A lot of celebrities document their parenting experience online to share with their followers, which can often result in them being criticized and scrutinized. That's not what a new mom needs, is it?

But there is one actress who has stuck her middle finger up at this stereotype.

Mindy Kaling has always been open about being a single mom and has kept her baby's upbringing and identity extremely private.

Mindy Kaling is one of America's favorite actresses.

You'll probably recognize Mindy Kaling from her role as aloof and excitable Kelly Kapoor in The Office, and from her self-titled show, The Mindy Project.

She's more than just an actress, however.

Mindy co-wrote and helped to produce both The Office and The Mindy Project. She is also a best-selling author, with four books under her belt.

Quite an achievement for a single mom.

Did we mention that she juggles all of that on top of motherhood? Mindy has always been one to keep it real when it comes to discussing single parenthood.

She was openly single when she announced her pregnancy.

Back in 2017, Mindy revealed that she was indeed expecting a baby.

She admitted that being a new and single mom wasn't all smooth sailing.

Last year, Mindy opened up about her initial struggles as a new parent. And, in the current, heavily-filtered world that we live in, it was incredibly refreshing to see a celebrity be so real.

She admitted that she initially had doubts when bringing her daughter, Katherine, home.

Last year, in a commencement speech at her old stomping ground, Dartmouth, Mindy explained: "After my daughter was born in December, I remember bringing her home and being in my house with her for the first time. According to movies and TV, this is traditionally the time when my mother and spouse are supposed to be here, sharing this experience with me."

But Mindy had neither of those.

Mindy's own mother sadly passed away 8 years ago after a battle with pancreatic cancer. She has always spoken proudly about her mother, who moved to the States as an immigrant from India before Mindy was born.

Her speech offered some heart-warming advice.

"Don't be scared if you don't do things in the right order, or if you don't do some things at all. I didn't think I'd have a child before I got married, but hey, it turned out that way, and I wouldn't change a thing."

She had some funny confessions, too.

In true Mindy fashion, she hilariously added, "I didn't think I'd have dessert before breakfast today, but hey, it turned out that way, and I wouldn't change a thing." Just when we thought we couldn't love her any more!

Mindy has since thrown herself into motherhood.

Can we just say... Mindy is rocking the single mom life. And she couldn't be happier. Speaking in her Dartmouth speech, Mindy gushed, "And the joy I feel from being with my daughter Katherine eclipses anything."

Though she has sadly revealed that she won't be using motherhood as material for her work.

In her interview with the New York Times, she explained, "I could write stories about mothers, about my relationship with my daughter, but I don't know. I think people are often surprised that for someone who seems as open as I am on social media and who writes things that seem drawn from my life, I find that stuff really private." Damn it.

Though she admitted that there have been some hilarious moments...

As every new mom will know, there are some pretty amusing moments that crop up in early parenthood. Mindy admitted that she's had her fair share in her parenting journey, "The three months after giving birth, especially since I did it by myself, were very funny, and at times very gruesome." But she recognized that she isn't just a comedian to her daughter, "The qualities in my life that I’m really proud of, like being a funny writer... I don’t know that my daughter loves me for any of those reasons. To her, my value is something completely different."

Speaking to Glamour, Mindy explained why she doesn't share pictures of her daughter's face: "I feel entitled to have privacy about my daughter and my relationships. It's really essential to my life that there be something not everybody knows about."

And her daughter's paternity has never been revealed.

Mindy has never discussed who the father of her child is (not that she needs to...). And she has recently revealed her reasoning behind the secrecy.

The father of her baby will continue to be anonymous.

When Katherine arrived in December 2017, Mindy left the father's information off the birth certificate. In her interview, she discussed the identity of her daughter's father. "My feeling is that until I speak to my daughter about that, I’m not going to talk to anyone else about it."

It makes so much sense.

Because, if her daughter doesn't know, why should the rest of the world?

There's no one way to be a mom.

As Mindy has proven, there are so many different types of parents out there. And there's no one correct way to do it! If, like Mindy, you're doing it alone, just remember - You're doing an amazing job.