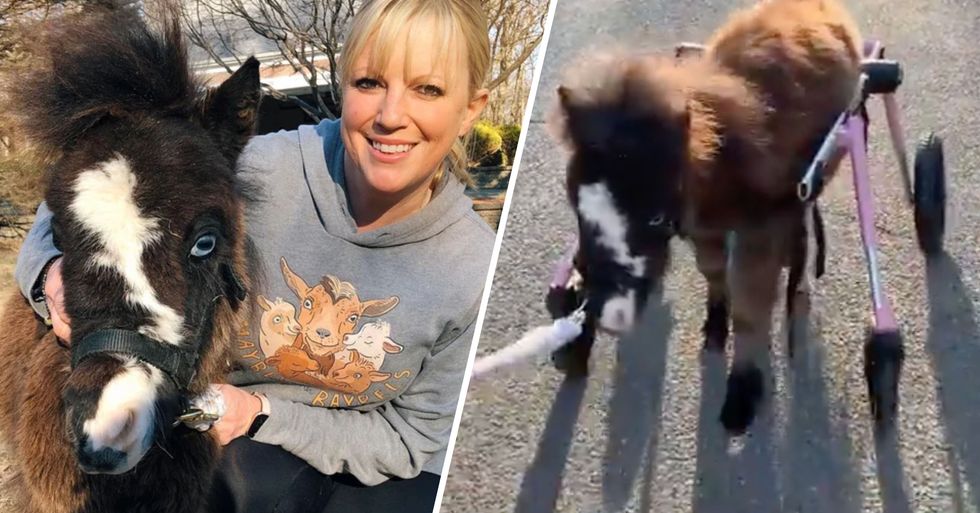 Mini Horse Named Teaspoon Can Trot Again Thanks to Wheelchair

One miniature horse named Teaspoon has recently been offered a helping hand by some kind vets after being left unable to walk and the results are incredible.

Of course, when it comes to injuries regarding mobility...

Animals can't exactly be sat in a wheelchair as us humans can.

But with thanks to some creative vets...

Many animals can now heal their broken bones with a make-shift wheelchair specially designed for our 4-legged friends.

Goats of Anarchy are an organization that specializes in this kind of treatment...

The organization, which is based here in New Jersey, runs a sanctuary for disabled goats and other small 4-legged animals who require wheelchairs, prosthetics, and just overall care and shelter.

The charity puts everything into caring for their patients...

And all donations go toward shelter, food, vet bills, and prosthetics/wheelchairs for the animals under their care.

As mentioned earlier, the charity don't just care for goats...

And their most recent patient has certainly stolen a lot of hearts around the world after going viral on social media.

The miniature horse is only 5 months old and she has landed herself in the care of Goats of Anarchy after being bitten on the back of her leg by a venomous snake a few months ago.

And because of the snake bite, her leg became necrotic and it was sadly amputated earlier this month.

Her former owners realized they wouldn't be able to care for the little horse following the operation...

Which is how Teaspoon became sheltered with Goats of Anarchy.

When the charity started posting pictures of Teaspoon online...

Walkin' Pets - an organization that specializes in animal wheelchairs - wanted to help and they built their first-ever horse wheelchair for her especially.

She has already been on a few practice walks...

And it didn't take her long to get used to her new method of transport!

She took to walking like a fish to water!

We wish the little horse a speedy recovery!

To help contribute to Teaspoon’s care and learn more about Goats of Anarchy, visit the rescue’s website here. Make sure to keep scrolling to learn about the parrot who received some brand new wings from a kind vet...