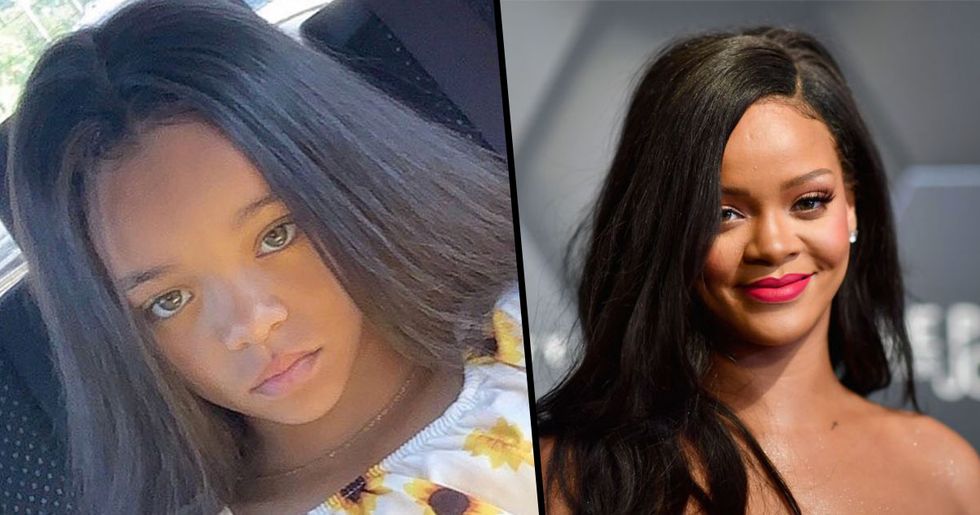 As the Faceapp madness continues, you'd think we'd be used to seeing celebs looking outside of their usual age range. But one image posted on Instagram this weekend has blown everyone's minds. The reason? It seems that it was taken without the use of Faceapp at all.

One Insta-mom known as Bria Kay has long been posting snaps of her (undeniably cute) daughter. But one picture went viral this weekend for a pretty bizarre reason. It looks exactly (and some would say "suspiciously") like a baby Rihanna.

The star herself reposted the image - and now the internet has some theories about how this mini-doppelganger came to be.

Over the past week, a certain app has taken over the internet.

Faceapp, an innovative piece of photo-editing software, manages to effectively age photos and give us all a glimpse into the future.

And celebs have really leaned in to the trend.

There have been countless images posted by celebrities on social media after using Faceapp - although this double-vision image from Jared Leto is certainly among the best.

While Rihanna didn't post an image on herself, she didn't escape the Faceapp treatment.

Last week, this image of the star circulated looking more like a rock 'n' roll grandma than her usual flawless self.

But now, a certain image has had the whole internet double-taking.

And the reason? In spite of much internet suspicion, the image is not altered with the famous app. In fact, it's a much more bizarre optical illusion.

This mom-of-one, named Bria Kay, uses her Instagram for all the usual things - sharing stunning selfies, impressive nail art shots, and, of course, snaps of her cute daughter.

Here they are together.

So far, so normal, right? This is an undoubtedly cute mom and daughter pair - but surely nothing to make the entire internet go crazy, right?

In a few of the images posted on Bria's Instagram, the focus is portraiture shots of her beautiful six-year-old daughter. But more than just looking gorgeous - many have noticed that this kid looks a little familiar.

Because people have pointed out a similarity.

Thie child bears a striking resemblance to a certain singing superstar and entrepreneur.

But there's one snap that has really sent the internet wild.

And, initially, there was one major question. As Faceapp has been so prevalent on the internet lately, it only made sense for people to jump to a conclusion.

That this image was just another clever example of photo-editing trickery.

But it turns out that this wasn't the case. This was a real-life, unedited snap that looked exactly like Rihanna as a six-year-old. Crazy stuff.

The internet had some pretty hilarious reactions.

Some took the opportunity to joke about Rihanna's impressive (and ever-expanding) business empire.

Another suspected that the child may be an actually Fenty relative.

And although she hadn't taken a hiatus for being pregnant, some suspected that she had ... other methods.

Others went for this classic Ririr critique.

She's eager to drop new products, launches, and business ventures - but she sure is slow to give us the album that we've been waiting for.

But some fans are hopeful.

Hey, if there's a new Rihanna, at least we have double the chance to get some new music, right?

Here's the picture that got everybody talking.

You have to admit, it's pretty freaky how much this supposedly unrelated child looks like Riri.

And, you know how, normally, you never see the similarities between you and your supposed "lookalike?"

Well, that isn't the case here. Because even Rihanna has noted the similarities between her and this mystery child, claiming that seeing her doppelganger almost caused her to drop her phone.

And although this one particular snap was the most Rihanna-esque...

There's no denying that the kid bears an uncanny resemblance to Riri - in every picture that Bria has posted.

It seems like friends of Bria had pointed out the resemblance before.

Many of her Instagram photos are filled with comments of people pointing out the Rihanna-like nature of her daughter's appearance.

And many have one overriding emotion.

If this kid looks this much like Rihanna now, we can only imagine what she'll look like in the future.

There's something about a doppelganger that just makes your mind do a double-take.

And if you enjoyed this mini-Rihanna, you're going to love scrolling through thirty of the very best identical celebrities.