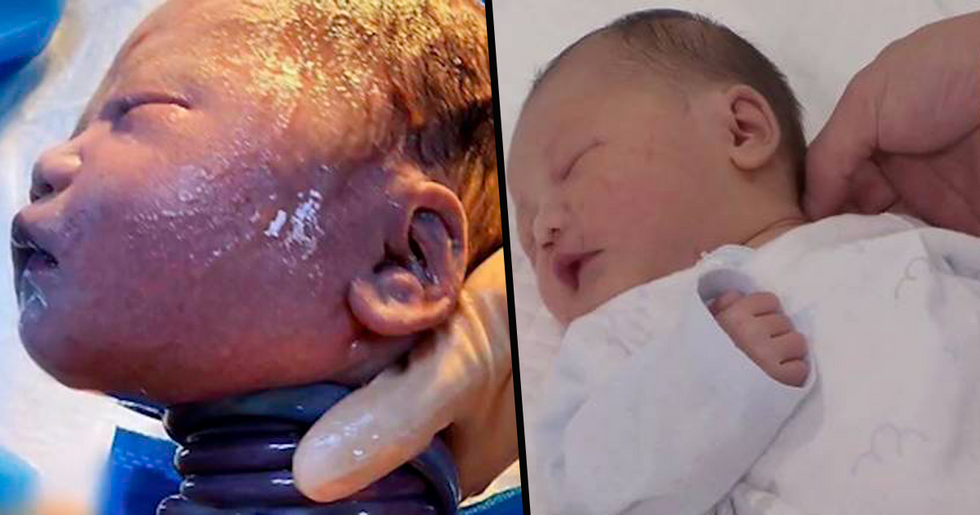 A newborn baby has miraculously survived after being born with the umbilical cord wrapped around his neck 6 whole times... The photo from the birth really is something that needs to be seen to be believed.

The whole thing is magical, and it truly releases the inner warriors in women after a grueling 9 months of pregnancy.

This can depend on the woman's genetics...

As well as her tolerance to pain, her body type, and even the size of the baby.

But, in some more severe instances...

Childbirth can bring with it many perilous complications.

Some women can experience a whole array of health issues during childbirth...

Meaning that, sadly, not every baby is born in good health.

Some babies are incredibly ill upon their arrival into the world...

And, in some extreme cases, they don't make it past being a few hours old.

But, there are always exceptions.

Some babies are so keen for a taste of life that they go on to defy all the odds by surviving these incredibly traumatic deliveries.

And now, doctors in China have recently hailed one of their arrivals as a "miracle."

The delivery, which took place at the Yichang Central Hospital in the city of Yichang in western China's Hubei province, has recently gained viral attention for the most remarkable of reasons.

The baby boy was born naturally...

But, when he arrived, doctors were stunned by what they saw.

The umbilical cord, which is the structure that connects the baby to the placenta, had wrapped itself around his neck...

Now, having the umbilical cord wrap around a baby's neck during childbirth isn't too uncommon...

And, usually, doctors are able to quickly free the baby's airways with minimal damage.

However, in some instances, the umbilical cord can be wrapped too tightly...

Meaning that doctors are unable to free the baby in time, resulting in suffocation and, eventually, death.

So, when this baby arrived with the cord wrapped 6 whole times around his neck...

Doctors were, quite understandably, very concerned for his wellbeing.

Director of obstetrics, Li Hua, told reporters: "I have been working for twenty-three-years, and this is the first time I have seen in umbilical cord wrapped around a baby's neck like this."

Medics said they had already detected that the umbilical cord was wrapped around the baby's neck prior to his birth...

But never had they anticipated that it would be wrapped that tightly and that many times over.

Here's a photo from moment he emerged into the world.

Thankfully, the doctors were able to remove the cord...

And the baby suffered no serious health defects.

The mother, identified by her surname of Dai, thanked medics for their heroic work, and said:

"I'm glad that my baby has no problem." For more on controversial baby stories, keep scrolling to see the controversial moment an 8-month-old was thrown into a pool...