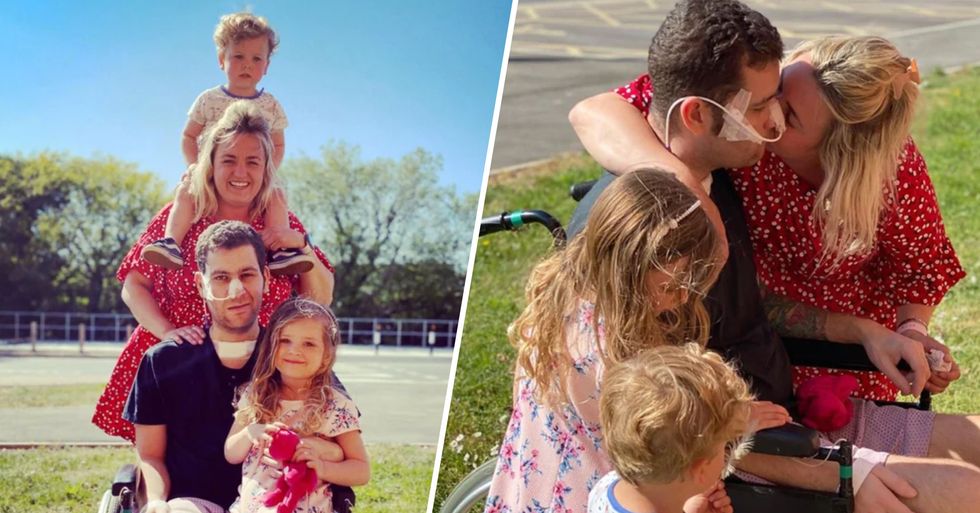 After being on a ventilator for thirty long days and after experiencing multiple other life-threatening illnesses during that time, a father managed to walk out of the hospital and reunite with his family on his son's second birthday. If that isn't strength, then I don't know what is.

Keep scrolling for the most heartwarming video you'll ever see...

Millions of people all over the world are currently in lockdown for a very important reason.

Staying indoors for extended periods of time will understandably wreak havoc on anyone's mental health but it will be worth it in the long run.

But the people who are already suffering from underlying health conditions or other diseases are at the highest risk...

But one father recently proved that miracles are possible.

After relying on a ventilator to help him breathe for the past thirty days, this one father survived multiple illnesses to be able to reunite with his family.

It all started in mid-March when Omar Taylor had to call the emergency services.

He already had a previous history of illnesses including a pre-existing condition of ulcerative colitis, a bowel disorder that meant he had to take tablets for.

But soon, he started to have serious breathing difficulties...

And was admitted into hospital and diagnosed with the deadly virus. Doctors have said that his condition was the sole reason why his immune system was lacking and made it easier for him to contract the disease.

After only 4 days in the hospital, he got worse.

Omar was rushed to intensive care where he was put on a ventilator that he had to keep using for the next month. But in addition to all these serious issues, he was also diagnosed with sepsis and heart failure.

And if this poor man hadn't been through enough already, he also suffered two strokes.

This led to him being put into a coma from which doctors told his wife, Kaitlyn and children, Vivienne and Harrison, that he was most likely to die from such a devastating string of health problems.

Kaitlyn, who is a student nurse, described the ordeal.

She told the Daily Mirror this: "Omar was struggling to breathe for three days, even though he was being given the highest possible amount of oxygen through a mask," she said. "Then one day I received a call from the hospital at 4:45am telling me to prepare for the worst. They had decided to intubate him and put him in an induced coma. I had to look at my four-year-old and my two-year-old and think about how I would tell them that their father was dying."

Having 2 young children made it all the more heartbreaking.

"It has been so difficult, particularly with two young children. Harrison, who is two next week, didn’t understand and was scared of his dad for the first couple of hours after he came back."

"In total, he was away for eight weeks. That’s not so long for an adult, but for children, it seems like forever. They didn’t think he was ever coming back. This has been everyone’s worst nightmare. But the support we have received has been overwhelming."

And all the prayers and support really did pay off in the end.

At one point, they did run out of hope when the doctors told them to prepare for the worst, but in a shocking turn of events, Omar survived! After he woke from his coma, he was left speechless and paralyzed, but his family were just thankful that he was alive and still smiling. What an amazing man.

He also tested negative for the virus, which meant he could see his family again.

"It was so emotional. He was in a wheelchair and we met him out in the open air. Before then, when we spoke to him on a video call, he had a blank stare and we didn’t even know if he could recognize us. It was as if he was looking through us. But when we saw him, he was smiling and able to put his arm around the children. It was the first time in six weeks that he had seen someone who wasn’t wearing PPE, let alone his family. It was magical."

And not only that, but he made it out of the hospital in time for his son's second birthday!

"It was utterly overwhelming," Kaitlyn said. "He was determined to get out in time for our son’s second birthday and he did it. We're going to have a really big party, just the four of us. It was amazing seeing everyone coming together to welcome him home."

He even managed to regain some of his speech back.

Despite being told he may never be able to walk or talk again, Omar was determined to make the impossible, possible. On his way out of the hospital, he managed to walk himself out with nurses and other healthcare professionals standing by his side and applauding his bravery.

It was truly a heartwarming moment.

He is now going to start a rehabilitation treatment to help him regain his strength.

Doctors have told the family that because of his amazing progress already, they are pretty sure that he will be able to achieve 90% of his strength back by the end of the year.

Kaitlyn also told us about how her daughter felt when her dad came home.

"Vivienne, our four-year-old, is a proper daddy’s girl and hasn’t left his side since he’s been home. She’s been helping him to the toilet and the shower and she’s just so, so happy that he’s home."

"There’s a long road ahead and it will be a difficult time for us all. But we're so lucky that my husband is alive."

She also spoke on behalf of her husband and his wishes, saying this:

"Omar can’t speak properly but I know he would love to give a big thank you to everyone who has helped us, from friends to frontline staff."

Here's the video of Omar walking out of the hospital after weeks of intensive care:

A truly remarkable story. We wish Omar and his family the best. If you want to read another positive story, then keep scrolling...