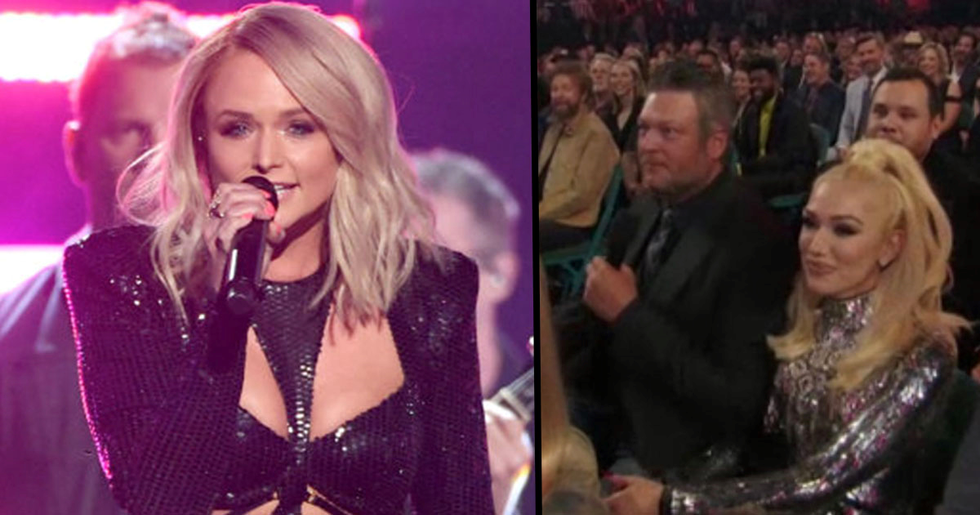 We all know how we would like to act when faced with an ex, but sometimes things don't always go to plan...

All of your intentions to appear cool, calm and collected suddenly seem to go out the window when faced with a blast from the past (and their current, super hot girlfriend). And we are pretty sure that's exactly what happened to Miranda Lambert at the ACM Awards on Sunday when she made a very obvious lyric change to her hit song, "Little Red Wagon".

We won't spoil the surprise, but let's just say that Blake got stung! Hard.

And Gwen's reaction will shock you even more. Scroll to the bottom of the page to check out what she said!

This is Miranda Lambert.

Raised in Texas, she was brought up surrounded by country music and her appreciation for country stars fueled her desire to learn the guitar and write her own songs.

But it was her appearance on Nashville Star in 2003 that really catapulted her career forward.

Despite only finishing third, her fiery performances caught the eye of the show's judge, Sony Music executive, Tracy Gershon. Before she knew it, she had been signed to his label.

She then went on to sign with Epic Records and she released her debut album, Kerosene.

Her debut album became number one on the Billboard Top Country Albums charts and also gained a platinum certification for shipments of over one million copies. Now that's pretty impressive.

Her second album, Crazy Ex-Girlfriend, was released in May 2007.

The album's third single, Gunpowder & Lead was her highest charting single ever and was written while she was taking a concealed handgun class in her hometown!

It was at this time that she was compared to Dolly Parton by The New Yorker.

Writer, Fady Joudah, said that the album proved that Lambert "has talent and charisma on par with Dolly Parton, another blond beauty who was once underestimated." High praise indeed.

In between all this success, Lambert began dating singer Blake Shelton in 2006.

Although, when they first met, Blake was still married to Kaynette Gern.

Blake Shelton was married to Kaynette Gern.She was his longtime sweetheart,manager and the woman he divorced to be with Miranda Lambert 😳😐
— Maria T (@Maria T)1437416811.0

Miranda said, "I knew he was married. I had seen their wedding pictures in Country Weekly. I knew better, like, this is off-limits." Fine words, but clearly ones that she would later forget.

Miranda and Blake were paired up to perform at the CMT 100 Greatest Duets Concert in 2005 and it was plain for everyone to see that love, or at least lust, was blossoming.

Blake later revealed: "I've never had that kind of experience with anybody. I was a married guy you know? Looking back on that, I was falling in love with her, right there on stage."

Blake went on to divorce Kaynette in 2006.

Although both Miranda and Blake remain adamant that their love affair didn't begin until the divorce had finalized. Do we believe them? Hell no!

An unstoppable duo, Miranda and Blake got engaged in May 2010.

Shelton proposed with a big diamond ring during a walk through Tishomingo woods after asking for Lambert's father's blessing. They got married the following May at the Don Strange Ranch in Boerne, Texas. Guests included Reba McEntire, Dierks Bentley, CeeLo Green, and Charles Kelley.

Their careers continued to flourish, as did their love. Or so it appeared.

They performed at the Super Bowl Pre-game Show together in 2012 and Blake was constantly mentioning his wife's name on The Voice, in which he stars as a coach.

But it wasn't long before the cracks in their relationship started to show.

Reports in the media claimed that they were on the rocks, which certainly did not help the situation. This was on top of constant speculation about a possible pregnancy and claims that there would be an imminent divorce.

Perhaps trying to prove the doubters wrong, they put on a united front when they sang together at one of Miranda's concerts in Wichita.

Making a surprise appearance on stage, Shelton sang "God Gave Me You" with Miranda, causing her to cry with emotion. But were these tears of joy or sadness?

On July 20th 2015, they announced that they were getting a divorce.

And the news hit fans hard. Some still haven't got over it. Shelton said at the time: "So, it was like once we filed for divorce . . . it was like a nine or ten day waiting period until it's over. By the time anybody knew anything, it was over. It was done."

But they both seemed to move on pretty damn quickly.

Blake started to date his The Voice co-star, Gwen Stefani, a mere two months after his divorce from Miranda was finalized. And they have been together ever since. But are they still happy after Miranda's performance at the ACM awards? Keep reading to see Gwen's reaction to recent events...

And Miranda didn't exactly waste much time either.

In December 2015, it was confirmed that she had started dating R&B singer, Anderson East, after meeting him at Nashville's "Live on the Green" Music Festival. We really weren't sure about these two together!

This relationship was not meant to be.

The couple announced in April 2018 that they had split up two months earlier after two years of dating. And Miranda had already moved on with Evan Felker, the frontman of Turnpike Troubadours. But this fling was shortlived and they split in the August of the same year because, apparently, Evan "broke her rules", whatever that means!

Clearly, this a woman who doesn't like to be on her own.

Because in February of this year she announced on social media that she had married New York City Police Department Officer, Brendan McLoughlin. This lady does not hang about!

So now we're back to the present day.

And it would appear that Lambert isn't completely at peace with her ex-husband, Blake Shelton, despite appearing completely loved up with her new husband. And who can blame her! He's hot.

Lambert took to the stage on Sunday at the 2019 Academy of Country Music Awards to perform a medley of her hits.

But it was during her performance of her 2014 hit single "Little Red Wagon", that was released when she and Blake were living together in Oklahoma, that the proverbial sh*t really hit the fan.

Miranda made a very obvious lyric change that appeared to be directed at Blake.

Instead of singing the original lyrics, "I live in Oklahoma", Miranda sang "I got the hell out of Oklahoma." And she sang those particular words with such passion... or was it contempt? Ouch. That must have hurt.

We don't really blame Blake for looking like this after Miranda's little performance...

But unfortunately, we will never know exactly how he reacted, as the camera didn't pan to the couple during Miranda's performance. Damn it!

But it's not the first time that she has sung these new and improved lyrics.

Miranda has, in fact, been singing this new version of the song at many of her live shows. But many watching the awards thought that she was purposely throwing shade at her ex, who attended the show with Gwen.

But if these pics are anything to go by, the couple don't seem that bothered.

These are definitely not the faces of a couple who have any worries or have in any way been affected by an apparent insult that was sent their way earlier in the evening. Their smiles don't look forced at all. They look happy and content in each other's company.

Blake also took to the stage to perform his new single, God's Country.

Many fans praised him for a great performance, despite Miranda's put-down, which took over as the main point of discussion. Thunder-stealer!

Some seem to think that Miranda was right in what she did. We're not really sure where they are coming from there, but each to their own!

But the majority definitely sided with Blake.

@oakleybri Hes clearly over it, maybe she should get over it too? All it showed was that she is the QUEEN of pettin… https://t.co/FWfQYPODXK
— Marky Mark (@Marky Mark)1554708580.0

And we kind of agree. It's been four years, Miranda. Move on, for God's sake!

@oakleybri We should all remember country songs are about things that happen in life that is what makes a great son… https://t.co/qDvpnkSRET
— Marla Anderson (@Marla Anderson)1554704100.0

Country music is all about heartache and unrequited love. Maybe this was just her way of dealing with the past through music.

Even though the cynic in us really believes that she probably just wanted a bit more publicity.

Or maybe that's a bit cruel...

And, apparently, Blake and Gwen just laughed the whole episode off.

A friend close to the couple said, "Gwen was embarrassed for Miranda as a result of it appears apparent to her that Miranda seems desirous regardless that she is now married and seems to have moved on, she clearly hasn't." #Burn