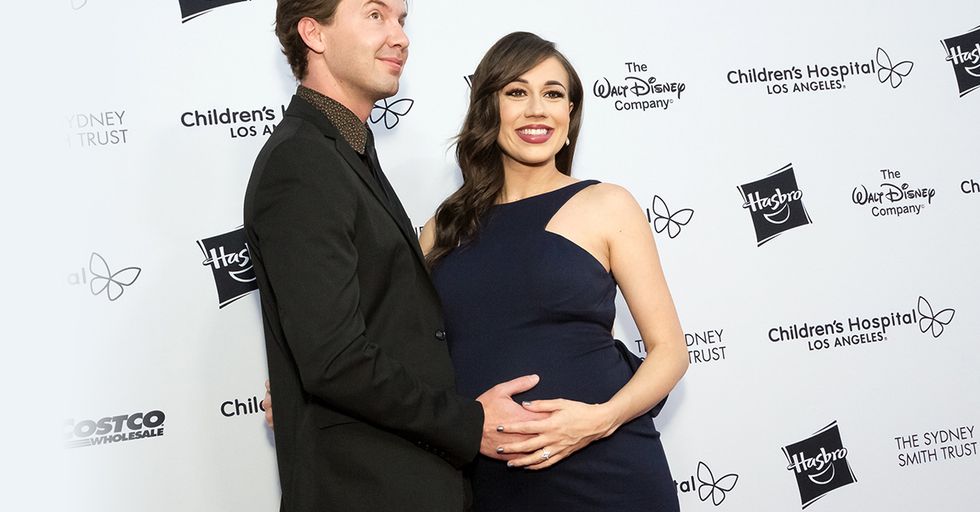 Remember when you were young and naive and thought, "When I have kids one day, I'm going to be one of those parents who have it together! Who puts themselves first, doesn't live in yoga pants and actually has a life outside of my kid!"

And then reality sets in and you laugh at that younger, dumber version of yourself and you realize that's not at all what parenthood is like. Well, it may be for some people. And that's okay! Good for those people! But for others, that type of reality doesn't exist.

Being a parent is hard. It's the most thankless, wonderful, beautiful job out there – but it's brutal. Everyone warns you that, yes, it's hard but wonderful, but nothing can actually prepare you until you're just thrown into the battlefield.

Some of us may think that certain people have it easier than others when it comes to parenthood; namely, celebrities. And sure, while they may have more money, when it comes down to it, being a parent is still stressful.

You may know Colleen Ballinger more commonly as her Internet character, Miranda Sings.

She launched to stardom thanks to her hilarious YouTube videos which led her to land her own Netflix show and tour her comedy show worldwide. She's a funny queen with over 10 million subscribers to her channel.

In December 2018, Ballinger gave birth to her first child with husband Erik Stocklin.

The Internet superstar recently posted a tweet that soon had a lot of traction. She posted a mirror selfie, with a stained tank top and flashing the peace sign.

Ballinger called attention to the fact that social media can often paint an inaccurate picture of parenthood.

i see a lot of moms online who portray a perfect, easy lifestyle. but this is a more realistic version of what moth… https://t.co/s0xXVDAWat
— Colleen Ballinger🎗 (@Colleen Ballinger🎗)1547695229.0

"I see a lot of moms online who portray a perfect, easy lifestyle. but this is a more realistic version of what motherhood looks like," Ballinger tweeted.

Women rallied behind the actress and comedian, echoing her sentiments. As Ballinger said, "the messy stuff is beautiful too." Ain't that the truth?

Some people pointed out the other not-so-glamorous aspects of being a new mom...

The smell of baby puke in one's hair – what a dream! Worth it for those little ones, though.

This is as real as it gets. When people keep it real on social media, it's a beautiful and unifying thing. It's easier to relate to someone who is being honest, than someone who is perfectly manicured at all hours of the day.

Okay, this is making me tear up...

Hot chocolate and snuggle time? Um, sign me up, please. But it's true – I think about all that my own mother sacrificed to make sure I grew up with tons of opportunities. Mothers are astounding!

A lot of women were grateful for the transparency that Ballinger showed in her tweet.

Baby barf is so chic. Totally the latest fashion trend.

Ballinger was also candid about her pregnancy journey, which a lot of people appreciated.

Not everyone has a glam squad on call when they're pregnant. (Though that would be amazing.)

Even women who aren't moms can relate...

I can relate to this 100%. My room is full of empty glasses that once held water. Oops.

Every mother's journey is different.

This brings up an excellent point - there shouldn't be shaming either way. Whether you are a mom who has extra help and loves to dress up, or a mom who lives in sweats, it doesn't matter. There's beauty in the mess as well as the easy times.

And you deserve it! Nobody deserves a drink more than a mother, that's for sure.

Honestly, as a mother to two insane cats who keep me up all night destroying my apartment, I relate to this. It's totally the same as parenting, right?

This is an excellent metaphor.

"Forget about finals week, you ain't sleeping at all" is hilarious. This entire tweet should be on a t-shirt.

The "husband getting lots of rest" is very funny. *Side-eye emoji.*

The sarcasm is real.

You've got to have a sense of humor right? I mean, what else are you supposed to do with the sheer amount of exhaustion.

Shout out to the toothpaste cap!

People get real on the Internet.

@ColleenB123 This is literally how I feel during my pregnancy. People show it as something so easy and talk about h… https://t.co/H2mPFAxzDw
— Tiana Elizabeth (@Tiana Elizabeth)1547736989.0

For some, it's easy. For others, well, it's definitely not.

Ballinger's photo actually got some people excited for motherhood!

It does seem worth all of the barf and poop and messy hair.

The mom strugg is real.

What is the average amount of sleep a mom gets in the first 3 months of her child's life? I'm scared to know the number.

Ballinger's tweet isn't the only place on the internet where mothers and fathers gather 'round. to lament the struggles of parenthood.

Being a new parent is totally overwhelming, and Twitter is the perfect place for new parents to take out their anxieties.

Asked to switch seats on the plane because I was sitting next to a crying baby. Apparently, that's not allowed if the baby is yours.
— Ilana Wiles (@Ilana Wiles)1392242853.0

This is hilarious. You never stop to think about how the parents of the screaming airplane baby feel.

This is my biggest fear.

Not to be rude, but NO, I DON'T WANT TO HOLD YOUR BABY BECAUSE I'M SCARED I WILL DROP YOUR BABY. They should give lessons on how to never, ever drop a baby.

Welcome to your new life...

I just realized that I have now literally cried over spilt milk. #newparentlife
— Pixelfish (@Pixelfish)1520820003.0

Spilt milk will literally make you dissolve into a puddle of tears. There will be nothing you can do about it.

Baby puke, but make it fashion.

If you wear anything with confidence, it becomes a statement! Rock it, new mamas!

Lost my keys between turning the car off and getting out of it. #newmombrain
— Arin Liberman (@Arin Liberman)1476803818.0

Simply getting out of the car used to be so easy. Now? It's a giant task that may never seem to end, you can only hope that it'll go smoothly.

A human? What's that?

For Halloween this year I'm going to shower & put on makeup & do my hair & dress up as a human. It will be spooky. #newmomproblems
— Amanda Bumgarner (@Amanda Bumgarner)1443123972.0

What a glorious costume idea.

Stay away from WebMD!

It's not worth the panic and anxiety that will come from googling your baby's symptoms. Just don't do it.

A parent can dream, can't they?

To be able to snooze the baby monitor would be a dream, wouldn't it? Sorry, baby. I can't hear you!

In the end, it's all about celebrating the entirety of the journey.