Misbehaving at Your Christmas Party Could Get You Fired | 22 Words 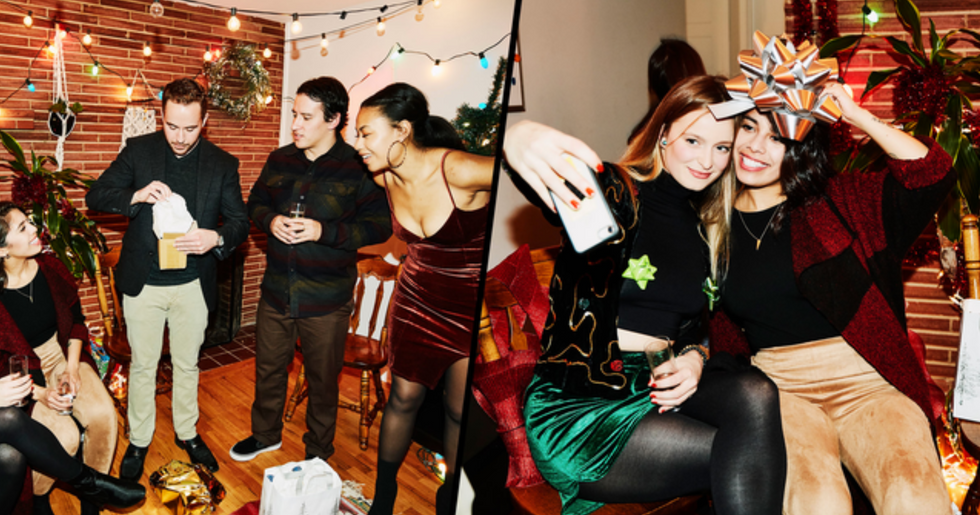 Misbehaving at Your Christmas Party Could Get You Fired

Whilst many of us are anticipating our annual Christmas staff parties, we should beware.

Putting party and office into the same sentence can create a whole load of confusion.

Those that find themselves stripping off in front of the cleaners after downing a bottle of red might find that they don't have a job tomorrow.

As much as it can be tempting to go hard at your office Chrimbo party... being unemployed right before December 25th would be a real bummer.

They offer employees a chance to unwind and form closer bonds with one another. There is no better way to get to know your colleagues than at the Christmas staff do. That being said, it's not always as simple as that. In 2015, NPR anonymously interviewed a bunch of people about their worst work Christmas party experiences. The responses were pretty interesting. In order to help you survive your Christmas office party, I will use these examples to highlight what you should and shouldn't get up to. That is if you want to keep your job, of course.

Make sure you eat beforehand.

Most office parties begin right after the working day is over. If you haven't eaten since lunch you should make sure to grab a bit to eat before knocking down any shots.

If you don't, you'll get drunk much quicker.

As one unfortunate Christmas party worker discovered... She wrote into NPR divulging: "One party 20+ years ago served a delicious white wine. To remain svelte in my fitted dress, I skipped the hors d'oeuvres and just visited the wine station. I did not realize until far too late that I had over-indulged.  So great was my embarrassment that I skipped the party the following year."

Trust me, you will get sacked if you end up hooking up with a colleague in the restroom. As one anonymous person discovered at their office Christmas party...They wrote in: "I had three co-workers who lost their jobs due to behavior at an office holiday party, which they most likely wouldn't have engaged in if they hadn't been drinking. Let's just say they were discovered in a restroom, and they weren't resting."

You cannot hit on anyone you like. Take this woman's office party story as proof. She said: "When my husband and I were still dating, one of his co-workers kept hitting on me the whole night at their Christmas party; it was cute at first, but the more he drank, the more advanced it got. ... I think he forgot it wasn't a frat party and we weren't in college anymore."

Don't say you smoke, if you don't smoke.

So you've had a few glasses of vino and you want to impress that certain someone in the office. Trust me that coughing through a pack of cigarettes will do nothing to increase your chances. Take this classic example: "It was an open bar. I got so drunk that I smoked half a pack of my friend's cigarettes (I don't smoke). I also confessed to my best friend/co-worker that I was in love with him." Which brings up another important point...

Beware of the open bar.

Now the idea of an open bar can sound great but in reality, it will encourage you to drink much more than you would normally be privy too. The work Christmas party is not the place you want to be getting more drunk than you usually do.

If you're a boss, you need to be even more careful.

Whilst it's bad for the average colleague to make a show of themselves, it's even worse for a manager. Take this classic example..."My former boss got very drunk at a Christmas/my birthday party. She told my date that he was stupid. She used foul language in front of my mother. And said inappropriate things to my 15-year-old daughter. No, she didn't make it work the next day." You can just imagine how embarrassed that boss must have felt when she woke up the next day. Liquor really can be quite the fiend.

For some reason or another, many work Christmas parties fall mid-week. This means that whilst you're necking the free spirits, you should probably remember that you're back in first thing and you should probably set your alarm... and put the vodka down.

If your Christmas party is actually in the office, remember one thing...

Be aware of your surroundings. You may well be around, expensive laptops and equipment, so the last thing you should do is try and start dancing on the table. Take this person's office Chrimbo party story: "At our company Christmas party last year, one of my co-workers had a little too much and face-planted on the desk. Ouch."

If someone offers you one of their special festive mixes, I would advise that you decline. The trouble with Wendy from accounting's mix is that I guarantee it will have way more gin, and rum, and god knows what else in it than you could ever have imagined. Which will be no comfort to you when you find yourself crying outside your ex's house at 2am

You know what, it's better to be safe than sorry. I recommend you avoid cocktails because they get you drunk quickly and without you realizing. It's hard to keep track of what your drinking when it's under the guise of some mumbo jumbo name. Take this woman's dreaded encounter with eggnog... "At an office party four years ago, a fellow co-worker brought eggnog that contained whiskey, Scotch, as well as bourbon. ... It was delicious and the booze was nigh-undetectable. Everyone became incredibly sloshed."

But wait, the story doesn't end there. Oh no...

I mean, what do expect after they'd all drank that sneaky eggnog... They go on to write: "As the night progressed, someone made a makeshift slip-and-slide in the warehouse that was quite fun until the IT guy of the office broke his collarbone going face first and 911 was called. We still talk about this office party to this day." Well, I mean at least it gives them something to talk about!

It can be hard to act normal in the work environment.

If you work in a strict, formal work environment, being able to switch off from your work self can be hard at a work party. But trust me, getting seriously drunk will not resolve the problem.

If you aren't a big drinker, maybe don't drink?

If you don't really drink then the likelihood is that your tolerance to alcohol is seriously slim. Do not on any account try and keep up with others around you. Some people drink loads, all the time. These people could drink all night and still be standing.

Leave while you're still having fun... that's what my mom used to always say. If you're not having fun after twenty minutes, it's still okay to leave then. Anything over ten minutes I'd say proves you tried. Think to yourself, what's better; to bow out early and get a good night's sleep, with the knowledge you haven't embarrassed yourself. Or getting really drunk because you feel awkward. Trust me, sad drinking at your office Christmas party will always lead to you crying outside your ex's house.

You can always pretend to drink...

This is something my little sister likes to do at the end of the night when the rest of her mates are on the way to getting bladdered enough to cry outside their ex's house. When someone asks what you're drinking you can say anything, vodka, gin, paint thinner, whatever. This will mean you are complete control and will prevent That Guy from saying: "Go on, have a drink."

Leave that Chrimbo party like the sophisticated catch you know you are.

Leave getting bladdered and making a fool of yourself to situations that don't involve people that could very well fire you for misconduct.

Save excessive drinking for when you're at home with your parents...

That way they're the only ones that can see how much of a mess you've become... and the likelihood is that they will still love you anyway. After all, it's Christmas! Continue scrolling for more Christmas survival tips. This time we're talking about what you should do if you can't afford a Christmas tree... or what you should do if you don't know what to do with all them empty green bottles. Trust me, this one is a cracker...