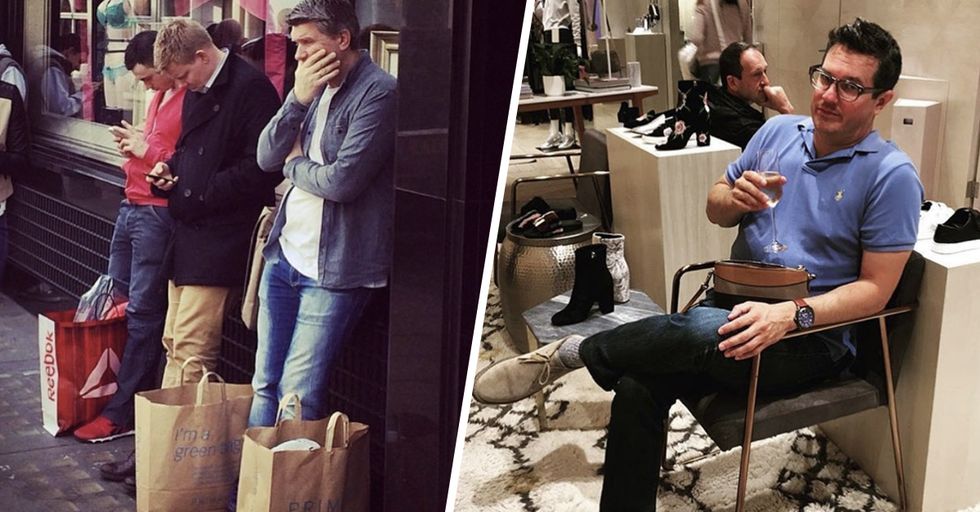 Listen, it is 2018 and men are finally starting to get what has been coming to them for centuries. Women have spent all of eternity being oppressed and pressured to fit certain societal norms. Men have had it so easy. So now, finally, it is time to watch and revel in images of men being so bored and miserable while they are out shopping.

Shopping has long been misgendered as a woman's activity. And the trope of a miserable man dejectedly carrying his wife's purse around the mall while she shops is honestly more harmful to women than anything. So I want to say that we don't know why the men highlighted on the Miserable Men Instagram account are miserable. They are usually in public places, stores, malls, etc. What I do know is that as a woman, it feels good to see men look less than thrilled with their circumstances. It's about time.

I don't think the guys in Miserable Men like being miserable necessarily...

But I like watching them be miserable– I think it's funny. And that's what matters.

These guys are right by the men's shoes, so there's really no excuse for their miserable glances. They're just tired.

This man only looks like Einstein because the real Einstein would never be bored and miserable. His mind was always working.

This dad looks really defeated, but that doesn't stop him from getting his squats in at the mall. Exercise on the go!

What a sad sleep!

This picture is priceless. He's napping, but he's really upset about it.

I like how this group wore matching t-shirts for their big outing. It's like they wanted to clarify that they were all in this miserable mess together.

If you have to be a man bored to death while shopping, the best place to be that in is IKEA. They've got comfy couches and stuff!

Ah yes, the old "If I wear sunglasses, they won't notice that my mouth has dropped open and I'm drooling because I'm asleep" trick. It doesn't work.

From the looks on these kids' faces and the bags on the floor, it looks like they've been dragged all around town on this shopping day.

Oh, I know this spot and this look very well. That's a man, sitting outside a Macy's dressing room, questioning every life decision he's ever made.

That baby has totally given up, which is exactly what the dad wants to do, but he's responsible for holding the baby, so he can't.

I really can't understand people who can fall asleep anywhere. Why isn't he guarding those bags with his life?

There seems to be a uniform for the miserable mall guy, and it consists of an old man jacket, old man pants, and orthopedic sneakers.

At least this guy isn't wasting time. He's figuring out what he needs to figure out with the credit card company while he waits.

This is what you have to do! Relish the opportunity you've been given to drink free bubbly and sit for a while. Don't give me that face!

Wow! This store has a complete set. That's so impressive.

The lower he gets, the higher his pants get. That's the law.

This guy just had an epiphany, realizing that this is his life now and he'll have to get used to it. Sorry, I'm not sorry bud.

Um, I'm sorry, this looks like a lovely environment and a hella comfy couch, so what exactly does he have to be miserable about?

OK, Costco shopping is clearly a two-person job so all this tells me is that is one lazy, unhelpful dude.

Slouching toward the mall

I think those wide benches are meant for multiple people to be able to sit on them, like, on the sides and stuff, but you do you, guys.

This guy cannot even believe his situation right now. Either that or he needed a way to prop his head up while he fell asleep. It's hard to tell.

Honestly, we should put a leash on guys like this so when it's time to go, we don't have to wake them up. We can just tug until they get up.

This looks like a Renaissance painting. These men in such dramatic positions, waiting for their loved ones to just pay already.

Thank goodness this store has incredibly comfortable massage chairs because otherwise, this guy would be at a loss for where to lay his head.

If so, does he come with the couch?

You can tell that this guy was trying so hard not to fall asleep.

But he lost that battle with himself.

Ah yes, three generations of miserable men all gathered in one place. What a beautiful moment we all get to witness.

This guy came prepared with a huge laptop on which he could play solitaire! He knows what's up.

What a hard life. Share this with a miserable man you know!