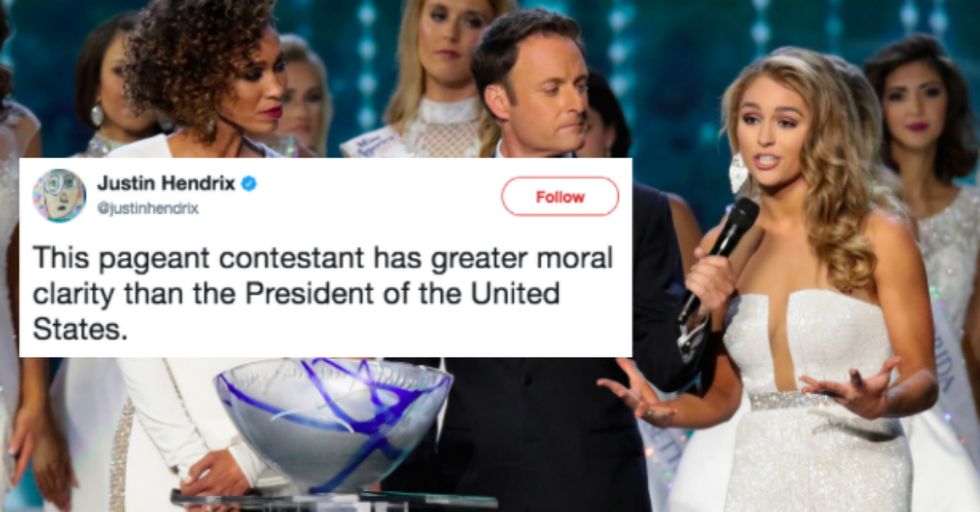 Before Donald Trump was President of the United States, he owned the Miss Universe pageant.

Now, his pageant days are coming back to haunt him.

Donald Trump has a long and storied past with beauty pageants.

The now president of our country owned the Miss Universe Organization for almost two decades, all the way up until 2015, when he was forced to sell it "after his incendiary comments about Mexicans drove away broadcasters NBC and Univision," according to Rolling Stone. I'll stress this again — this is the guy we elected as our nation's top leader.

It's probably good that he was ultimately forced to sell the organization.

After all, he was a giant perv when he was involved. There are countless stories of him surprising young girls in dressing rooms as they were changing and kissing women on the lips without their consent. Our President, folks.

And then there was Alicia Machado.

Machado won the Miss Universe pageant in 1996, and then Donald Trump proceeded to shame her repeatedly for gaining weight.

"This is somebody who likes to eat," Trump told reporters, that time he insisted on accompanying Machado to the gym.

He called her "Miss Piggy" and "Miss Eating Machine," and he never apologized for his uncalled-for harassment. In fact, he defended his actions when he told Fox News, "She gained a massive amount of weight, and it was a real problem."

Donald Trump has made a career out of being inappropriate beyond belief.

It was more than evident in his time with Miss Universe. And it's more than evident now, during his presidency. When white supremacists marched on Charlottesville in August 2017, inciting violence and killing Heather Heyer, Trump blamed "both sides." And when Miss Texas was asked a question about Donald Trump's handling of this attack in the Miss America pageant (a different pageant from Miss Universe — Trump never owned Miss America), she replied with more strength and dignity than Trump could respond himself, proving that these strong women have had enough of Trump's behavior, both in the dressing rooms and behind the podium. Wait 'til you hear what she said...

Margana Wood represented Texas in the Miss America Pageant, which aired on September 10.

The 22-year-old from Houston didn't win the competition (she was 4th runner-up), but she won everyone's hearts with her fierce response to a tough question about Trump.

The judge asked Miss Texas about Trump's response to the incidents in Charlottesville.

He asked, "Last month, a demonstration of neo-Nazis, white supremacists, and the KKK in Charlottesville, Virginia turned violent and a counter-protester was killed. The president said there was shared blame with 'very fine people on both sides'. Were there? Tell me yes or no and explain."

An insanely nuanced and hard question to answer in the 20 seconds she had, but Wood knocked it out of the park.

She said, "I think that the white supremacist issue, it was very obvious that it was a terrorist attack, and I think that President Donald Trump should have made a statement earlier addressing the fact, and in making sure all Americans feel safe in this country. That is the number one issue right now." Chills. This woman gets it.

Needless to say, people were impressed.

Twitter user @goldengateblond tweeted out the video, and it now has over 48,000 retweets and almost 135,000 likes.

But when you put it up against Trump's weak, wavering response to heinous behavior by white supremacists, the difference is stark. Margana Wood doesn't hold political office — she's competing in a pageant, and while that's quite an undertaking, we should be able to expect the person holding the highest office in the country to act with at least as much conviction as those trying to win Miss America. But Wood wasn't the only Miss America contestant this year who used her platform to voice criticism of Trump...

Cara Mund, the 23-year-old contestant from North Dakota who was crowned Miss America, also slammed Trump with her response.

On stage, Mund was asked about Trump's decision to withdraw from the Paris climate accord, which removes the impetus for the U.S. to report the contributions it makes toward eliminating global climate change. Mund clapped back: "It's a bad decision. There is evidence that climate change is existing and we need to be at that table."

It's not entirely clear when Miss America became such a showcase for political discussion.

But we're not complaining. More than ever, it's important to be an informed and active citizen. Politics are no longer something you can ignore, and it's encouraging to see young, smart role models like the women who compete in Miss America demonstrate that they care about their country.

This is the truth:

But, if we're being honest, that's not saying much. Donald Trump has proven time and time again to lack the "moral clarity" needed to effectively run this country. He should take a hint from Miss Texas and Miss North Dakota.