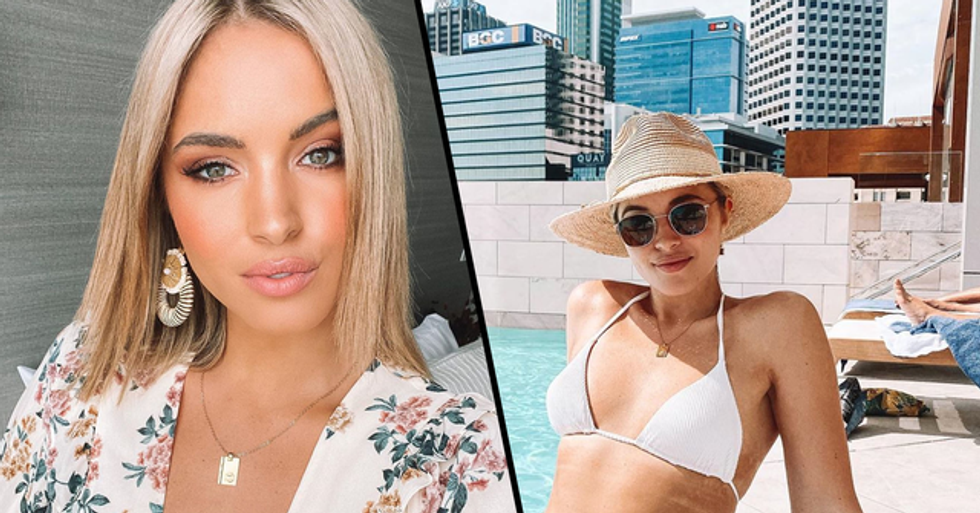 The former Miss Universe winner, Olivia Molly Rogers, has been cruelly mocked online this week after she shared an "embarrassing" bikini photo.

Olivia, who works as a mental health advocate, shared the horrific messages that she had received and bravely came back with her own message for the trolls. Keep scrolling to see the photo in question, and to hear her brilliant response...

Back in 2017, Olivia Molly Rogers won the title of Miss Universe.

Born in Adelaide, South Australia, Olivia put her dreams of becoming a speech and language pathologist on hold to pursue a career in modeling in the metropolitan city of Sydney.

However, it wasn't an easy journey for the aspiring model.

As most people in the industry will confirm, the world of modeling can be a grueling and dangerous place, and this brutal lifestyle made no exception for Olivia.

She has been open about her struggles with her body image...

And, shortly after her Miss Universe win, Olivia revealed that she had battled with an eating disorder for 6 years.

She had always struggled with her self-esteem...

But her health really took a hit after she moved to Sydney, where her weight dropped to 49kg. “For my height, 173cm, that’s just not okay and it was all to look good in a photo and for what ... I wasn’t happy," she said in an interview with news.com.au.

The model sank into a pit of depression...

And she now admits that her eating disorder had taken over her life. “It’s when you think about eating too much and you think ‘I need to exercise because I’m eating this’ which I think a lot of girls do ... I definitely had that. It was consuming me," she said.

Luckily, Olivia recognized that she wasn't in a healthy environment...

And she moved back to her home town of Adelaide, where she continued with her speech and language pathology studies. “I think I pulled back from the industry just in time and when I moved back to Adelaide and said ‘Oh my God, I am never modeling again’ ... I think I was lucky that I did that."

But it was back in Adelaide where she fell back in love with modeling.

And, this time, she was modeling to represent herself and other "regular" girls and women. “It was so not worth it and that is the message that I want to spread to young girls ... that you all look at these amazing girls on Instagram and aspire to be like that, but everybody’s different and everyone has a different body shape."

And it was this type of modeling that landed her the crown for the Miss Universe competitions in 2017.

While representing her country of Australia, Olivia was officially crowned as the Miss Universe for 2017.

She was keen to use her title appropriately...

And to represent the things she believes in. When asked what her title means to her, she responded: "It’s being a role model and using my voice for things that I am passionate about and hopefully helping young women in the process – and young men maybe – and also just having a good time."

Olivia has been working on breaking down the stigmas around depression and mental health.

As well as speech and language pathology...

Olivia's other passion in life is mental health advocacy, and she has worked alongside numerous mental health campaigns and charities, as well as using her platform to raise awareness.

Olivia has grown a large and dedicated following...

And has surpassed over 140K followers on Instagram alone.

However, with such a large online following...

There are always going to be the online trolls.

Olivia has found herself at the centre of an online storm...

And it's all over one bikini photo.

Here is the incriminating photo.

In the photograph, Olivia can be seen lounging by a poolside in a white bikini, alongside the caption: "Poolside in Perth with all the essentials. Sunscreen, hat, sunnies & rosé (ft. some blotchy fake tan)."

All I can see is a beautiful and healthy young woman relaxing by the pool... What's the crime? Well, not everyone was too happy with the photo and, disgustingly, went on to send Olivia direct messages pointing out her flaws.

"You're too fat to be on Instagram. You should take this down it's embarrassing."

The messages are completely shocking.

And Olivia shared her hurt and upset over the backlash, writing on her Instagram Story: "It is absolutely disgusting and disgraceful. Right now I don't even have the right words to describe how I feel."

But the model decided not to let the trolls win...

And, a couple of days following from the backlash, shared a video of her proudly walking on the beach in the white bikini, writing: "After a nasty little troll said some awful things about my body, literally hundreds of you messaged me with the kindest, most beautiful words. I am so grateful for every single one of you."

Olivia is the perfect role model.

As she decided to use the bullies to remind her followers of all the good in the world, not just the bad. "It was the best thing to be reminded that for one nasty human there are SO many amazing humans & I am so thankful that I have that kind of support. **** the haters!!!" We're living in a more body-positive world than ever before, and it's important to remember that women come in all different shapes and sizes. For some of the most influential models on Instagram who know how to keep it real, keep scrolling...