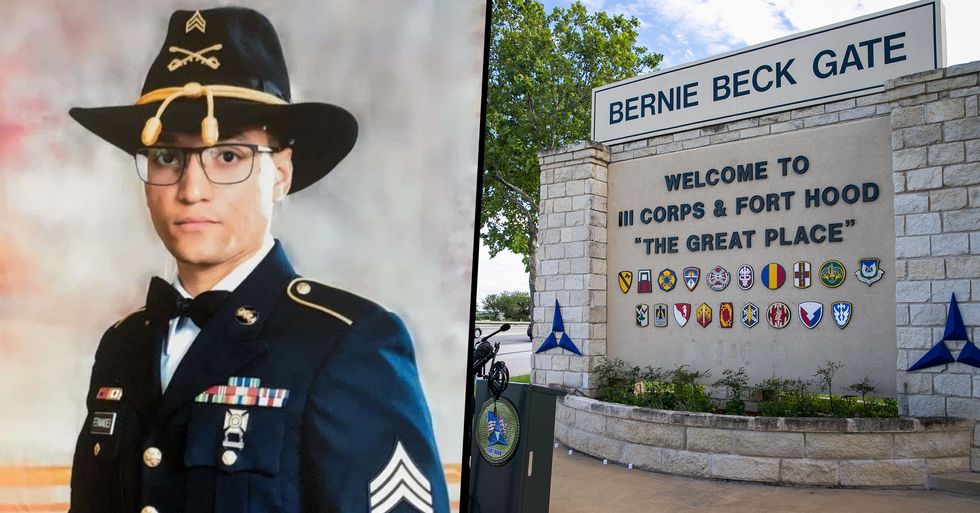 It's not hard to see why people think Fort Hood is cursed, yet another soldier has been found dead after going missing from the base, which has seen eleven deaths this year alone.

People are calling for the base to be shut down, and for a thorough investigation to take place...

Another soldier has been found dead at Fort Hood.

Twenty-three-year-old Sgt. Elder Fernandes went missing on Monday when his staff sergeant dropped him off at home, just four miles from the Texas base.

This comes after the same situation happening not too long ago.

It's believed Guillen had a history of being sexually harassed.

Her family believes her murder was linked to this, and to the #MeToo movement.

U.S. Army Specialist Aaron Robinson was charged with her murder.

But as police approached him for his arrest, Robinson died by suicide.

This means it's unlikely Guillen will ever receive justice.

There have been eleven deaths at the base this year alone.

Close to 2 dozen soldiers have been killed on or near the base since 2007.

And 5 of them happened since the start of this year, including Pvt. Mejhor Morta...

@forthood How many more soldiers have to be missing before you do an extensive investigation to find the serial kil… https://t.co/GEedIxtyhz
— Retired PS1(SW/AW) (@Retired PS1(SW/AW))1598012421.0

Whose body was found floating in a lake near the base on July 17. While his parents were adamant that he would never go swimming or hiking at night, the autopsy showed he had drowned.

The remains of Pfc. Gregory Morales was found in a field close to the base on June 19.

He was missing since August 2019, and his death is still being investigated.

Pfc. Brandon Rosecrans was found shot dead on May 18.

It's been reported that he was killed while bartering over the price of a gun.

And that's only this year!

In November 2009, Army psychiatrist Nidal Malik Hasan, opened fire killing thirteen soldiers and injuring thirty-two more before officers took him down. He was sentenced to death in 2013.

Sgt. Lawrence George Sprader's body was found in 2007, 4 days after he went missing from the base.

More than 3000 people volunteered to find him. And despite him calling for help on his cellphone, it still took them days to find him.

Pfc. Naser Jason Abdo was arrested In July 2011, after he admitted to him plotting to kill his fellow soldiers.

He got life in prison the following year.

Spc. Ivan Lopez opened fire on the base In April 2014.

And it's not just murder and accidental deaths the base is well-known for...

The sexual assault prevention officer, Sergeant Gregory McQueen, was fired after it came to light that he was trying to pimp out female soldiers in a prostitution ring.

And now another soldier has been found after going missing from the allegedly cursed base.

And it has come out that Sgt. Fernandes told superiors he was being sexually abused before he disappeared.

An army spokesperson said there is an "open investigation of abusive sexual contact."

"The unit sexual assault response coordinator has been working closely with Sgt. Fernandes, ensuring he was aware of all his reporting, care, and victim advocacy options."

It's crazy that this has been allowed to happen again.

"The unit also facilitated his transfer from a unit who has recently deployed to a different unit within the brigade to ensure he received the proper care and ensure there were no opportunities for reprisals."

And obviously he isn't the only one.

Vanessa Guillen also complained about sexual harassment before her murder.

The base was searched straight away.

He was last seen wearing black Army shorts a T-shirt, and red sneakers.

Fernandes' car hadn't been touched, all his belongings were still intact.

What makes the case even more suspicious, is he had recently signed a new lease but hadn't collected his keys.

"His mother just flew to Texas to try to find her son. We are very concerned about his well being."

"Our primary concern is for his health and well-being," military police said. "We have completed a search of the entire division area, to include motor pools, parking lots, and headquarters buildings and the unit is in contact with the soldier's family, the U.S. Army Criminal Investigation Division and civilian law enforcement agencies to help find him as we continue our search. Finding him and ensuring his safety is a top priority for the division."

Sadly, he has been found dead.

Local police determined it was his body after finding his backpack and driver's license.

A man was spotted near the railroad tracks which urged a resident to call the Police at 5:36 pm but after finding him, he was reported dead.

Although the autopsy is still pending.

"Our thoughts and prayers are with the Fernandes family during this challenging time," Police Chief Shawn Reynolds said.

His family was told late on Tuesday night.

The Army and the Fernandes family appealed for help when they couldn't get in contact with Fernandes.

Ailina Fernandes was unable to contact him for over a week.

Can y’all please help me find my cousin. He was stationed in Forthood, texas and has been missing for almost a week… https://t.co/dexVfOzvQO
— txukinha (@txukinha)1598299561.0

"His phone is completely off," she said. "I don't have any contact with him." Ailina said he "was just having some issue lately inside his unit."

"Our worst nightmare has happened, one of our own, Sergeant Elder Fernandes has been found dead today."

"We are sickened by this tragedy that has happened one too many times. We are heartbroken for Elder Fernandes's family." "We will not stop until we find out what happened to Elder." "We must demand a Congressional Investigation of Ft. Hood. We must protect our soldiers!"

We can only hope that justice is served...

Keep scrolling to see what Trump did for Vanessa Guillan's family after finding out about the tragic news...
20%