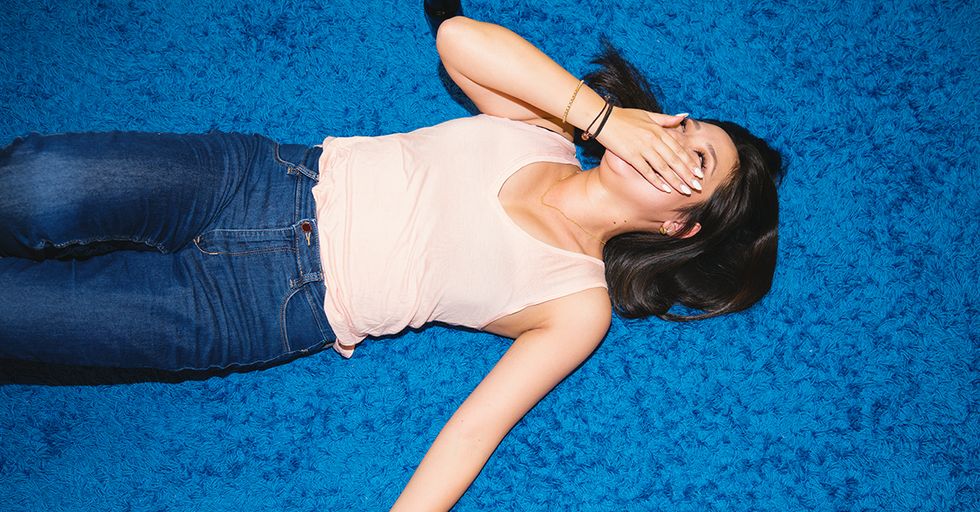 A lot of times, we make a mistake and don't realize it for a good, long while. Forgetting to study for a test is a mistake that doesn't make itself known until report cards come out. Guilt slowly eats away at you, day by day, when you cheat on your significant other. And skipping showers won't make you a social pariah for about three weeks. None of these mistakes cause instant regret.

But man oh man, do some mistakes ever make themselves known. Here, we've collected the best moments from Reddit's /r/instant_regret. These are the times when you mess up and immediately shake your head and go, "What was I thinking there, exactly?" Hopefully, you're not making too many kinds of these mistakes — I try to limit myself to one or two moments of colossal mess-up-ery a week — but if you are, consider slowing down, taking a deep breath, and asking yourself before you do anything, "Am I going to instantly regret this?"

Are you buckled in?

Man, amusement park rides are supposed to be fun. This girl on the right here was clearly suckered into this ride by her quote-unquote "friend" on the left, who is just having herself a great time.

Hockey player thinks his penalty is "crap," until he watches the replay. - bananamananagana

No coming back from this. This guy's got to move to another country.

Nothing says "oops, I just messed up" more than when you try to punch someone and they catch your fist mid-air and squeeze it in their hand while laughing at you. - BirdPlan

When you think you’re a Disney princess and try to feed the birds but end up getting bullied by a flock of cockatoos. - GallowBoob

An insurance scammer takes his shot.

Insurance scammers get told they're on camera. - FlashyWoodenTurd

When you think you’re in the kid’s pool only to be deceived. - Bloody-August

Get out of my video.

Oh man, this is about the funniest video I've ever seen. I love "I'll buy you food!" as an attempt to buy your way out of trouble. Remember that the next time you get pulled over.

Skateboarder vs. Old Man. Round One.

Old people believe every skateboarder is a menace, we all know that. But to take a wild swing at them? I'd say that's going too far (and the police agree).

Pride cometh before the fall.

I've been saying this for years — celebrating should be banned in all sports. Yes, this guy did a good soccer thing, but it's his job to do good soccer things. You celebrate, you get a crick in your neck. That's just God's way of telling you to cool it.

Listen, I'm not a monster. I don't want to laugh at a little boy shooting himself in the penis with a Nerf gun. But oh man it is very, very funny. Like, I can't help it. He does a funny little dance and everything.

The market for innovative ways to chug alcohol is always expanding, and this bro here thought he found a new answer. Unfortunately, his eyes, and power tools, were bigger than his stomach.

A lot of these Instant Regret posts have an element of "what did you think was going to happen?" to them, but none more so than this one. Homeboy is messing with a crocodile. They eat people all the time. It's kinda, like, their whole deal.

I'm not sure if this woman is under-age or if there's no alcohol allowed at this particular venue, but there is some serious regret on her face when she sees she just pounded a brew dog in front of an officer of the law. And boo on the cameraman for not giving her a warning!

No one's stopping you from eating the other hand's worth, my dude.

This poor pupper had a choice, and he chose wrong. You can see his shame when he looks into the camera like a disheartened Jim from The Office.

This poor little sweetheart wanted to just dip his lil' puppy paws into the pool, and he ended up getting his whole little puppy head wet! Don't be surprised if he never goes in a pool again.

In her defense, it is Sunday.

Man, a lot of moments of instant regret coming from chugging beers, huh? Maybe that's... not the best way to drink a beer?

I feel like you never see these kinds of high-flying bike tricks unless the rider is landing them. But someone has to fall sometimes, right? There is such a palpable moment of terror when his fingers slip away from the bike. Hope he's okay.

I want to believe this is an audition tape for America's Got Talent.

This guy pounds down a popsicle and then gets the most massive brain-freeze of all time. (The secret to curing brain-freeze is pressing your tongue against the roof of your mouth.)

Hope it was a good life, bud.

My dude gets into some sort of altercation with another guy on the subway and, thinking the doors are closing, leans in and spits on his face. But when the other guy muscles his way out of the train, he takes it to this guy, ending him completely and utterly. It's pretty satisfying.

Why was this guy opening the wine this way? Did he just have a blowtorch sitting around, gathering dust? Could he not find the corkscrew? At least the wine was okay.

That's what helping will get ya.

You remember when Billy Joel sang "Only the good die young"? He was specifically talking about people who help others lift giant cement pipes into holes in the ground.

Sometimes, the desire to rip fat cotton clouds is too strong, and you've just got to do it in class. But maybe make sure your backpack is airtight first?

Why is this happening?

Why are that man's arms that way? Why are they letting each other slap them? Is someone judging this? I have decided to believe this is how whatever country this is elects its presidents.

Did I do that?

Obviously it wasn't this guy's fault that the glass door completely shattered around him, but that doesn't mean he won't carry the shame he feels in this moment to his grave.

Should not have smelled it.

This cat's recoil after smelling this bottle of sauce is other-worldly. There is no doubt in my mind — this video shows a cat being possessed by the ghost of Stubbs the Sauce Man.

Now, who among us hasn't licked a blanket, only to find it adheres almost completely so strongly to our tongue? No, that's never happened to you? Cool, cool. Me neither.

When you mess with the sea, the sea messes back.

No joke, this video would've been sick as hell if it ended just a little bit earlier. As it is, this guy looks like a scaredy-cat, running away from water. Ever heard of swimming, my guy?

Why doesn't anyone open their booze like a normal person anymore?

Again, you can just buy a corkscrew. You've probably got one on the multi-tool your grandpa got you for Christmas a few years ago that you just tossed in the junk drawer. Open your bottles with that, for crying out loud.

Do not tap on the glass.

This lady is putting everyone at that aquarium in danger, as sharks hate it when you tap on the glass. She could have very well started a Deep Blue Sea sharks-rising-up-for-revenge-sort of situation here. Positively reckless.

The Pepsi tube is a shortcut to revenge.

Did this person forget that all cats' legs are spring-loaded and ready, at any moment, to attack? You should never blow into a Pepsi tube with your cat at the other end, lest you are looking to meet an untimely end.