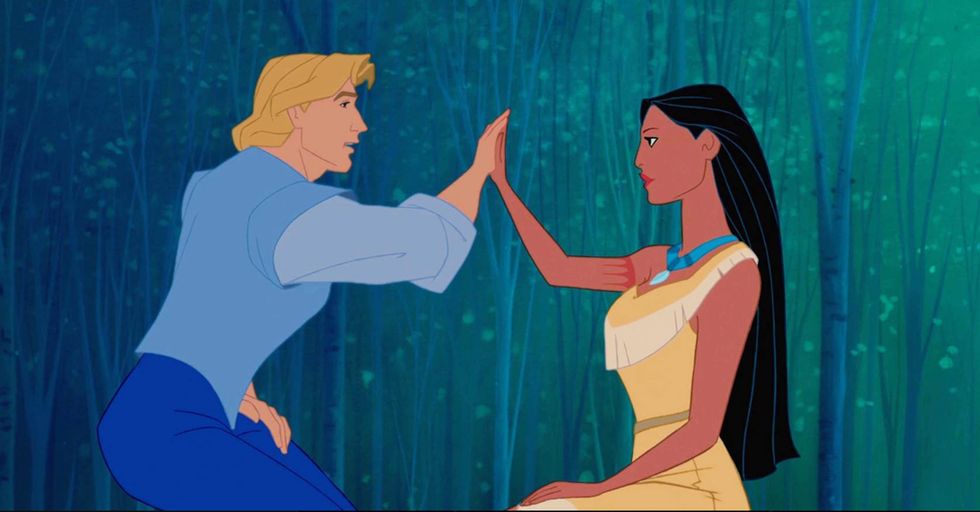 Ah, Disney movies, how we love them. They're effortlessly cheerful and full of adventure and romance. One thing they aren't, however, is accurate.

Disney movies are chock full of gaffes, blunders and outright mistakes. Here are 20 of the most egregious ones.

1. Many of The Lion King's animals don't actually exist in the savannah

The Lion King is primarily set in Kenya, and while many of the animals such as the elephants and lions are accurate, some, like giant anteaters and leafcutter ants aren't even found on the continent of Africa. They're actually native to the Americas. Good try though, Disney.

2. Pocahontas and John Smith were never together

When John Smith arrived in Virginia, Pocahontas (real name Matoaka) was around 11 at the time. Smith was 27. She was initially friends with him but lost contact when he moved back to England. The pair were never an item, although she did eventually marry another Englishman, John Rolfe. She died in England at the age of 21.

3. Snow White wouldn't have known how to clean the dwarves' house.

Snow White is a princess with a capital P, which means she would have had maids to clean and cook for her. She would, however, have known how to mend clothes though – embroidery was thought to be a ladylike pastime in the medieval ages.

4. The mosquito's drink in A Bug's Life

There's a scene in A Bug's Life where a male mosquito orders a tall glass of blood at the bar and proceeds to get wasted. This would be technically incorrect since only female mosquitos drink blood, as they need it to produce eggs. Male mosquitos subsist on flower nectar instead.

Anton Ego is the skeletal, black-clad specter of a food critic that terrifies chefs in Disney's Ratatouille. When he hears Gusteau's has had a comeback, he has this to say:

My last review condemned it to the tourist train. 'Gusteau has finally found his rightful place in history right alongside another equally famous chef: Monsieur Boyardee.'

There's only one problem with this, however. The real chef Boyardee, Ettore “Hector" Boiardi, was an extremely successful man. Not only was he the head chef of the famous Plaza Hotel, he had his own restaurant, and even catered the wedding reception of President Woodrow Wilson and his second wife, Edith. Ego's insult is actually a compliment.

6. How old is the Beast anyway?

One of the most mystifying conundrums in Beauty and the Beast is the Beast's age. Prince Adam is cursed to remain as a beast forever if he can't find someone to love him by the time he turns 21. Lumiere says they've been waiting ten years, which would mean Prince Adam was 11 when he was first cursed. Why then, does he look so old in his portrait...

Baymax, the marshmallow-like robot in Big Hero 6, is one of the most advanced medical technologies ever created. Unfortunately, he can't even do the simplest thing – diagnose hypertension. When protagonist Hiro has a stubbed toe, Baymax gives him a full body scan and misses Hiro's very high blood pressure, which, at 113/90 could be a sign of hypertension. Go figure.

There's a scene in Dumbo where the titular big-eared elephant snorts beer into his trunk. Problematic underage drinking aside, this is basically the pachyderm equivalent of snorting beer into your nose. Yes, elephants suck water up with their trunks, but they then deposit it into their mouths. Their bodies literally don't work the way 1940s Disney cartoons said it did.

9. King Louie literally could not exist in The Jungle Book

The Jungle Book is set in India, but orangutans are native to Sumatra and Borneo, so...yeah. On the other hand, Baloo the bear is actually a sloth bear, an actual species native to India.

10. Gaston wouldn't have been able to fire all those shots

Gaston fires three shots while singing praises to himself. Only problem is, the gun he's using is a blunderbuss. It can only fire one shot at a time, so he would have had to reload it to fire the other two shots, and yet he never did. That's one magical blunderbuss.

Namely, whales don't have uvulas. Yes, they're mammals, but only humans and certain types of baboons have that bit of flesh dangling in the back of their throat.

Hank the octopus has seven arms, and he's had them for a while since his "incident." Only problem is, octopi can regrow their arms, and they do so very quickly. He should've at least had a nub growing by the end of the movie...

13. Aurora and Philip could not have danced the waltz

The waltz was created in 16th century Germany. Sleeping Beauty is set in 14th century France. Unless there's a time traveling machine we're not aware of, this dance should not have been possible.

14. Hades is not the villain of Hercules

Anyone who ever watched the live action television series (or read the myths) knows that it's actually Hera, Zeus's wife. For that matter.

15. Hera is not Hercules's mother

Hercules's mother is actually Alcmene, a human woman Zeus tricked into having sex by taking on the form of her fiancé, Amphitryon. The moral of the story is, Zeus is the actual villain of Hercules, and pretty much most Greek myths since he cheated on his wife and sent her on a murderous rampage after his half-human son.

In Bambi, the titular deer's friend, Flower, tells him she's hibernating. The dilemma here is that skunks don't actually hibernate. While they lower their body temperature and block off their dens, they don't sleep the entire winter.

17. Where is The Emperor's New Groove set again?

In the film's opening song, Kuzco is said to be "an enigma and a mystery in Mesoamerican history." Except his kingdom is based off the Incan empire, which is further down than Mesoamerica.

Namely, there's a traffic light in that catnapping scene. And it has yellow lights. Problem is, stoplights only came into use in 1914, and yellow lights were invented in 1920.

19. That Wall-E scene has no sound

Remember that scene in Wall-E where the titular robot and his lady love Eva take a romantic space walk? It's filled with all sorts of delightful sounds – which is a problem since space is a vacuum, and therefore cannot transmit sound.

When Dusty competes in the Wings Around the Globe championship, he wins. But as an actual pilot told The Atlantic, "I regret to say that in the real world, the only way a crop duster could ever beat a field of race planes — no matter how well it flew — is if every other plane dropped out of the race." Keep dreaming, Dusty. Don't forget to share this article with your Disney loving friends!