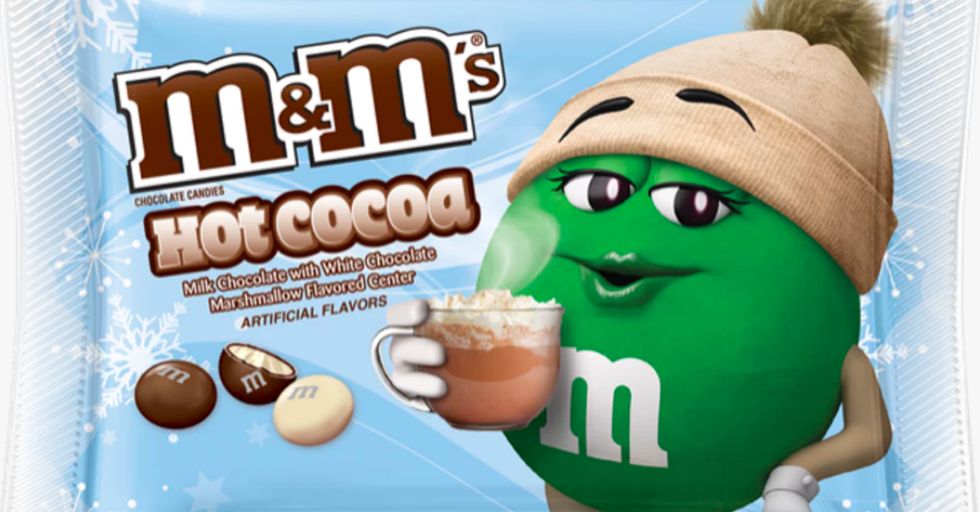 Here's the thing: M&M's are...delicious. And addicting. And it's impossible to just have a handful.

We've all been there. After a stressful day at work, you open the cupboard to see that bag of M&M's you bought last weekend on impulse. Your eyes shift from side to side, you see if anyone's looking...and you decide that yes, even though you're a grown adult, you're going to have M&M's for dinner.

THEY'RE AMAZING. NOBODY CAN DENY THAT.

The only thing better than regular old delicious M&M's are ones that are holiday themed. And as the days get shorter, the weather gets colder, and the jingle bells jangle in the distance as the holiday season fast approaches, we can all rejoice.

There is a new M&M flavor and it's going to blow your mind. Seriously.

These babies will be exclusive to target and they're dropping this month (November).

Target is already perfect, but now they'll have these M&M's? Do they seriously want all of our money?

So what's so special about this flavor?

There's a marshmallow center. Yes, you heard that correctly. A MARSHMALLOW CENTER.

And there's milk chocolate ring underneath the shell.

So you've got a marshmallow center and extra chocolate under the shell? In the words of iconic singer Brandy, "Have you ever loved somebody so much it makes you cry?"

Because that's me to these new M&M's.

Whoever thought of this flavor was truly genius. How many times have I sat there drinking my hot chocolate and wishing I could eat it as well? Problem solved.

How much does a bag of this pure heaven cost?

But did you think Target would stop there with the seasonal candy?

If you know Target at all, you know they always go above and beyond. Because they're Target and they're perfect.

Obviously Target isn't stopping with just M&M's when it comes to holiday flavors.

If you can believe it, there's more.

Target says that all of these new flavors will drop mid-November.

Which, ugh, can't they just be available now? It's fine. I can wait patiently for hot cocoa M&M's. It's totally fine.

Did you know that M&M's also came out with international flavors?

It's true! Because M&M's, like Target, are perfect, they came out with a 2019 line of international flavors. How amazing is that?

Which basically means that you never have to stop eating M&M's.

If you wanted, you could make your entire diet just trying a different M&M flavor every single day. Is this healthy or recommended by us? No. But still...you could do it.

So what are some of these international flavors?

They'll also have Hazelnut Spread M&M's, which has to taste just like Nutella, right?

So yeah, that's going to be pure heaven.

Forget what you know about the classic old M&M flavors. It's all about these fancy new ones.

Remember the days when we were excited over simple flavors, like mint and almond?

But M&M's aren't the only candy brand that's expanding.

That's right. For all you sugar addicts out there, here's some good news.

Hershey's is revealing their first new flavor in a decade!

And guess which flavor it is? Anyone?

Do you think M&M's will be upset? These Hershey kisses will also have a marshmallow center.

This is delightful news. It's impossible to get enough of hot chocolate.

Even though hot cocoa flavored candy sounds amazing, not all new ideas for flavors turn out great.

Oreos are the champs when it comes to testing out new flavors.

But for every delicious Oreo, there's always one flavor that goes a little too far and is hard to get behind.

Why? Who asked for this? It's not bad, but it seems totally unnecessary.

Or how about the Watermelon Oreo?

Why? Who would do such a thing? Talk about a limited flavor that was better off...well, limited.

Then there's the Berry Burst Oreo.

Which, again, fine. But it's nothing to write home about.

Then there were the "Rainbow Shure, Bert!" Oreos.

The terrible pun alone is enough reason to never eat these things.

But at least they're trying, right?

And some of their weird limited flavors are pretty nifty.

It's obviously not as good as eating a Caramel Apple, but it was still a good idea.

There are some misses but plenty of hits, that's for sure.

At the end of the day, candy is candy.

And it's hard to not enjoy all of it.

So keep an eye out for those new M&M's dropping mid-November.

Since they're only in Target, you know you'll need to stock up once they drop. Share this with your friend with the biggest sweet tooth!