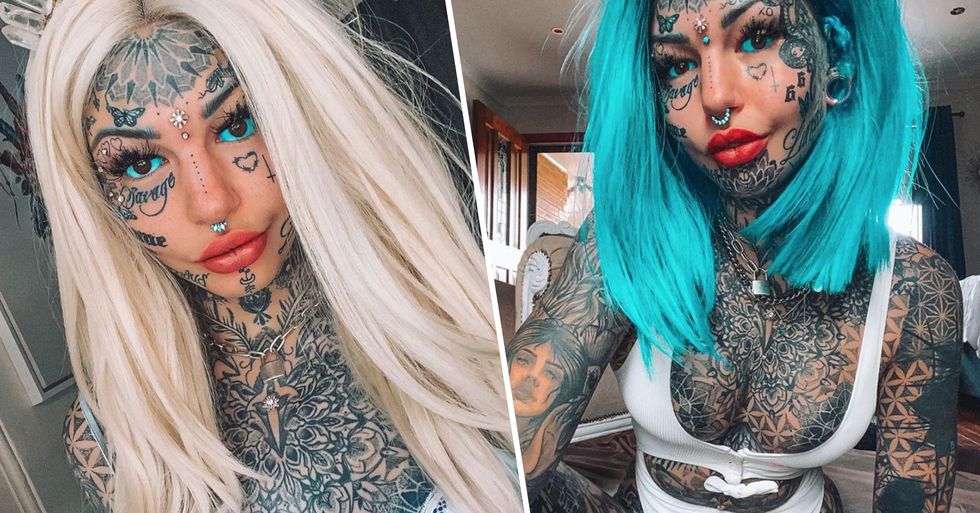 Tattoos are a beautiful form of art and many people ink their bodies to express themselves in a truly unique way.

But there are many risks that come with permanently marking our bodies, and some of these risks can be extreme. However, Amber Luke, an Instagram model knew the risks when she went into her journey and has still had every inch of her body covered.

But after she revealed what she used to look like before the huge transformation, she decided to crank things up a notch by covering the tattoos on her face to show us all what she would look like without them. The results were astounding...

Tattoos have become a means of expression.

A tattoo is totally unique to the individual...

And it goes without saying...

All tattoos come with their physical risks and if they aren't looked after properly, serious infections can be caused.

So one can only imagine the risks of tattooing every single part of your body.

Tattooing is only really done on the skin, but some people can take things to the extreme until they're basically unrecognizable.

Imagine taking things to this extreme...

This is Amber Luke, an Australian Instagram model who has had almost every inch of her body inked, costing her over $20,000.

She's even tattooed her eyeballs!

Even though it made her blind for approximately a month, it was worth it for her.

It's a difficult challenge, but a lot of people opt to put themselves through it.

This horrifying procedure was developed around 10 years ago and it involves a small amount of ink being injected under the conjunctiva (the clear membrane covering the front of the eye) and over the sclera (the whites of the eye).

If you look closely, the whites of her are blue...

For some, it must be strange to see, but Luke is proud of her appearance.

She is constantly changing up other parts of herself in order to suit her unique style.

The unique woman has captured the hearts of people all around the world.

Because of this, she has gained a very loyal fanbase.

With a very distinct appearance, Amber has managed to gain over 89,000 followers on her social media, who she regularly connects with.

And during a Q&A, she revealed some very personal pictures.

And no, not the ones you can pay for on her OnlyFans. The model asked her fans to send her in some questions to answer, which they happily obliged to.

One user was intrigued about the past...

They asked: "How did you look before you [got] tattooed" with a little smiley face and Amber truly gave us a shock when she posted a set of unrecognizable past photos...

Instead of sporting tattoos, she revealed herself to be a fresh-faced blonde...

It was not what we were expecting at all. Keep scrolling to see the pictures.

And a lot of her fans were left shocked at the revelation...

Some even commented this:

Describing her as "gorgeous, natural and pure."

It seemed to be a popular opinion...

Some of her fans preferred her old look.

While others commended her for her strength:

It's true that a lot of people would shy away from posting photos from their past but not Amber. We love that.

There's one thing money cannot buy and tattoos cannot cover up and that's a confident woman.

But now she's taken things to a whole new level...

After posting the photograph, she decided to give her fans more than what they had originally bargained for.

The Instagram model decided to cover up her face tattoos...

That's right, with almost every inch of her face covered in ink, it is hard to imagine her without her designs.

But how is that even possible?

Using a very thick layer of make-up across the designs, she even managed to give herself a shock when she looked in the mirror.

In an emotional post, she told us about her journey:

"Thank f*** I tattooed it - the only regret I have is not tattooing my face at an earlier age. Don’t let morons of society tell you what you should and shouldn’t do with your body and your life. YOU are in control. YOU are your own home. Live it and breathe it, baby."

She also revealed that she's still got a little way to go before she'll be completely satisfied...

"I’ve put in so much blood, tears, and dedication for my image. I still have a little bit of my journey to go! I can’t wait to share it all with y'all."

The post has since received over 6 thousand likes and hundreds of comments from her fans expressing their love for her. If you want to read more about amazing transformations, then keep scrolling...