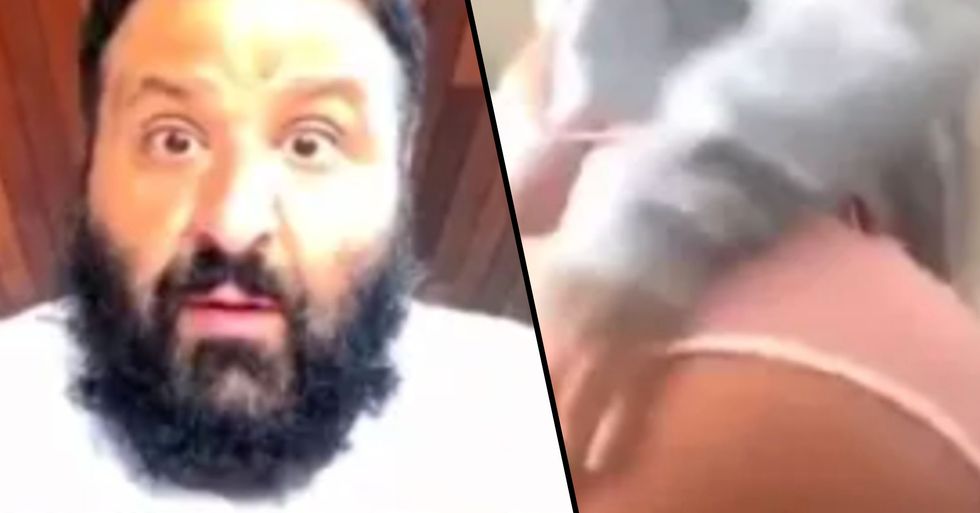 Quarantine life just isn't going right for DJ Khaled. First, he complained about not being able to have a haircut, and now he's gotten himself into some hot water after he collaborated with a model for an Instagram Live show. The problem was that she started twerking on camera even after he told her to stop.

But now she's spoken out about the whole incident after the video went viral.

Keep scrolling to see the full video, but I must warn you, ladies and gentlemen, it's not for the faint-hearted...

He was born in New Orleans, Louisiana, to Palestinian parents who emigrated to the United States...

And the DJ has described himself as a devout Muslim - something that he is very open and proud of.

He has had an interest in music from a very young age...

And with the encouragement of his family, Khaled went on to become acquainted with several young artists and helped them before their breakthrough; including Birdman, Lil Wayne, and Mavado.

And from then on, Khaled went on to rise in the ranks of the hip hop world.

The DJ went on to release many iconic tunes and he has collaborated with some very big names...

This includes "Go Hard" with Kanye West, "Fed Up" with Usher, "Take It To The Head" with Chris Brown, Nicki Minaj, Rick Ross, and Lil' Wayne, and "Wild Thoughts" with Rihanna.

Khaled shares a son with his wife, Nicole.

He gained a lot of attention after he decided to live-stream the birth of their now 3-and-a-half-year-old boy, Asahd, on Snapchat.

He seems to hold a very close relationship with his family...

But that isn't the only thing that the DJ is well known for.

He is never seen with a hair out of place and he clearly takes great pride in his appearance.

But in the current climate...

The majority of barbers and hairdressers around the world are now closed thanks to the global pandemic, so obviously, he's been complaining about that a lot because he loves one particular thing...

Well, all we can say is that he must have a very talented barber. But in his latest Instagram Live, he completely embraced the "caveman look."

Khaled is a huge media personality, so he was broadcasting to thousands of fans.

The DJ now boasts an impressive 19.6 million followers on Instagram, and fans love getting a glimpse into his personal life.

His most recent Instagram Live takes the cake for the most awkward collaboration ever.

What was supposed to be a family-friendly video took a strange turn after it was interrupted by a model known for her "raunchy" lifestyle.

The model has now been identified as Sofia James.

The video quickly went viral because of Khaled's hilarious reaction.

As I previously mentioned, he is really loyal to his wife...

So his immediate reaction when James started shaking her butt on camera was to cover his eyes and shout "no, no, none of that." His attempt to look away was pretty pathetic so people found it funny as hell and couldn't stop trolling him.

And we can't help but laugh at the entire situation.

But now Sofia James has spoken out, claiming it was all a misunderstanding.

She assumed DJ Khaled was taking a page out of Tory Lanez's more R-rated Instagram radio series which led to her twerking on camera while pouring water on herself... Big yikes.

Imagine her embarrassment when she saw his reaction.

And everyone else's for that matter too! Lots of other famous women have called her out on her behavior including Naomi Campbell.

Once she was met with backlash, she responded to the haters like this:

"I’m more than sure to bank his marriage is stronger than an IG Live video gone viral."

I don't think DJ Khaled is going to be on Instagram Live any time soon... Keep scrolling to see some more awkward Instagram interactions...