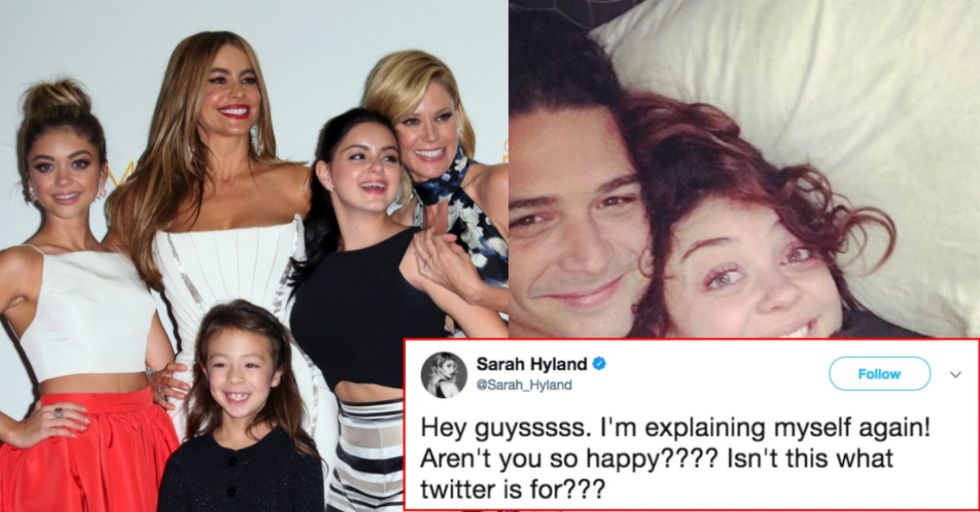 Do not mess with Sarah Hyland! The woman can stand up for herself. She was recently accused of using fillers and plastic surgery to alter her appearance when, in reality, she was struggling with severe medical issues.  When she was picked apart by internet trolls for appearing "too skinny," she had no issue sharing an emotional letter explaining why body shaming is so wrong.

She was forced to defend herself yet again yesterday when people sent her mean messages on Instagram about a photo she posted where she appears to be naked in bed with her boyfriend and his dog.

Sarah Hyland recently started dating Wells Adams, a radio DJ who was on the Bachelorette.

On his Bachelorette dating profile, Wells said he sees himself, "syndicated, married with a couple kids" in five years. According to People, the lovebirds first started flirting over Twitter in 2016.

The couple hasn't officially said they're dating, but they've been posting pictures together on their social media accounts.

It's pretty clear they adore each other. They went all out for their Stranger Things Halloween costume, with Wells dressed as Eleven and Sarah dressed as Will.

Look how cute they are!

Here's the photo that Instagram trolls badgered Sarah about.

She wrote, "Two more reasons to smile again. My big spoon and furry spoon." Sarah has been going through so much this year. Couldn't the internet just let her have a nice thing?!

After Sarah posted the photo to Instagram, she got direct messages asking her to keep her sexual life private.

Sarah posted the response to her Twitter account. The angry Instagram user took issue with the fact that it appears that Hyland is naked in the photo. Come on, people! Let the woman live her life. The expanded 280 character limit on Twitter was not long enough for Sarah's response...

She posted screenshots of notes on her phone, instead, to get her point across.

She wrote, "Every once in a while I'll go through my direct messages and see what you guys are saying and respond! Answer questions. Give advice. Or even just say hello. But I woke up too early to go to work this morning and saw this..."

She then posted a response to the angry Instagram user.

Hyland wrote, "She just brought to my attention that that picture I posted might have been inappropriate since we're in bed. So I just have to say I'm so sorry... FOR POSTING AN ADORABLE PICTURE BECAUSE CARL WAS ACTING THE NUGGETIEST SNUGGLEW [sic] BUG! Couldn't let that moment pass without getting a picture. The only things I share about my like [sic] with you all is through Instagram and Twitter. I do want my privacy. Especially in my relationships."

"I've made the mistake in the past on being way too open and talking too much about [my relationships]," she continued.

"This time is different. It's special. An I will share what I seem "appropriate" on social media because I still want you all to be updated. Because you guys are the greatest fans in the world. I even hate saying fans... because you're people. You're people who have had chronic illnesses, eating disorders, troubles, family situations that modern family helps you get through. People who share their stories with me and I love you all for that." She concluded, "This relationship's tea will only be spilled on social media...for now.... I LOVE YOU ALL!" But she wasn't done.

In her last post of the day, she brought up the fact that it looked like she was naked in the photo.

Sarah wrote, "I just realized I'm being criticized for being naked... which you don't even know if I am! You can barely see any skin but it's ok for Instagram models to roll around in the sand ACTUALLY naked? (I mean I'd post that too if I looked like that) My point is don't be hypocrites. Either be conservative on all fronts or FREE THE NIPPLE."

Sarah's fans loved the way that she took a stand against her haters.

Sarah concluded her well-meaning rant by saying, "Guys. I know I don't need to explain myself and I do ignore the "haters" (hate that word)... I think I really just LOVE a good clap? back?." We love a good Sarah Hyland clap back as well.