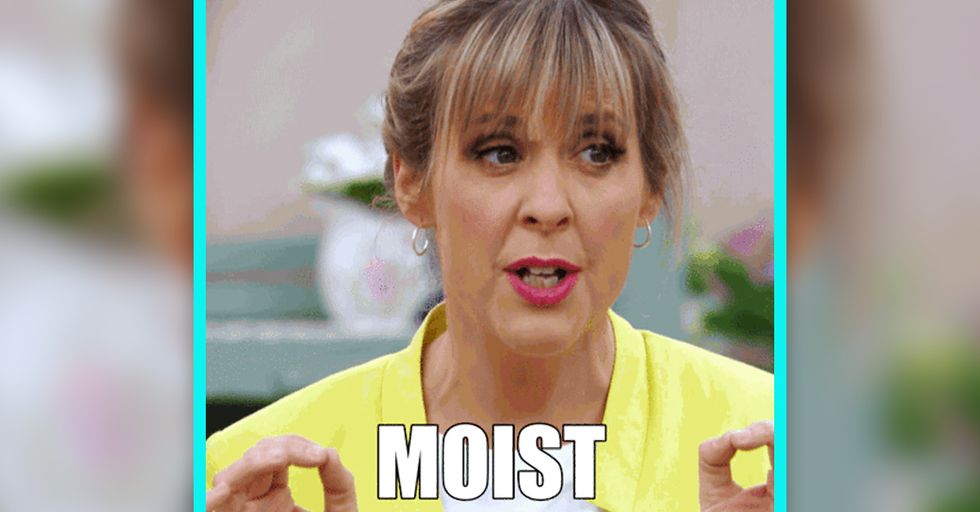 'Moist' and 18 Other Icky-Sounding Words That Everyone Despises

There are many words in the English language that are totally and completely gross for one reason or another.

For some, it's the sound that you're forced to make when you say it out loud.

For others, it's the image the word conjures in your mind.

But one thing's for sure, all these gross words have the power to make you gag.

Can you make it through this list of nasty words with your gag reflex uninitiated? You might want to keep a wastebasket by your side just in case. Without further ado, here are the 19 grossest words in the English language, and some truly awful GIFs to accompany them...

Good for cakes. Bad for anything else. Moist is the holy grail of gross words. But these next 18 are going to give it a run for its money.

I'm sorry for the GIF, but I'm also not sorry. With phlegm, it's both the word itself and what it means that really grosses people out.

OK, I love this GIF of Chunk from The Goonies, but unless you're talking about peanut butter, it's never acceptable to use the work chunky in conversation.

The onomatopoeic nature of this word makes it gross to say and gross to think about. "Gurgle, gurgle, gurgle." Ha, made you think it. The next one is truly iconic...

Even me, the queen of loving Dr. Pimple Popper videos, would rather not hear, use, or witness the thing that is a pustule. Ew.

Of course, fester doesn't just refer to Uncle Fester from The Addams Family, but if I didn't show him, I'd have to show you a picture of a large, gaping, probably pus-filled wound, and I don't want to do that to you.

The act of slurping isn't so bad compared to some other words on this list, but it's still no good to say because you can't really say the word without doing the thing. Try it. You see what I'm saying?

This is a Pitch Perfect vomit scene if you know what I'm saying. But really, one of my greatest fears in life is puking and I can't look at this or think about vomit for very long without getting nauseous. Moving along.

Don't let this cute bunny deceive you. The word for what he's doing is very icky. The next one is almost guaranteed to get you good...

While ooze is the perfect word for all things slime-related, slime is gross, and therefore so is ooze. No matter how much slime Nickelodeon sent our way in the '90s, it always stayed nasty.

Cheese curds are delicious, as is lemon curd, and as are other types of curd...as long as you don't think about the word curd and how you make curd.

This word is just infantilizing and gross and should make every modern, "woke" person's skin crawl off their body. Let's graduate from panties, OK folks?

It means sad or dismal, which means they so did not have to choose a word this weird and gross to say. Lugubrious. No thanks.

This GIF actually made me giggle out loud and I hope it does the same for you. We are all that little girl when we come face to face with that much mucus. The next one might take you a second, but then you'll understand...

I even happen to like pulp in my orange juice. But the word itself? No thanks times a million.

The word is just icky, nasty, and gross is so many ways, whether it's a kid smearing paint on the wall or a politician engaging in a smear campaign. Ew.

Good things are never gushing. It's not a gushing chocolate fountain. It's always a wound that's gushing blood. We should take back gushing. It could be a good word.

You know exactly why this word is on this list. Just say it out loud. There, you have your reason.

What a weird and unnecessary word for holes in things. Why would we do this to ourselves? There's still time to change it. Let's petition to remove orifice from the dictionary. Who's with me?