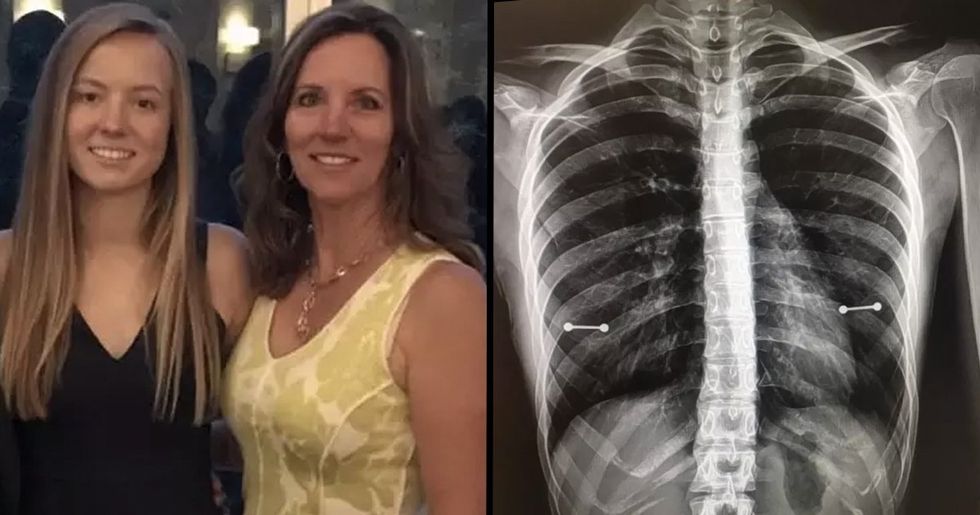 As children grow up, it's completely natural for them to have certain things about their lives that they keep secret from their parents. It has happened from generation to generation since the beginning of time. Most of the time, these secrets are pretty unexceptional and run-of-the-mill. Most parents don't need to know every single detail about their kids' lives.

Many kids go through a stage of rebellion and try things they know their parents wouldn't approve of — they may try drinking to excess, doing drugs, or other dangerous activities. Or they may decide to pull an all-nighter and skip breakfast in the morning.

And then there are people who decide to get secret piercings. It's all good until they accidentally reveal their piercings.

That's what happened to Sydney Allen, a 20-year-old woman from Florida. And the way her piercings were revealed is pretty funny.

Our story begins at a doctor's office.

20-year-old Sydney Allen of Clearwater, Florida went into her doctor's appointment and had no idea that she was about to become a viral sensation.

She was there for an X-ray.

Specifically, an X-ray of her spine. It was a routine checkup, nothing out of the ordinary.

In fact, she gets X-rays pretty frequently.

OK, you're with me so far, right? Now, let's go back in time a few months.

Obviously, your 20th birthday is the time to do something extra special. It's not every day you can say that you've lived for two entire decades! Some people decide to throw a party, while others may prefer a quiet night in with friends and family.

Sydney, on the other hand...

She celebrated her birthday by getting her nipples pierced.

Actually, the nipple piercings were a gift from her sister.

Her sister is pretty awesome. Sydney decided to keep her nipple piercings a complete secret from her parents. As she told Buzzfeed, her mom is "a bit conservative on appearances and hates tattoos and piercings." Uh oh. You see where this is going, right?

Anyway, back to the doctor's appointment.

Sydney was there with her mom. Sydney was getting an X-ray. Sydney had nipple piercings.

This was the result:

See those two small bright white objects that are glowing in Sydney's X-ray? Right around the nipple area?

Yep, her mom saw them too.

"My mom saw my piercings as soon as the X-ray popped up and the doctor and I started laughing hysterically," Sydney said. Sydney says her mom was visibly upset and eventually said, "We will discuss this later." Yikes.

Sydney was kind enough to answer:

Honestly, no matter how much nipple piercings hurt, I'm guessing it's nothing compared to the earful your mom will give you as soon as she finds out about them.

Some people also tried to give Sydney some brilliant excuses:

You could say you were trying to work out your chest muscles but realized you needed to start with a low weight limit!

There was also this solution:

Although I think this would probably be a little tricky to sell right in front of the doctor. Unless he was totally cool and covered for you.

As always, Twitter was on point with their responses.

I can practically feel the tension in that room between the three people, one X-ray image, and two teeny-tiny nipple barbells.

I can also clearly imagine Sydney's mom pulling this move:

Do you think she tried to convince herself she wasn't seeing that at first? That's what my mom would have done.

Sydney is not the only person who has experienced this awkward situation.

@Alexis__Valone @Sydney_allenn This is deadass how my mother found out my nipples were pierced when I went to the hospital
— erica (@erica)1540434379.0

The fact that this has happened more than once makes me feel like doctors and nurses look forward to this kind of thing whenever they have a pierced patient.

Does everyone who gets their nipples pierced eventually need a chest X-ray? I'm going to need some more research done on this.

Some people posted their own X-ray images!

Also, to be clear, while X-ray techs do typically ask you to remove any metal jewelry from your body before an X-ray, it's mostly to keep the jewelry from interfering with the image. You know, because they show up very clearly. A lesson which Sydney is never going to forget, I'd imagine.

That's right. There's another one.

I'm guessing a lot of people forget their nipple piercings exist when they get an X-ray. But they're reminded of them quickly!

This X-ray reveal is slightly different:

It's a web piercing (of the skin under the tongue). So yeah, piercings of all types show up on an X-ray.

Some people appreciated the heads up!

Which makes sense! If you're trying to keep your piercings a secret, this is very good knowledge to have.

Personally, I'm all for this. If you're an adult who wants a piercing, go for it! As long as the only person you're hurting is yourself, I think you should be able to do whatever the heck you want. And if you want to keep it a secret, that should also be your prerogative!

Also, a lot of people were throwing shade at the X-ray tech, which was my favorite part of this whole thread.

I didn't know anything about X-rays before today, but I have learned so much.

Honestly, I can't even believe how terrible the collimating is. And the lack of markers! Did a child perform this X-ray?!

In case you had no idea what collimating is:

That makes sense. Scroll back up and take another look at Sydney's X-ray. You can basically see her entire arm on the right side! That's unnecessary exposure.

Anyway, Sydney's mom was eventually *sort of* cool with the whole thing.

Despite being horrified by the piercings' existence at first, Sydney's mom came around to them.

"She ended up being pretty understanding since no one can tell unless I show them," Sydney said.

On the other hand, why keep them secret and safe when they can help you go totally viral on the Internet?!

"The picture does make her laugh now," Sydney said. It makes me laugh, too.

It could have been a lot worse! Know anyone with secret piercings? Share this with them to save them from future embarrassment!