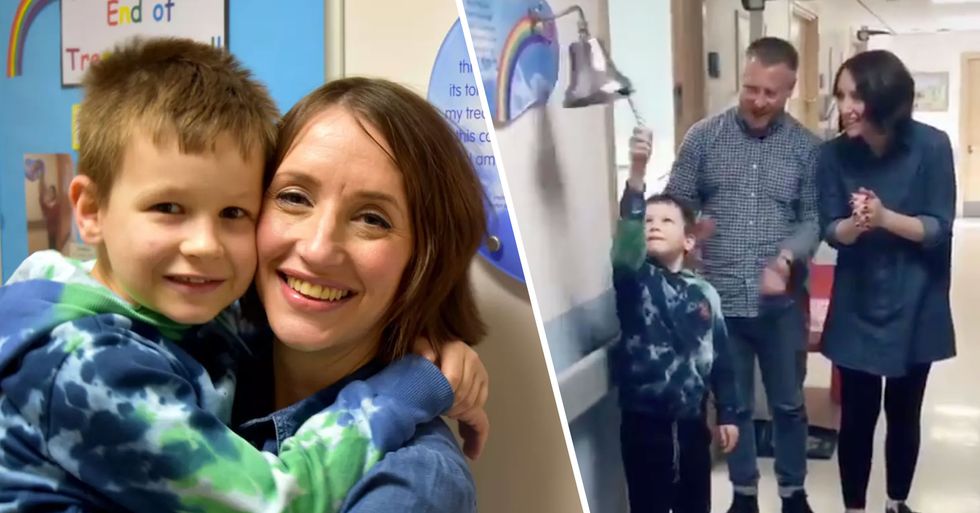 Cancer is a devastating and cruel disease that claims the lives of hundreds of thousands of Americans every year.

And, despite the millions of dollars that we have thrown into finding a cure for the deadly disease, we're still no closer ending cancer than we were all those years ago.

However, there are still some incredible success stories out there, and one of them is about the mom and her 8-year-old son both getting the all-clear from cancer.

And in the rest of the world...

More than 300,000 children are diagnosed with cancer globally.

The disease is having devastating consequences on families all over the world...

But there are a number of heartwarming success stories that will restore your faith in the seemingly endless battle against the disease.

Vici Rigby's story is certainly one of these...

As any mom would say in that situation, Vici said, "When I was diagnosed it was just shock and my first thought was about the boys."

Vici prepared for the worst...

"I just assumed the outcome would be bad, considering the seriousness of the diagnosis," she said.

But things were about to get a lot worse...

Just 4 months later, her son George, who was just 4-years-old at the time, was diagnosed with acute lymphoblastic leukemia.

This is utterly a parent's worst nightmare...

"When George was diagnosed, it's hard to put into words really, the rug was pulled from underneath us again but this time it was our four-year-old boy," Vici explained. "There's no way to really rationalize it in your mind. I guess on one hand we were just shell shocked again but on the other hand, we were so used to talking about and living through cancer that it almost felt like this is what we did."

The family now had double the amount of stress to deal with...

"I remember thinking we now had to hope for two miracles, for us both to get better," she said.

George underwent 3 and a half years of treatment at Worcestershire Royal Hospital...

"Quite early on, George's prognosis was very good so even though it was the most difficult period of time to get through, we always had a lot of hope and reassurance that he would recover," Vici said.

It was an exhausting time for the family...

Vici added, "When George was first taken into hospital to get his diagnosis I was still recovering from surgery myself." "But the team at Worcester were amazing, I honestly can't praise them enough."

The staff at the hospital were very understanding of Vici and George's situations...

"There were a few times when both I and George were in the hospital at the same time and they were all just brilliant," the mom explained.

But a few weeks ago, Vici and George were finally given the news they had been waiting 4 years for...

They were both officially declared as being in remission from their cancer.

It was a victorious moment for George to ring the ward's bell of recovery...

The work put in by the nurses and specialists is truly remarkable...

"It's a testament to the service and care we provide, and the fantastic relationship we all have with George and his family, that they have chosen to continue receiving his treatment here in Worcestershire considering they moved to Wales last summer," she went on to say.

We wish Vici, George, and their family a lifetime of happiness together.

Make sure to keep scrolling to learn about the brave 6-year-old who received a standing ovation by his classmates after beating cancer...