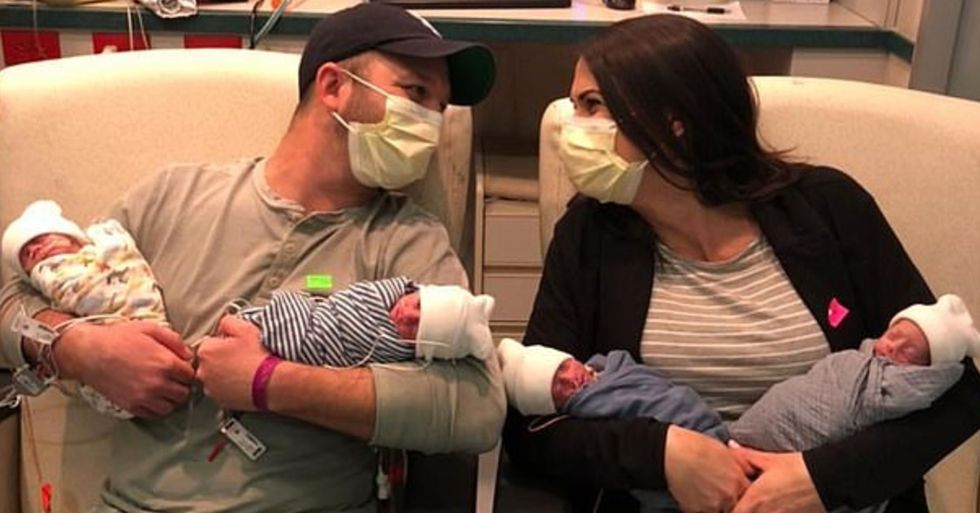 Childbirth an amazing thing. But to give birth to identical quadruplets, that's something else.

Keep scrolling to read more about this rarity...

We live in a world of weird and wonderful things.

Some more than others.

Most of it all thanks to mother nature.

It blesses us with some of the most wonderful things.

Including the births of thousands of babies every year.

After waiting nine months they finally get their own bundle of joy.

There are a few times when you having a baby that something unexpected might happen though...

Some women are lucky enough to have twins.

But despite being lucky, nothing could prepare you for the surprise of that.

What would be even more of a surprise than having twins though?

Or how about identical quadruplets?

Something so rare that has 1 in a 15 million chance of happening.

Well, that's what happened to one woman.

Jenny Marr and her husband Chris are now a family of six.

After Jenny gave birth to identical quadruplets on March 15th.

She went into labor at 28.5 weeks, meaning the boys were 5 weeks premature.

The time of her labor was also just as the current pandemic was getting worse and lockdowns were beginning to come into place.

All that and the odds of her safely giving birth to all four sons being at 1 in 15 million.

There's no surprise that the doctors dubbed it a 'miracle'.

We think it is, too!

Despite all the odds, the four health boys were born at Texas Health Presbyterian Hospital Dallas.

And they arrived just three minutes apart from one another.

The boys who were named Hudson, Harrison, Henry, and Hardy, are now back home.

After spending 10 weeks on the neonatal intensive care unit.

"They were all born in three minutes. It’s incredible."

Speaking to Today, Jenny also said: "We called them our baby birds because they really looked like baby birds."

At birth, the boys were all tiny and underweight with first-born Harrison weighing 2 pounds 6 ounces, while the next brother, Hardy, weighed at 2 pounds 10 ounces.

Henry weighed 2 pounds 6.7 ounces, while the youngest, Hudson, was the smallest of them all at 1 pound 15 ounces.

But Jenny was not, which medical experts claim only had a 1 in 11 million to 1 in 15 million chance of happening.

The parents were reportedly in complete shock when they were told and so were the doctors.

Speaking to Today, Murray, an OB-GYN at Texas Health Presbyterian Hospital Dallas said: "It’s unbelievable. It’ll never happen again in my career. I said, ‘Girl, go buy a few lottery tickets because those are the kind of odds we’re dealing with."

To make it even rarer and complicated, the babies shared one placenta which even they did not share well, could cause a risk of one baby taking the nutrients away from the other babies.

Fortunately, all four boys were able to share well and the birth went incredibly smoothly.

So, now just to juggle feeding and caring for their four sons. And that big issue of learning to tell them apart.

Well, if there's one thing that is sure, Jenny is going to have her handsful. To read about more rare births, keep scrolling...