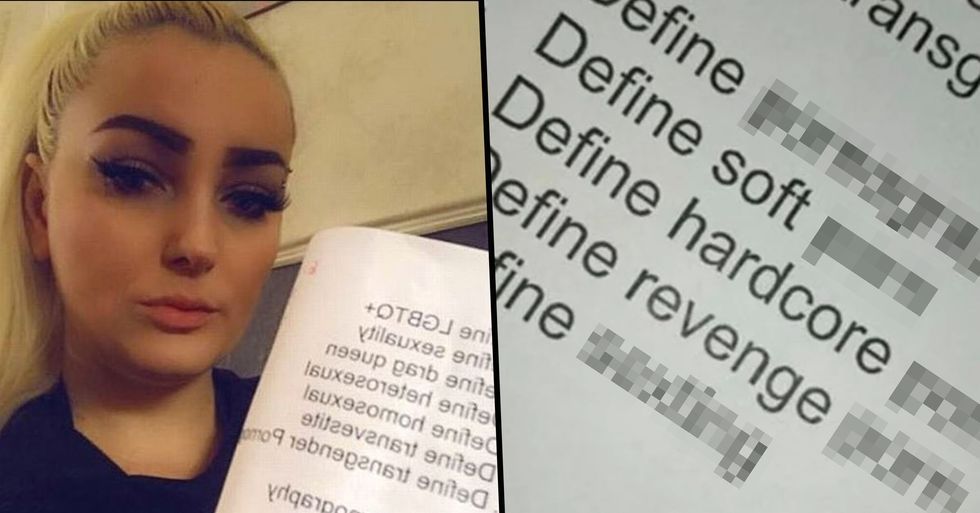 Mom Blasts School Over Disturbing Homework Questions Given to Her Child

Teaching kids isn't an easy task; there are guidelines based on what the people in power expects kids to learn at certain ages, but parents don't always agree.

And this can cause serious problems when they find out that their child is learning something they deem totally unsuitable.

One mom has blasted her daughter's school after they asked her to do something really inappropriate for her homework.

Especially if you're a teacher.

There's always the question of whether they're too young to learn a certain thing.

Or whether parents want them to learn it in the first place.

They might think that shielding kids from the outside world is going to protect them...

But it actually does more harm than good.

One question remains, however: the origin of debates everywhere...

@KirkMasseyTCU I agree that parents should have some discretion about the specific sex ed materials their children… https://t.co/3k9FTsHqYu
— Steve Westly (@Steve Westly)1579883273.0

How old should children be to taught sex education?

Schools always bear the brunt of it...

@kristinmary63 Sex Ed SHOULD start at home, the moment children ask about where babies come from. They need to lear… https://t.co/us0pLfOKaY
— Pooetryman (@Pooetryman)1565740925.0

And now one mom has blasted her daughter's school for their inappropriate teaching material.

Although experts believe that children should be learning these things at a much earlier age...

@IndiaMeToo I have a two pronged suggestion - parents must have conversations about empathy, respect and safe behav… https://t.co/HU26xEpPpg
— Meenakshi G (@Meenakshi G)1588640670.0

According to heysigmund, they should have learnt the very basics of sex education way before they reach late childhood (9-12 years)... Clearly not everyone agrees...

One mom is furious over her 11-year-old daughter's homework, in which she was asked to define super "inappropriate" topics...

Children between at Archbishop Sentamu Academy in Hull, UK, were set Health Education homework as part of their online lesson plan.

Teachers asked the eleven to fourteen-year-olds to 'define' adult topics in its full spectrum...

As well as a whole bunch of other super grown-up topics.

They were also asked questions about alcohol, drugs, and smoking.

After the uproar from parents, the school has apologized for any offense caused.

The mother, who wanted to be addressed by her last name, Mrs. Taylor, said...

If her daughter had searched the words, as the homework suggested, the results would have "destroyed her mind" and "scarred her for life."

Luckily, a Facebook post by another outraged parent prompted her to take the work away before her daughter began working on it.

The thirty-four-year-old said: "My daughter is still very much a child, we've still got magic elves, her bedroom is done in My Little Pony. She is very innocent and naive."

It does seem a little too far...

And many parents agree.

She was clearly distraught that the school was making her research such things...

@DailyMailUK @ezralevant If this is true, it’s disgusting schools are teaching this to 11 year olds.
— Richi.montana (@Richi.montana)1589921186.0

"I'm just thinking is there kids out there who have done this work? You would be scared at what you saw. At 11 I was playing with Barbies. If they have seen it they can't unsee it. Now it's making me think what they are learning about at school that we don't know about. We only know about this because they're home learning."

Mrs Taylor said she dreads to think what would have happened if her daughter had searched the terms online and seen the results.

She said: "I'm not one of these parents who will say I don't want you to do sex education as some is good for the kids, there are some things that they need to know, but not things that would destroy her mind. I got in touch with the school. I had a few choice words, I was fuming and I said point blank she is not doing it, she wants to be out the lesson. I am disgusted with it. How would they define that in school if they were not off? How would they have done that lesson when it's against the law?"

She couldn't understand why a religious school would do such a thing...

"They're a very religious school as well, so how can they say they are a religious school but condone writing something like this in the book? I can't get my head around it. I don't get the benefit from it, apart from scaring the kids. I know there will be other parents out there saying they need awareness but an 11-year-old should not know about it, they do not need to know about it. I think it's disgusting. Some parents have said it's good learning about it because it's readily available, but it's only readily available if you are not watching what they are doing."

Other parents and carers were equally "disgusted" by the topic.

Twenty-five-year-old, Leon Dagon, apparently saw the work when he was sorting out his thirteen-year-old sister's homework. He immediately took to Facebook to warn other parents.

He said: "When I first opened it I thought, 'Wow, this cannot be a 13-year-old's homework'. What kind of teacher would set that?"

He continued: "Luckily I found the work otherwise she would have typed this stuff into Google and you know what would have come up and that makes me feel sick. I felt sick thinking she was going to go onto the computer to search it up. I've taken the work out, this is not happening on my watch. I'm appalled. I get sex education is vital in anyone's life but when there's raw topics like this it's something else."

The academy has said students were not expected to search those terms online.

Academy principal Chay Bell said: "I am genuinely sorry if parents or students have unnecessarily researched any of these phrases and for any offence caused."

"I have asked that any future materials of this nature have a clear statement ensuring students and their parents are aware of any potentially sensitive content and will ensure all materials are fully age appropriate."

"The PSHE materials that we share with students are produced in line with government guidance, the PSHE Association Programmes of Study and the Sex Education Forum's definition of Sex Education. They also cover the Equality Act of 2010."

It seems as though it wasn't made clear enough to parents that the students didn't have to research these topics...

"Students were not directed to research these topics themselves on the internet because all the answers to the questions students posed were contained in the teacher-produced materials we shared. Again, I am genuinely sorry for any upset caused at this difficult time." Keep scrolling for the heartbreaking images of French children unable to play together after going back to school...