The couple have already decided and agreed on a name for their baby boy... | 22 Words 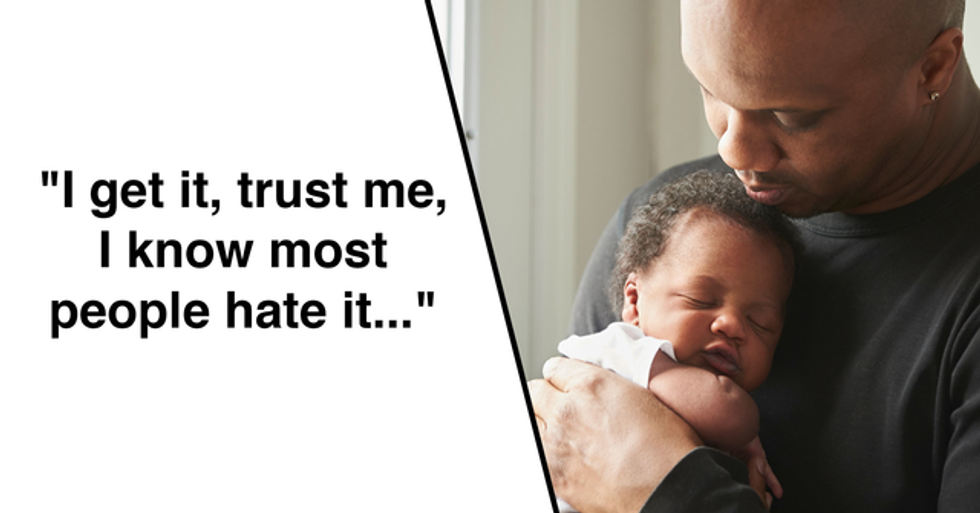 A devastated mom-to-be has claimed that her name choice for her unborn child has "torn apart" the family, with her in-laws even going as far as to brand it as "child abuse."

This baby name really is bad as the disgruntled in-laws are making it out to be...

Naming a baby is never going to be an easy task.

Giving a tiny human a name that they will identify by for the rest of their lives is always going to bring with it a little bit of pressure.

There are literally thousands of names to choose from...

And they all carry their own unique meanings and backgrounds.

It can be difficult to determine which name is suitable for an inanimate newborn...

And, to add to all this pressure...

You have to find a name that both you and your partner can agree on.

Luckily for most couples, they can eventually settle on a name that they both love.

But sometimes, expectant parents can find themselves quarreling into the early hours about the potential name of their child.

And, in some extreme cases...

All of the family get involved.

Many family members believe that they deserve to have a say in the name of a new arrival.

Sorry to break it to you, grandmas, but you need to keep your noses and your opinions firmly out of this one. But, sadly, some eager family members will never get the message and will push their name ideas and opinions until they get their own way.

And now, a woman experiencing the worst baby name dilemma has come forward with her story.

The pregnant woman, who has remained anonymous, has gone viral for her unbelievable story of a baby naming dispute between her, her husband, and her bratty in-laws.

The expectant mom, who is believed to be from the U.S. took to Reddit to share her dismay over the situation.

"My husband (23M) and I (24F) just found out we’re having a baby boy. He’s due in August, and this will be our first child and the first grandchild of my side of the family."

The couple have already decided and agreed on a name for their baby boy...

And it holds an incredibly important meaning for her side of the family. "In my family, our genealogy is extremely important. The firstborn son since the 1800s has been given this name. I’m well aware it’s a stigmatized name today, so that’s why I have agreed to use a short form." Sounds quite unproblematic so far, right?

But, the plot thickens.

Her husband's family apparently hates their name choice and, now that his family has turned against the name, so has he, despite him agreeing on it months earlier.

And it is apparently tearing the family apart.

She continued: "This is supposed to be a happy exciting time, and instead, it’s caused a huge fight that’s tearing our family apart. All over a damn name, a name, he [her husband] agreed on a year ago and he’s now going back on his word. I am crushed because this is so important to my entire family."

On her husband's reaction, she explained:

"I remember, he kind of chuckled and said sure, and that was the end of it. I thought it was settled. But now he's claiming that he never agreed and thought I was kidding. Why would he think that when he's met my father and grandpa? He won't even discuss it with me now, and has since told his parents of my name choice."

And his parents have had some very strong words on the matter.

"I now have his whole family hounding me and overreacting, telling me it would be abusive... My mother told me my MIL [mother-in-law] has called her to scream at her over the phone."

Her in-laws have even provided a list of names they approve of.

That's a bit rude, isn't it? "My in-laws are telling me that [the name] isn't an acceptable boy's name and that I need to "get with the times" and choose something more appropriate. They gave me a list of approved names like I'm a child, which is incredibly offensive to me."

"They have no right to name my own baby for me... What happened to respecting our elders and traditions? His family doesn't have any naming traditions, so it should fall to my family that does. How could I be expected to break a centuries-old family tradition?"

Now, I know what you're all thinking...

What is the name?! Well, here it is... And it is rather questionable, to say the least.

As the movie, Meet The Parents have already depicted, this mom wants to continue her family tradition by naming her baby boy Gaylord. But, like the movie also, this mother would give him a different name to go by in his day-to-day life, but still have Gaylord on the birth certificate. "The name is Gaylord. I get it, trust me, I know most people hate it. That is why I've been able to discuss with my parents and grandparents that he will go by Gail in daily life so that he doesn't have to deal with bullies."

But, of course, the in-laws hate Gail, too.

"My in-laws are telling me that even Gail isn't an acceptable boy's name, and that I need to "get with the times" and choose something more appropriate."

It is unknown as to whether the family ever settled their dispute, but the woman has promised to keep us all updated with the final decision. "I'll share a final update with you all when we finally decide on a baby name. Otherwise, this might be it. I'm sorry to anyone in the family who finds this, I just wanted to figure out a way for everyone to be happy." The post has had a mixed response, with some saying her husband’s parents are "sticking their noses where they don’t belong" while someone else said, "sometimes traditions need to be let go of." For more on unconventional baby names, keep scrolling...