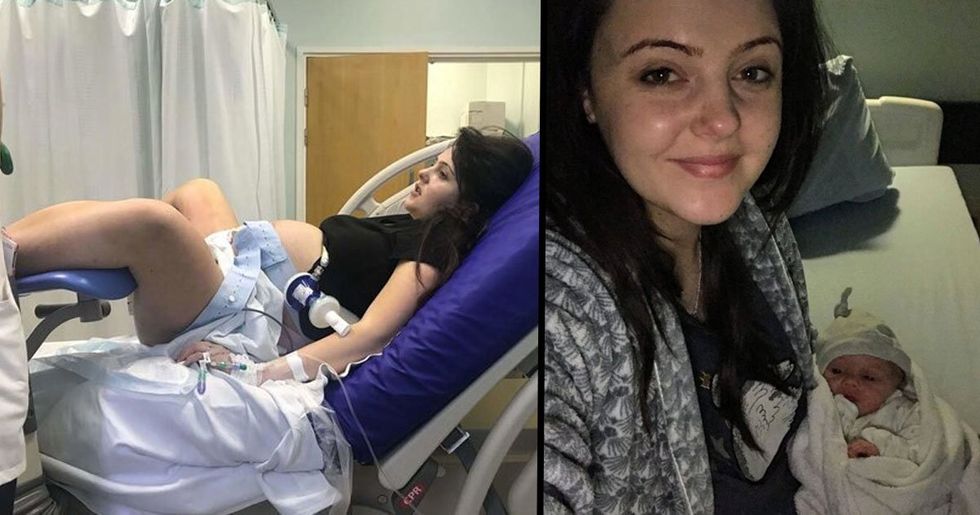 The miracle of life. It’s natural. It’s beautiful. It’s essential to the preservation of the human race.

But, sometimes, despite the endorphin rush of the recent parents, the jubilation of the extended family, and bright, blinking, innocent eyes of the world’s newest inhabitant - things can get messy.

Perhaps more people need to come to an understanding about birth and pregnancy - namely, that it’s a profoundly bodily phenomena, and, contrary to the what Disney’s stork armada might have you believe, the newborn often ends up covered in the worst kind of human waste.

In the case of Issy Fox, 28, all this reached fever pitch with the birth of her first-born, Freddie. Keep reading to hear more on the story.

A place of miracles wherein the lives of soon-to-be parents change forever.

What could possibly ruin the miracle of life? It’s our principle affirmation that life has meaning, and that, in some small way, a part of us might be preserved.

It happens a lot.

When you think about it...

It’s amazing how often the process occurs, considering that it’s almost certainly the most viscerally strenuous thing that the human body is capable of experiencing.

How does it feel?

Women who have not yet been through it (or indeed have chosen not to) and men often wonder how the process feels.

We’ve seen it on the screen.

Both on the silver of the cinema, and the homely comfort of the television.

“You have no idea how much this hurts…"

To this intense scene from A Quiet Place.

And there’s Knocked Up.

But, obviously, the reality of childbirth can be different.

It can still be romantic, but in its own, messy way.

For some, it represents something far greater.

Plath discusses the gender politics of the birthing process in The Bell Jar.

“Later Buddy told me the woman was on a drug that would make her forget she'd had any pain and that when she swore and groaned she really didn't know what she was doing because she was in a kind of twilight sleep. I thought it sounded just like the sort of drug a man would invent. Here was a woman in terrible pain, obviously feeling every bit of it or she wouldn't groan like that, and she would go straight home and start another baby, because the drug would make her forget how bad the pain had been, when all the time, in some secret part of her, that long, blind, doorless and windowless corridor of pain was waiting to open up and shut her in again."

Emma Thompson talked about how the pain of childbirth can be misread.

"The pain of giving birth is now 'optional' and yet there's no honesty about what that option can actually do to your body. It’s odd how frightened we’ve been made to feel about the pain of [childbirth]."

Beyonce argued that the pain was vicarious and that the miracle made it bearable.

"I felt like when I was having contractions, I envisioned my child pushing through a very heavy door. And I imagined this tiny infant doing all the work, so I couldn’t think about my own pain. […] We were talking. I know it sounds crazy, but I felt a communication."

It can be a lengthy process.

The record for longest ever recorded labor belongs to a Mrs Krzysztonek, who remain in labor, upside down, for seventy-five days.

But it can be quick.

One Australian mother, Mary Gorgens, managed to complete the process in just two minutes on a trip to the toilet.

But most of all, it can be messy.

With so much pressure bearing down on the bowels, there can be some bodily side-products.

Which brings us to Issy.

Issy Fox, 28, went into labor just shy of a year ago and wrote about the process.

It was an easy pregnancy - for the most part.

"Issy and partner, Luke, conceived via fertility treatment and she had an easy pregnancy, with no complications."

Most couples, or single parents, opt for a birthing plan. Though Ms Fox did not.

Ten days past the due date, it must have been a relief when contractions became substantial.

After arriving at the hospital...

Pretty much as soon as the water broke, so did the feces.

It was after she was asked to provide a urine sample.

Not quite what they had in mind, but no doubt an anomaly for the staff.

Here she was, ready to burst.

Freddie was finally due.

But the bowel movements only got worse.

By 7pm, the contractions were really making it difficult to hold everything in.

The midwives were discreet.

Issy says, "I was pooing with every contraction and the midwives were very subtly swiping it away."

Though her partner suffered a less than attractive view...

"Unfortunately, my a*** was facing Luke most of the time so he also had the pleasure of watching a log fall out every minute or so."

With your significant other pushing a live human being out of herself, it’s the least you can do to put up with her bodily indiscretions.

Finally, Freddie came into the world, bringing with him an explosion of “poo, womb stuff and blood."

There was no end to the carnage.

Tarring the walls, doctors, nurses, and flooring with the triumphant fecal matter.

Poor little things, born into a mire of excrement.

But isn’t that just what life is, and continues to be? - a river of sh*t.

Here’s a fitting song to play us out.