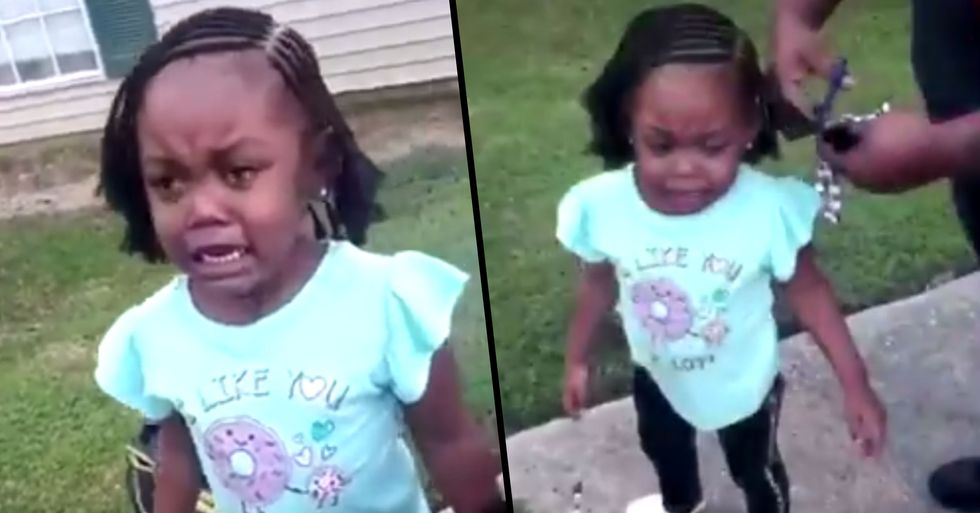 As all parents can relate, co-parenting your child with another person can be testing.

And things can be especially testing when the mom and dad can never see eye-to-eye.

But one mom has taken things way too far recently after she found out the father of her daughter braided her hair without permission.

If there's one thing we know about co-parenting...

It's all about communication.

And parents who constantly argue and fight over the smallest things certainly aren't those.

Parents need to put aside their differences...

And put their kids first.

But 2 parents from Alabama have gone viral for all of the wrong reasons...

The 2 parents - who are separated -  are assumed to have 4 children together, and a video has gone viral of the mom recently for all of the wrong reasons.

It shows the little girl, who has a head full of fresh braids and beads, standing by her mom looking visibly upset.

It turns out that the little girl's dad had taken her to get her hair braided...

And it also turns out that the mom is a professional hairdresser who braids women's hair for a living.

The mom wasn't happy about this...

She wasn't happy that the dad took her daughter to get her hair braided by someone else, so she did the only thing she felt was acceptable - she grabbed a pair of scissors and began roughly chopping down the braids on her distraught daughter.

The mom's behavior is extremely territorial and abusive...

And she can be heard in the clip saying, “I don’t care! I told you stop playin’ with me! I don’t care, I do my own daughter hair."

The poor little girl is traumatized...

According to Madame Noire, the dad wrote on Facebook this week, "I snuck up on my kids at daycare cause dey momma Jayla dnt let me see dem an I took my boys to get dey hair cut an got my bby girl hair did look wat her momma do just cause i got my bby hair did... I'm gucci but my bby hurt but females talk about dead beats dis why sum ******** say f*** dat s*** an I remind u she also smashed her bday cake on her bday last year."

The parents are clearly in a custody battle...

And it's safe to say that this woman is not fit to be a mother if she feels this is an acceptable way to treat her children.

And parents all around the world are furious with the mom and her terrible behavior.

Roughly cutting out the braids was unnecessary...

And why the mom couldn't just simply untie them is completely beyond us.

But some people are defending the mom's actions...

Many have turned against the dad, slamming him for taking his daughter to someone else to braid her hair instead of the mom... out of spite.

Many believe the dad doesn't have the right to make decisions about his daughter's hair...

Which, we must say, is extremely problematic as when it comes to raising a child, parents must each have a say in what happens - whether that's about a hair cut or what clothes they wear.

The mom doesn't regret her actions, either...

According to The Daily Dot, she said on an Instagram live that although she liked the style, the braids were "too tight." "It was too tight. My baby hair, her skin meat was puffing up between the braids and everything. It was pretty, but it was too tight, and I don’t even braid her hair that tight."

The mom has no remorse whatsoever.

She went on to blame the whole thing on the father in an explosive Facebook post. "I don’t need no h** putting they hands in my daughter hair when I’m a braider myself & just now getting my guh hair to grow!!! This f*** ****** know I even said the Africans can’t get in her head cause they braid too mutha f***** tight & guh hair was tight as **** damn right I cut it out."

Quite frankly, this is a disgusting example of parenting.

The mom and dad need to start putting their children first rather than making catty comments towards one another - and they need to realize how this will emotionally affect their little girl.

Keep scrolling to learn about the parents who selfishly left behind their children in an airport after they fell sick during the coronavirus outbreak...