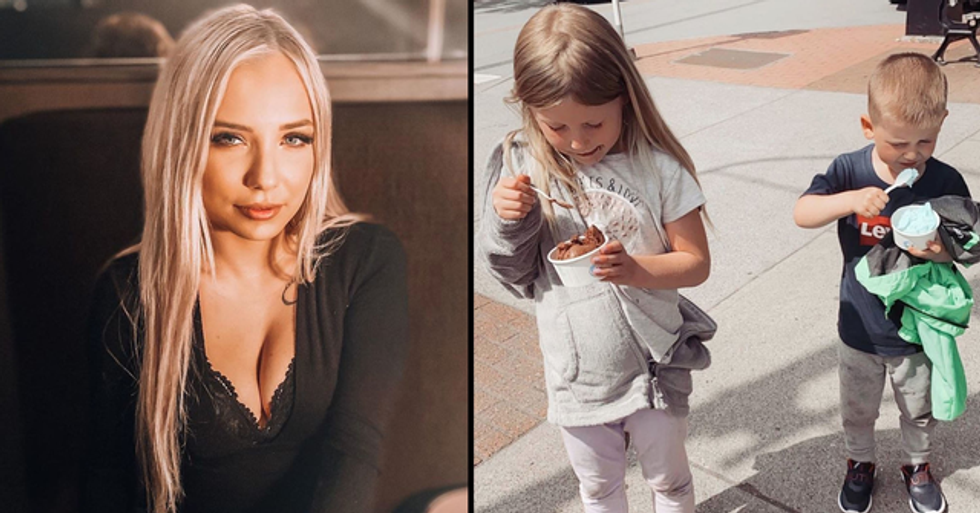 A mom has defended her controversial decision to dress her children in cheap clothes, while she still shops for herself at expensive clothing stores...

Caitlyn Fladager isn't shy of a bit of criticism.

Caitlyn, who is from Vancouver, Canada, is a writer and mental health advocate who dedicates her social media pages to "telling her truth about life and motherhood."

With her high-school-sweetheart, Caitlyn has 2 children...

And she regularly documents her rollercoaster journey as a stay-at-home mom.

But motherhood hasn't been easy for Caitlyn.

The twenty-six-year-old has been open about her struggles with mental health issues such as anxiety.

And this was one of the reasons why she gained viral attention earlier this year.

Caitlyn received an overwhelming amount of backlash when she admitted to smoking weed around her children.

"Marijuana has so many other benefits besides the ones you see in the movies. It has helped me immensely with being a more patient mother, it has helped me gain the weight I needed to, and it has helped my insomniac self, get some well-needed sleep at night."

She admitted to sometimes smoking while her children are still awake.

"When I smoke while my kids are up, which is rare, but it has happened, it is to calm myself. Not to get high, or to lay on the couch all day."

And, when Caitlyn wore this sweatshirt out, she experienced a lot of negativity from other moms.

On her experience, she wrote: "I had one cashier say to me 'do you think it’s safe to get high with your kids?' It took me by surprise. It made me wonder. Why every time someone thinks of weed, they must be getting high and not being able to function."

Straight away, Caitlyn pointed out the sheer hypocrisy of her haters.

Why is smoking a little bit of marijuana so different from having a glass of wine? She wrote: "It’s really interesting when I wear the wine mom tank top I do have out, I get high fives from other moms, I get laughs, I get told 'awesome shirt, relatable.' But when I wear this one, it’s a whole different story."

Caitlyn stressed that she is simply self-medicating with her marijuana use...

She insisted that her smoking actually had a positive effect on the time she and her children spent together.

"So, yeah, I’m a mom of two, and I have smoked while my kids are awake, and you know what? Those are the most relaxed, stress-free days my kids and I have."

"Sincerely, a pretty kick-ass mom who smokes a lot of weed."

But now, just months after her marijuana revelation...

Caitlyn has come under fire once again for her parenting techniques.

And this time, it's all regarding the way she dresses her kids.

In another lengthy Facebook post (she loves those, doesn't she?), Caitlyn discussed her reasoning as to why she buys all of her children's clothes at Walmart, while she shops in normal stores for herself.

"'Your kids only wear clothes from Walmart, while you get dressed up a lot. Not a good look for you as a mom...' That statement is something I get a lot."

She then admitted that, yes, she buys most of her kids' clothes from Walmart.

"Yes, my kid's clothes mostly come from Walmart, while I buy myself clothes from other stores."

However, Caitlyn then justified her decision...

And I don't think there will be a mom out there who can't relate to what she had to say. "You know why? Because I am not constantly outgrowing them like my kids are. I am not constantly spilling food and dirt all over my brand new clothes. I am not outside running around in the dirt for hours on end."

"I am not a kid. My children are messy, they love to play in the dirt, and they love to spill their food. I buy them cheaper clothes because I refuse to be the mom who yells at them for spilling a drop of ice cream on a brand new shirt."

She explained how she doesn't want to revolve her children's upbringings around being fearful of staining their clothes.

She shared a photo of her kids enjoying icecream and wrote:

"So here are my kids, in an outfit I bought not long before this day. Here’s them covered in dirt, spilling ice cream, and living their best life. That’s all I could ever want."

What do you think? Is Caitlyn right for not spending too much money on her children's clothes? Or should she be spending the same amount as she does on her own clothing? For more on the weird and wonderful world of parenting, keep scrolling to hear some of the best quarantine parenting hacks...