Mom Defends Smoking Weed in Front of Her Children | 22 Words 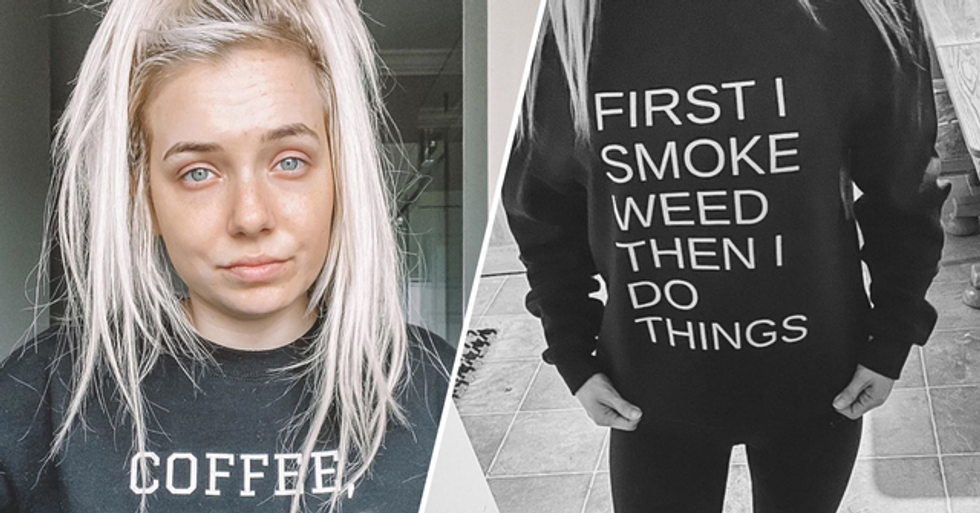 Mom Defends Smoking Weed in Front of Her Children

Opinions have been divided after a mom-of-two revealed that she occasionally smokes marijuana in front of her children.

And, while many were quick to slam her for her controversial decision, others agreed with some of the points she made in her powerful post.

Keep scrolling for the full story, and to hear what she had to say on her decision...

No matter what you do, there will always be someone to criticize your parenting techniques.

Whether you're a more authoritarian parent, an authoritative parent, or a permissive parent, there will always be someone who doesn't quite agree with how you're bringing up your child.

All moms will agree that they are simply trying their best, and the scrutiny of others certainly isn't helping.

And sometimes, moms feel like they just can't win.

If they let their children occasionally share a bed with them, they are labeled as over-protective and needy... But if they make their children sleep in their own beds every night? They are slammed for not being affectionate enough.

Every parent is different...

And, if the children are happy and healthy, who are we to criticize how they are brought up?

But there are some things that are criticized a little more than others.

Among all the parenting taboos out there, the debate as to whether it is acceptable to drink and smoke in front of children continues to rage on.

Now, plenty of parents enjoy the occasional tipple at home.

We've all been there... It's the end of a long and difficult day, the children have finally gone to sleep, and that bottle of wine in the fridge has been staring at you all day long.

And there is absolutely nothing wrong with winding down with a couple of drinks.

Just because someone has had children, it doesn't mean that they have to stop enjoying some of the finer things in life, does it?

But what about the use of marijuana?

Though marijuana has been legalized across several states here in America, the drug is still surrounded by a lot of controversies.

Though it is legal in many parts of the world, it is still classed as a drug.

Thus begging the question: Is it appropriate to smoke around your children?

Well, one mom thinks it is appropriate...

And she has come forward with an opinion-dividing explanation as to why she chooses to smoke the drug in front of her children.

Caitlyn Fladager is a full-time mom-of-two who just so happens to occasionally smoke pot.

Caitlyn, who is from Vancouver, Canada, where the drug is legal, is a writer and mental health advocate who dedicates her social media pages to "telling her truth about life and motherhood."

With her high-school-sweetheart, Caitlyn has 2 children...

And she regularly documents her rollercoaster journey as a stay-at-home mom.

But motherhood hasn't been easy for Caitlyn.

The twenty-six-year-old has been open about her struggles with mental health issues such as anxiety.

And, as a result of these issues, Caitlyn occasionally smokes marijuana.

In a Facebook post, she explained: "Marijuana has so many other benefits besides the ones you see in the movies. It has helped me immensely with being a more patient mother, it has helped me gain the weight I needed to, and it has helped my insomniac self, get some well-needed sleep at night."

And, sometimes, she has smoked while her children are still awake.

"When I smoke while my kids are up, which is rare, but it has happened, it is to calm myself. Not to get high, or to lay on the couch all day."

And, when Caitlyn wore this sweatshirt out, she received a fair bit of backlash.

On her experience, she wrote: "I had one cashier say to me 'do you think it’s safe to get high with your kids?' It took me by surprise. It made me wonder. Why every time someone thinks of weed, they must be getting high and not being able to function."

Straight away, Caitlyn pointed out the sheer hypocrisy of her haters.

Why is smoking a little bit of marijuana so different from having a glass of wine? She wrote: "It’s really interesting when I wear the wine mom tank top I do have out, I get high fives from other moms, I get laughs, I get told 'awesome shirt, relatable.' But when I wear this one, it’s a whole different story."

Caitlyn is self-medicating with her marijuana use...

She insists that her smoking actually has a positive effect on the time she and her children spend together.

"So, yeah, I’m a mom of two, and I have smoked while my kids are awake, and you know what? Those are the most relaxed, stress-free days my kids and I have."

"Sincerely, a pretty kick-ass mom who smokes a lot of weed."

You can read Caitlyn's full Facebook post here... What do you think on the points she made? No matter what she does to relax or help ease her anxiety, as long as her children are happy and healthy, we aren't ones to criticize. In more parenting news, Jimmy Fallon recently asked for the best quarantine parenting stories. Keep scrolling to read the best ones...