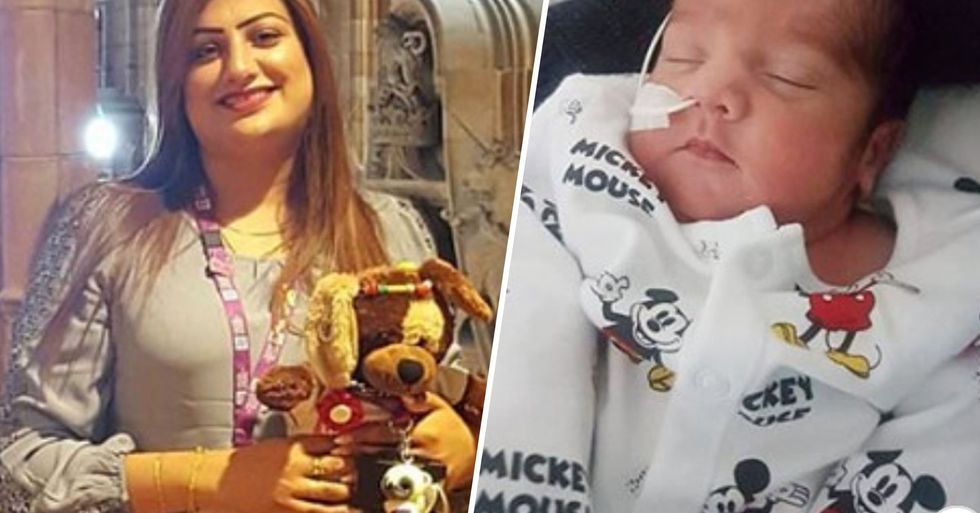 Having a baby is a daunting experience for any new mom, but to give birth at a time like this brings with it a whole new range of challenges, and while some moms are lucky enough to bring their children into the world virus-free, that isn't the case for a growing number of parents.

Many are giving birth alone, while far more are having to separate from their newborns straight after delivery, which is an extremely traumatic experience.

Sadly, despite the efforts to protect mom and child, this doesn't always have a happy ending.

And without a doubt, we have become the hardest hit.

President Trump's goal of having the nation "opened up and just raring to go by Easter" was a mere dream.

New York is the hotspot for virus cases here in the States...

According to the BBC, New York now has more cases than any single country outside the US.

It's especially worrying for those due to give birth anytime soon...

Any new mom and baby who are spending time in hospital are immediately at a higher risk...

Which is the last thing you want for a newborn.

There have been many cases of women giving birth at the peak of the pandemic.

And sadly this comes with risks for the mom and the baby.

But miraculously there have been cases where both pull through...

This is Angela Primachenko, a twenty-seven-year-old respiratory therapist and mom from Vancouver, Washington.

Not only did she test positive for the virus when she was thirty-three-weeks pregnant, doctors preformed a c section while she was in a medical coma!

Thankfully baby Ava tested negative for the virus, but even though Angela is now quickly on the mend, she is yet to hold her baby girl.

Carolyn Hrenko-Porras is another mom that shocked doctors, after giving birth to twins on April 2!

The babies were delivered 6 weeks early, right around the time the U.S. was seeing an increase in the virus.

Luckily both babies are doing well, but they still have some weeks to go in the hospital’s ICU.

What most don't realize is the heartbreaking fact that those babies aren't able to see their mom's face. “My babies only see me from the eyes up and at that age babies really want to study people’s faces and expressions and it's just sad my babies hardly get to look at my face," Hrenko-Porras said.

As heartbreaking as their start in life might be, these mothers will be able to watch their baby grow stronger by the day.

In America, there are many pregnant women who have contracted the virus, leaving them in a constant state of worry about what this will mean for the health of both them and the baby.

Sadly all too often this scenario takes a turn for the worst...

Twenty-nine-year-old Fozia Hanif is the latest woman to deal with the virus while being pregnant. Although she had been taken to a recovery ward after the birth of her son, she was quickly moved to an intensive care unit after her condition worsened.

Her baby son, Ayaan Hanif Ali, was born on April 2 at 31 weeks via cesarean.

Fozia wasn't allowed to see family during her time on the ward, and could only make a limited number of phone calls.

She tested positive for the infection when it was discovered she had a slight fever during a maternity check-up, which she had been attending regularly after losing her first child the previous year.

Fozia's husband, Wajid Ali, said: "They said we're going to keep her here to find out and we're going to do a test and they kept her for two days. The test came back positive and the next day they said it was mild and you can go home. After four days she had difficulty breathing and we called the ambulance."

Due to her condition, Fozia was unable to see her baby and only saw photos of him before passing away.

She died in the hospital without being able to properly see her son. Mr. Ali said: "She was really happy, she got the baby photo they [the nurses] printed out for her,' her husband of nearly seven years. She was holding the picture and saying 'look it's our baby' and 'we're going to come home soon'... that's the last time I spoke to her."

At one stage the family was told her condition was improving, which gave them hope that she would pull through, but sadly that wasn't the case.

"When we walked into the hospital when they said they were going to turn the machines off, I said no don't turn it off until we arrive, she's a fighter, she can pull through – but when we walked in there, we just kept praying."

The family was left "devastated" and is still grieving.

Her father Nabil is trying to stay positive for his family, saying: "But we've got each other, holding each other, supporting each other, siblings, grandkids." He continued: "She was a little superstar with us in our family. She was an inspiration to us all." Baby Ayaan Hanif Ali tested negative for coronavirus but remains in hospital. Tragically another family's world has been brought to a standstill after they found a heartbreaking letter husband left before dying...