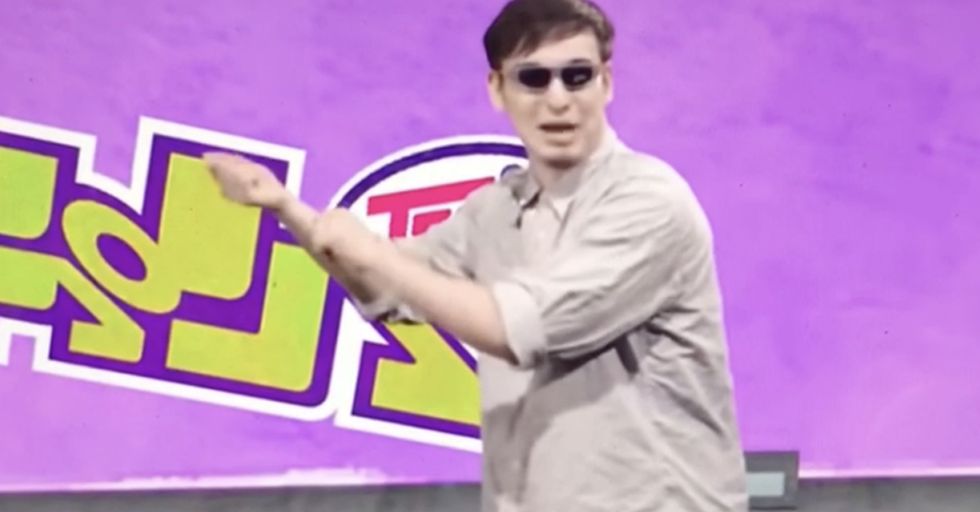 It's natural for parents to worry about the media their child consumes. Parental filters and kids' channels exist for a reason. But what if even that weren't enough to keep a child away from harmful content?

YouTube is notably harder to predict than a regular television channel or streaming service. Anybody can post a video, so it's harder to regulate. Now, YouTube has also developed an app called 'YouTube Kids," with curated content for the young ones. And yet, even that specialized app didn't stop one mother from finding an awful set of instructions in the middle of a kids' YouTube video.

Dr. Free Hess shared the disturbing discovery with her child safety blog. See what she found, and how to steer clear of similar videos in your own homes!

By-and-large, we're all aware of this. But what's really disturbing is the propensity for very bad stuff to slip through protective filters for children.

Dr. Free Hess, who is both a pediatrician and a mother, learned of suicide instructions embedded in the middle of a video aimed at children and quickly wrote about it online.

Warning: the video clip and language in it are very upsetting.

Another anonymous mother alerted Hess after finding the video. Here's her account of what happened: "Today I was actually grateful for my son’s nosebleed," the mother wrote. "We were sitting on the floor of the bathroom, watching YouTube Kids to distract him from the bleed, when I saw it. It was a simple, innocent cartoon – until it happened. Four minutes and forty-five seconds into the video, a man quickly walked onto the screen, held his arm out, and taught the children watching this video how to properly kill themselves."

This mother had trouble believing what she'd just seen.

"What did I just see? Did I really just see that? I immediately turned off the video. My son’s nose stopped bleeding, and I further investigated the video in private while he went to play," she continued. "I watched it again, certain that I had dreamt it up. I know YouTube had some sick videos, but I thought YouTube Kids was safe. They sure make it seem like it is."

Apparently, even the 'curated' videos on YouTube Kids weren't safe.

Again, the video's subject matter is obviously upsetting, but here's the mother's description of it. "Four minutes and forty-five seconds into the video.  The man quickly walked in, held his arm out, and tracing his forearm, said, 'Kids, remember, cut this way for attention, and this way for results,' and then quickly walked off," she wrote.

Needless to say, it was pretty shocking.

"Not much shocks me," the mother wrote. "I’m a physician, I work in the emergency department. I’ve seen a lot. But this did."

It's especially disturbing to consider the trap that was laid.

"This video was intentionally planted on YouTube Kids to harm our children. He waited until parents’ guards were down, thinking their kids were just watching a harmless cartoon when he made his entrance four minutes and forty-five seconds into this video," she added.

The worst part is, the video wasn't taken down immediately.

The mother referenced above reported the video and encouraged others to do the same. She also alerted Dr. Hess, and after quite a bit of effort, YouTube finally removed the video.

But there were others.

Dr. Hess was more recently alerted to yet another video of the same disturbing nature, this one on YouTube (as opposed to the YouTube Kids app).

This video had also been up for a while.

"In looking back at the comments it appears that people began reporting this video approximately 8 months ago, yet it is still able to be viewed," Hess wrote.

With many such videos apparently floating around the internet, we're left with a major problem.

Self-harm and suicide are becoming a rapidly more common problem for today's youth--and content like that video are undoubtedly making it worse.

A video that actively promoted suicide can be horribly damaging.

Suicide is the second leading cause of death in people between the ages of 10 and 34. The number of children engaging in some form of self-harm is also growing.

Hess shared some unpleasant statistics on her blog.

"In a nationwide survey of high school students in the US 16% of students stated they had seriously considered suicide, 13% admitted to creating a plan, and 8% admitted to attempting suicide at some point in the 12 months prior to the survey," Hess wrote.

Roughly how many kids is that?

"Every year 157,000 young people between the ages of 10 and 24 present to Emergency Departments for self-inflicted injuries and/or suicide attempts," Hess added.

In high schoolers alone, the numbers are rising gravely.

According to the Centers for Disease Control and Prevention, the number of high school-aged kids who have seriously considered suicide has risen 25% since 2009.

"Many experts believe that access to self-harm and suicide-promoting content is making the situation worse," Hess continued. "There have been several recent reports of teens committing suicide after viewing self-harm and suicide material online and on social media platforms."

This is an exceptionally hard thing for me to post. I've thought long and hard about this. I've decided it's way too important not to bring awareness to other parents. This is not up for criticism. I only want to let all parents know what to watch for... -Meridy Leeper

This mother found herself in a completely unexpected position.

After her daughter viewed videos like the ones mentioned above, Meridy had to deal with the aftermath. Kids youtube, Roblox, fortnight... no matter how much you think you are monitoring your child.. notifications to what your child is watching. It doesn't matter. My 7 year old child was taught how to attempt suicide by kids youtube and these games. -Meridy Leeper

Her daughter was able to speak about it, at least.

She has expressed that she doesn't feel neglected or unloved. Instead, she was constantly told to 'go kill yourself' by other gamers, by kids youtube. Shown HOW to. -Meridy Leeper

But the videos still took their toll.

Sunday night, she had a full blown anxiety attack. Which I held her and sang to her while she got through it. Monday, she drew this in school. -Meridy Leeper

This mother emphasized how unexpected the situation was.

This is a VERY real danger! I NEVER thought I would find myself helping my SEVEN-YEAR-OLD CHILD through an anxiety attack. PLEASE, keep your children away from these things. I'm just so glad my child was able to express her feelings before she actually tried to harm herself. -Meridy Leeper

And that surprise is one of the reasons she shared her story.

I never thought something as 'innocent' as kids youtube would have these subliminal messages. Again, I'm only sharing our experience in the hopes to prevent another child from going through this. -Meridy Leeper

So, what's the moral of the story?

Well, it's clear that parents should not consider the internet, or sites like YouTube, places to allow their kids free reign while using.

That's not to say kids CAN'T play games or use YouTube.

But keeping an eye on them is key. To that end, here are some recommended tips for keeping kids safe online.

She wants site administrators to be more responsive, too.

"We also need to fight to have the developers of social media platforms held responsible when they do not assure those age restrictions are followed and when they do not remove inappropriate and/or dangerous material when reported," Hess wrote.

YouTube is fun and useful, but not a babysitter.

Depending on your child's age and level of maturity, you might consider restricting the use of YouTube to a desktop computer kept in an open space (where it's easier to know what they're seeing).

There are monitoring services.

A service like Bark can do some of the monitoring for you if you're in need of a little tech support!

However rough, it could also help to have a talk.

Let's be honest: some time or another, your kids will stumble across something they shouldn't on YouTube. So make sure they know what to do when that happens.

Being prepared is better than nothing.

Hess was able to get that second video taken down from YouTube as well. But those are just examples of a larger problem, and they're certainly not the only harmful content out there. So if you've got kids who roam the internet, make sure you've got a plan in place for where they can go--and for whatever they might see. Ever see anything like this before? Share the story with other parents!