Mom Fails That Are Way Too Relatable | 22 Words 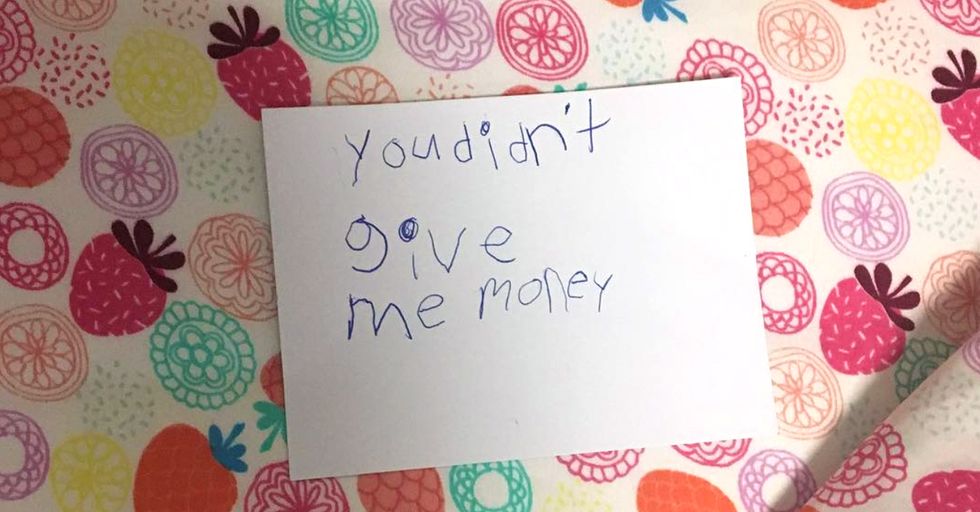 Mom Fails That Are Way Too Relatable

We all fail here sometimes.

In case you're wondering, this is what a baby looks like when you think you're putting moisturizing lotion on her head but it's really diaper rash cream. Happens to the best of us.
You know, it was just one of those days. One of those days when you don't pay attention and you accidentally make your kid a sandwich with super moldy bread.
I didn't know you had to keep the bathroom door closed for children! I thought that only applied to animals who want to drink out of the toilet.
You know you're having a rough day when this is the portrait of you that your own child draws. It's like a devil raisin.
This poor mom put her son's lost tooth in a baggy so they could put it under his pillow later, but then she accidentally packed his snacks for lunch in said bag. At least he didn't accidentally eat it!
It's hard to remember to check the pockets of your own pants before you do laundry. Let this be a lesson to parents everywhere: Kids put a lot of weird stuff in their pockets. Definitely check them before you do laundry.
This mom tried to make her kid's sandwich into a fun shape, but it just looks like mice came and nibbled on it all the way around. Better lunch next time, mom.
This poor woman forgot to blend her foundation for 45 minutes and only noticed when her kid kept looking at her confused and disgusted. Mondays, am I right?!
This little girl is crying because she wanted more than two shoes on her feet. This isn't so much a mom fail as it is a reality fail.
This is what happens to Easy Mac if you forget the water. Just in case you were wondering...
This caption reads, "I vaguely remember my husband saying, 'Don't let Rachel get the bag of Cheerios. The bag won't seal shut.'"
Guess the hot glue didn't quite work. But isn't it just a special type of fail that the only patch that hung on was the zero. Thanks a lot, universe.
These crazy tangled Christmas lights might seem like a wild west of horror to some people, but I LOVE untangling things. Invite me over. I'll be occupied for hours.
Someone forgot that the tooth fairy isn't actually real and you have to put money under your kid's pillow when they lose a tooth, otherwise you'll have a very pissed off kid.
This picture legit gives me agita. Mom decided to wash the teddy bear because it fell in a mud puddle but neglected to check for holes. If I were this kid, I would be furious for approximately 18 years.
Nothing like a good old attempt at a sword pancake that 100 percent ended up as a penis pancake. If you cut it up into bite-sized pieces, no one has to know.
Listen, this might be the creepiest breakfast in the history of man, but at least this mom is trying, right?! Nightmares for weeks, but at least she tried to show much she loves her kids.
Turns out, maybe this kid wasn't ready to sleep in her underwear instead of a pull-up. Now this mom has to spend her day cleaning the mattress with a nose plug and some seriously industrial materials.
On this family vacation, this mom forgot to make sure the Airbnb had a bathtub. This kid better stay small enough for the sink or learn to shower real soon.
This caption reads, "You know you're me when you can't figure out what goes with hot dogs and green beans is what you come up with. It's French fries, right?" No, green beans are not French fries.