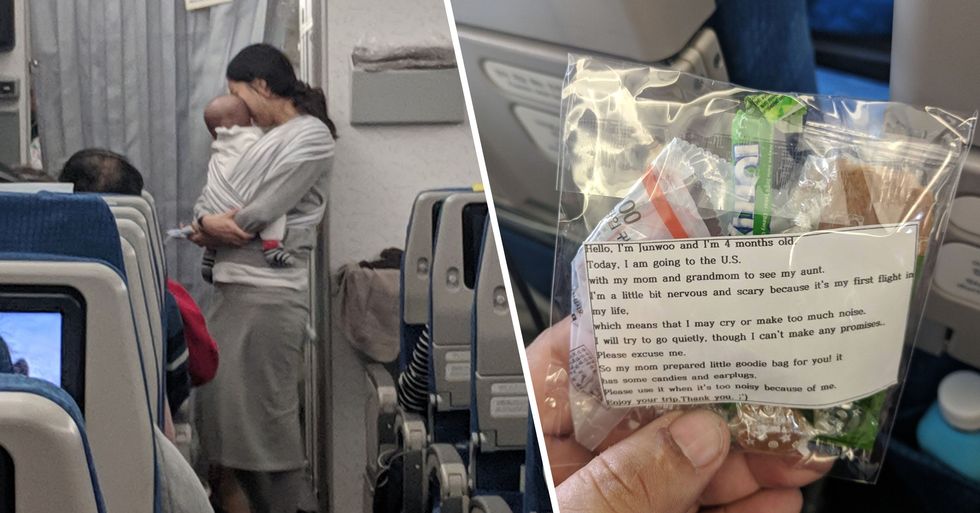 We all know that looking after a baby is going to be hard work, especially as a first-time parent. The crying, the feeding, the constant need for attention, and then more crying. It's going to be intense for anyone.

So there's no wonder that sometimes desperate times call for desperate measures!

After booking a flight with a 4-mont-old baby, one mom came up with the best parenting hack to make life easier, and keep the other passengers happy.

First time parenting is going to be hard for anyone to get used to.

The daunting feeling of being completely responsible for another tiny human.

Not to mention all the late nights and early mornings that begin.

The constant lack of sleep and the feeling of being exhausted.

And the late nights and lack of sleep, aren't in the fun way that they were a few years ago.

Back when your late nights and early mornings were when you came stumbling in from the nightclub at 4 am. Then you would sleep until 2 pm and spend the rest of the day complaining of how tired you are.

No, the feeling of becoming a parent is completely different from anything you've experienced before.

And actually it isn't all bad.

The overwhelming feeling of love does outweigh the lack of sleep.

The strong protectiveness you feel overpowers the constant crying.

Ultimately, parenting is the best gift in the world.

And all the struggles are worth it in the end.

There is one struggle a little more challenging than the rest...

Travelling on an airplane with a baby.

No one likes being sat next to a crying baby on a long haul flight, or any flight for that matter.

But sometimes it can't be helped.

Especially if it's an important flight. You can't just put your life on hold because you're a new parent.

One mom came up with the best idea.

She was looking for something to make the flight easier for the other passengers.

She decided to create goodie bags for her fellow passengers...

Two hundred of them!

Her baby Junwoo was only 4 months old.

She was worried about Junwoo crying for the whole ten-hour flight to America.

She was traveling with her mother.

They were on a flight from Seoul, South Korea, to San Francisco, in June last year, to see her sister.

The thoughtful mom has gone viral.

After Dave Corona, a passenger on the flight, posted pictures to Facebook. She provided the two hundred passengers with a set of earplugs, sweets, and a note explaining the situation. He admitted he didn't hear the tot play up once the whole flight. Keep scrolling to see the mixed responses...

Should she have to go to all that effort?

As thoughtful as it was for Junwoo's mom to provide care packages for other passengers, some people commented that she shouldn't have needed to.

One person commented on the photos, saying: "This is just sad. She doesn't need to do such a thing. We people should understand her."

Instead of that, she had another suggestion.

One mom had to speak her mind...

I think most moms would agree with that one!

People didn't seem to agree with one woman.

She likes the idea!

I think we can all agree with Alma on this one!

Mothers have enough on their plate, without having to cater for adults that can't show a little compassion. Whatever your thoughts, I think we can all agree it was a sweet thing to do.