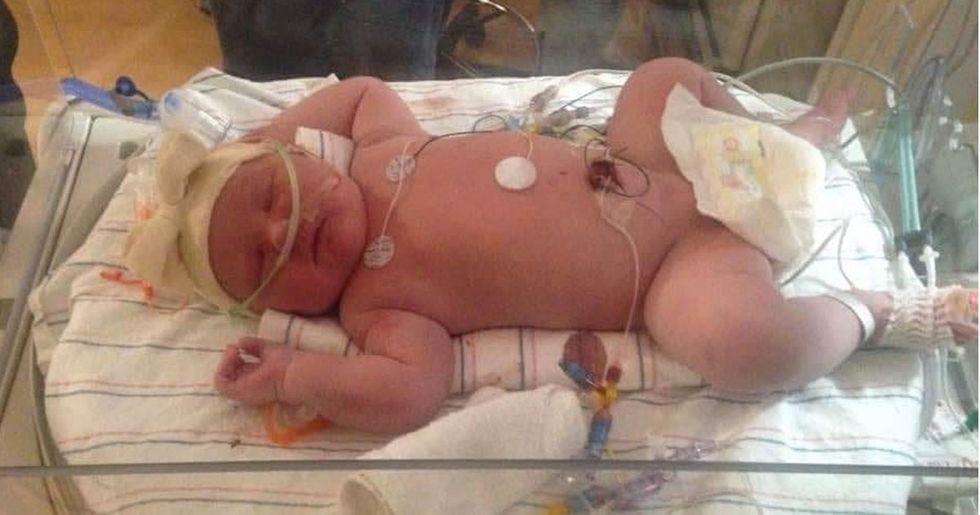 For all women, especially first-time moms-to-be, childbirth is an extremely daunting and down-right terrifying thought.

I don't know about anybody else, but the thought of going into labor and pushing out an entire human being is mind-numbingly scary. But this is something that we amazing women do every day and I can only imagine how "worth it" the pain becomes when you're introduced to your new-born baby.

But, for some women, the hardships of labor are a little more intense than others, and this strongly relies on the size of the baby making its way out of your body.

A new record has been set in New York City for the biggest baby to be born at an eye-watering weight of fifteen pounds. Read on to find out how this superhero of a mom managed to endure this Hell of a delivery...

Welcoming a child into the world must be an amazing experience.

The whole thing is truly magical. It's something that releases the inner warriors in us women after the nine months of pregnancy.

Turns out, there are some pretty big babies out there...

It's been recorded that some babies have been born weighing up to, or even over an entire stone in weight.

You can't put a price on the unconditional love of a baby...

Even when that baby weighs over a stone... My eyes are watering just thinking about it!

A woman living in New York has just set the new record...

Joy Buckley, who's from upstate New York, recently welcomed her third child, Harper, into the world on March 12th.

Joy has already had two children, so she's pretty experienced in the "parenting" department. Her first child was adopted after Joy and her husband, Norman, had struggled with infertility for years. They were raising their daughter when the unexpected happened; Joy found out she was pregnant.

She had a history of heavy babies.

Her first child was born in 2016 and weighed a hefty 11 pounds. This is considerably heavier than the average baby weight of 7.5 pounds. Anything between 5.5 - 10 pounds is considered pretty normal.

When Joy fell pregnant with Harper, she thought that she knew what to expect...

Joy was pretty certain to expect another big baby. But she certainly didn't expect Harper to be the biggest baby that the hospital - Arnot Ogden Medical Centre in Elmira, New York - had ever delivered.

She was brought into the world via a C-Section...

Baby Harper was welcomed into the world at 9.09am and weighed an unbelievable fifteen pounds.

Harper is thought to be the biggest baby that the hospital has ever delivered. Joy was indeed shocked when she learnt of her daughter's staggering weight after the intense birthing process.

"It felt as if I had been run down by two tractor trailers."

Speaking to The Huffington Post UK, Joy described her birthing experience: "It took two doctors and a vacuum to deliver her," she says. “She was wedged up under my rib cage. I could feel the pressure of them trying to get her out. I did end up getting sick to my stomach from the pulling and pushing they were doing to my body." “The next day I felt as if I had been run down by two tractor trailers," Joy added.

Despite this horrific sounding birth, Joy claims that she is "doing well," although she is, understandably, a "little sore." A "little sore" doesn't quite cover it, I imagine...

Joy took to Facebook to explain Harper's situation, stating: "Just because she weighed fifteen pounds doesn't mean her organs were developed with her gestational age." "This is why her o2 stats drop when she eats and why she requires oxygen."

Harper's time spent in the NICU helped to boost her recovery, and she was certainly kept in good hands. She is now at home with her family and is doing as well as any baby her age should be doing, despite being a little bigger than average...

The parents are in complete awe of their new baby daughter.

Speaking to The Post, Joy said: "We are so in awe of her, we’ve been able to hold her. She’s got a pretty happy demeanor."

Joy addressed the issues of infertility.

Joy wants other parents to keep trying, even if they are struggling with infertility. Speaking to WETM, she said: "Don't give up because it's right there. It's definitely right there because my kids are total proof of that."

Infertility is a heartbreaking reality for couples around the world.

In the US, twelve to thirteen couples out of one hundred have trouble conceiving. Whilst IVF, surrogacy, and adoption all are options available in the US, they just aren't suitable for everyone.

But the impossible may become possible!

Joy and Norman were initially told that they had a fifteen percent chance of conceiving. Now, they are living happily together with three children. We're so happy for this pair!

"It's something I've always wanted to do."