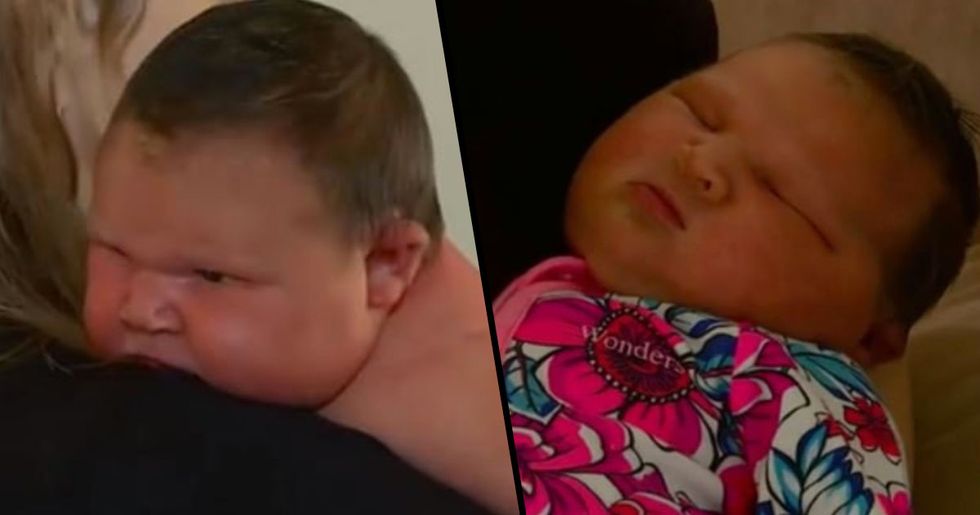 The idea of giving birth is scary enough, right?

Trying to squeeze another person out of your body may well be the most natural thing known to man, but it sure sounds pretty freaky. When I asked my mom how painful giving birth was, she said it was the worst pain she'd ever experienced, and she's a tough cookie. I would definitely take all of the drugs on offer, and I'd maybe take more drugs on top of that.

Let me tell you, though, one woman who has put me off ever giving birth - even with a fistful of happy pills - is Emma Millar from New South Wales, Australia. This poor lady had to give birth to a baby weighing an astonishing thirteen pounds.

Do you know what else weighs thirteen pounds?

A gallon of paint. Have you ever tried to take a gallon of paint from the shelf of a DIY store? Those things aren't light. They're not small either...

Funny how some people dream of having a heavy baby.

I mean, I totally get it... fat babies are the cutest.

But I'm not sure that having one would solve my problems...

It certainly would be a big problem when trying to give birth to it.

I mean, the above example has just got a bit of regular baby fat. Rolls etc. are totally normal for a newborn.

This is a picture of babies with sumo wrestlers...

That's not what we're dealing with here - cute though they are.

Nor is baby Remi wearing some kind of sumo suit.

I swear, this baby, who has been described as a "mini-sumo wrestler," really can pull off a sumo vibe all on her own. No costume necessary.

Carrying a baby this big must have been a struggle.

Emma Millar had already given birth to two children before baby Remi. The family's other children were also pretty heavy - their second child, Willow, had weighed a staggering twelve pounds when she was born. That being said, she had no idea that Remi would get so big

They don't expect sumo-sized Remi to stay big for long.

Her father, Daniel, told The Sydney Morning Herald: "Willow was a big girl too, but she’s stick-thin now so it evens itself out."

According to Emma, the fact that all three of her kids were so big had something to do with her gestational diabetes.

Knowing that her babies would probably come out as mini-sumo wrestlers...

Emma has chosen to have C-Sections with all three of her children.

I don't think any good would come from trying to squeeze out something the same weight as a gallon of paint.

I mean, you could always hang it over your kids...

Surely they would have to do everything you say and look after you when you're old if you went through that.  I mean, they should do that anyway but, eh, kids.

I swear, most of that sumo-weight is all in her cute lil baby cheeks.

Baby Remi sure could go as a sumo-wrestler for Halloween.

Remi sure does have a bit of a grumpy vibe. Maybe this was taken just before her feed?

There's just something so cute about baby Remi. Is it just me, or does she kind of look like an old man? Maybe we've got a Benjamin Button case on our hands. Speaking of babies... continue scrolling to see just how much baby Archie looks like Prince Harry!