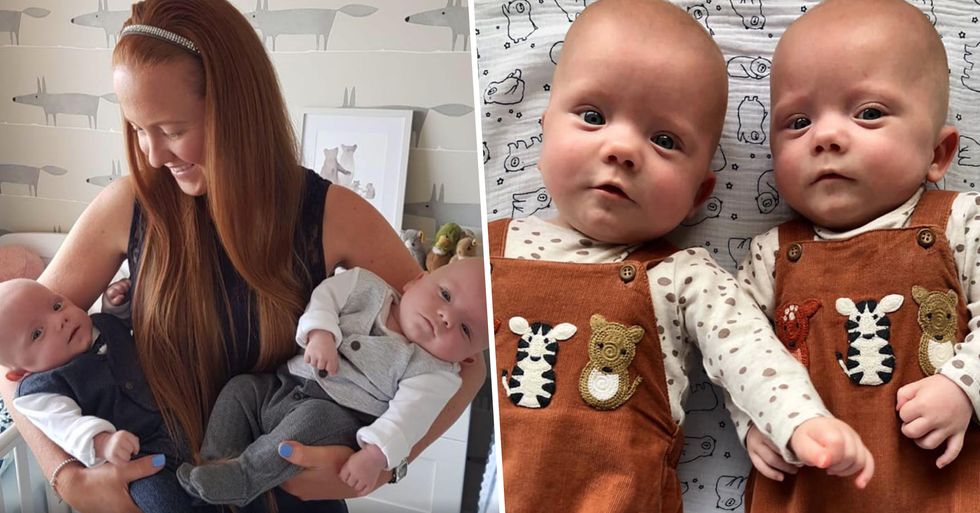 A mom was in labor with her twin boys when they ended up being born 2 days apart because her labor "stopped."

This is not just an unbelievable story, but this is also a miracle...

Being a twin is truly a wonderful thing...

And I'm not just writing that because I have a twin myself! As any person who has a twin can agree, an intense bond is formed from birth and it will last a lifetime.

Twins are a rather unlikely occurrence, however.

According to the American Society for Reproductive Medicine (ASRM), only approximately one in 250 pregnancies results in twins.

But the births of twins have increased significantly over the years...

And this is thanks to fertility treatments, IVF, and women choosing to have children at a later age.

Twins have an incredibly unique bond from the moment they are born...

Because sharing a womb for 9 months is a pretty big deal.

Sharing a birthday is also a pretty big deal...

But what about those sets of twins who are born within a few minutes of each other... but on a different day?

Often, the parents just settle on a favored date...

So the twin who was born at 11.58 pm will still share the same birthday as their sibling who arrived at 00.03 am the next day.

But what about twins who are born on separate days?

Well, as unusual as this may be, this was a reality for a British mom whose twin boys were born 2 days apart from each other.

And back in 2019, she welcomed her 2 beautiful twin boys into the world - Dylan and Oscar.

But their entrance into the world wasn't as smooth as Joanne had hoped.

Her waters broke on January 10th at just twenty-four weeks, and although this is a common occurrence for moms carrying twins, this shocked Joanne and it brought on a lot of worry and anxiety.

This was completely unexpected...

"I had a lovely pregnancy and I was enjoying every second as everything was running smoothly with no cravings and barely any sickness," Joanne explained in an interview. "I had a scan a week before my waters broke and everything was fine so I was very confused and panicked when my waters had broke at twenty-four weeks and 5 days."

Joanne and her partner, Anthony, rushed to the nearby hospital...

And just a few hours later, she was in labor.

Dylan was the first twin to be born, weighing just 1lb and 10oz.

But the poor little boy had to be resuscitated by doctors for almost thirty minutes. "We almost lost him which was very traumatic. It was so strange as I was focusing on him but also bracing myself to push again but hours passed and nothing happened," Joanne recalled.

The clock ticked on and there was no sign of Dylan's (slightly younger) brother.

"Time passed but nothing happened and the doctor said I have to stay on strict bed rest to try and keep the other baby in for as long as possible," the mom said. "I was shocked as I didn’t know that was possible. In a way, I just wanted Oscar to come too as it felt weird having one but not the other."

Sadly, it seemed that Joanne's labor had just stopped dead in its tracks...

And it took 2 days for little Oscar to finally arrive, weighing just 2lb.

But the boys were very unwell in their first few days.

They were both kept apart and were living on ventilators. Joanne wasn’t even able to hold her sons until they were 2 weeks old, and described them as "delicate and poorly."

Once they were well enough to come home, the boys were kept apart for the first few months of their lives...

And they didn't share a cot until they were 3 months old - which is a very long time for twins to be kept apart.

Whilst Joanne was concerned that their time apart would affect their twin bond...

Nineteen months on, the boys are inseparable and they are doing better than ever.

They are acting as twins should be acting.

"I had nothing to worry about in terms of their bond as they are very much aware that they are twins – they can’t settle without one another," Joanne explained.

Oscar and Dylan will grow to be inseparable.

"If one leaves the room, then the other will cry. They also love to annoy one another."

Keep on reading to learn about the twin sisters who married twin brothers... who got pregnant at the same time...