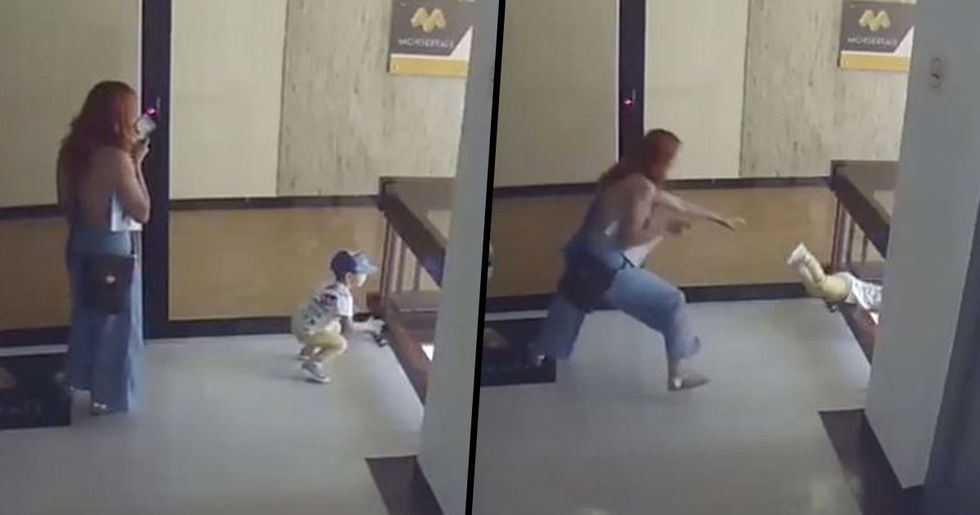 Becoming a parent is undoubtedly one of the most challenging responsibilities that life could throw at you. You can read as many parenting books as you want, but nothing can prepare you for the ups and downs of parenting. From toddler tantrums to teenage angst, there's a whole range of things that you'll have to deal with as soon as you decide that it's time to bring another soul into the world.

Recently, a video has surfaced online showing CCTV footage of a mom jumping to the rescue as her son is on the brink of a very nasty accident. Keep scrolling to see the full-length clip that has had the whole of the internet on the edge of their seats as well as our top 10 picks for the most heroic parents of all time!

The responsibility of a parent goes above and beyond any other job in the world.

As well as putting up with temper tantrums and constantly being underappreciated for all of their efforts, moms and dads around the globe are also our local heros.

"JukinVideo" compiled a list of the top 10 times that parents have saved children just before disaster strikes! Let's have a little look at some of our most heroic parents.

This child narrowly missed hitting the waves as their father saw them slipping off the surfboard and managed to catch them just in time.

This mother realized that her child's voice sounded a bit funny. And her intuitions were right. She blew into her daughter's mouth and a random gold ball came flying out of her nostrils!

This one really had my heart racing. A typical day out to the beach typically involves a little paddle in the sea. However, his South Korean family were not expecting their child to be dragged far out by the crashing waves. A whole array of concerned adults jump to the rescue, grabbing the little boy before he was fully submerged underwater.

Birthdays are a special moment for children and their parents because they mark just how quickly they go from being a toddler to an adult. For this father, though, his main responsibility was saving the cake and we totally respect that.

This video trended online as a consequence of the father's exceptional reflex skills, narrowly avoiding disaster by the foot! The child can be seen to topple over the edge of the bed, but, thankfully, she's grabbed and pulled back before disaster could strike.

It's not just small children that parents are there to save. Sometimes, even grown adults require the help of their parents. This young man thought that he would make a video to post on the internet, but didn't realize the dangers of the item that he was holding. Shortly after starting the video, it exploded in his face. The hazardous, green substance can be seen hitting him directly in the eye and his screams alerted his father, who jumped to the rescue while telling his son off at the same time! A multi-tasking hero.

Another good catch by a father. The child leans forward in the chair without knowing the consequences of her actions, but, before she can hit the ground, thankfully, she is caught. That was a close one!

3. Too close for comfort.

This is another classic scenario. Children don't ever seem to be aware of where they're going, and, ninety percent of the time, are always heading straight for disaster. Thank God dads are always watching!

Sometimes kids really do amaze me. How on Earth did this little girl manage to climb into a claw machine? I get that winning a toy is hard, but it really isn't worth getting yourself stuck in there. In the end, her mother, along with a couple of other people, managed to pull her out without any injuries.

Slides are fun no matter your age, but they can also be dangerous. This toddler would have taken a nasty fall if his father had not managed to catch him just in time. Another heroic catch for the dads! Watch the full video of each incident here!

So we've seen just how incredible parents can be.

And this mother is no different. She recently made headlines for managing to save her son's life with the use of her quick reflexes.

The CCTV footage shows her getting out of the elevator with her son.

The mother and son duo are seen waiting outside a door at the Monserrate construction company's office in the Laureles Colonial building in Colombia.

Her son seemed to be curious about the view through the rail might be, so he went to have a look. That's when the unthinkable happened.

Just as he tried to lean on it, thinking there was a sheet of glass between the gap, he falls to his knees and then straight through the railings of the fourth floor! In an instant, you can see his mother leap into action, grabbing her son by the foot and, ultimately, saving his life.

This user asks: "who's better than mom?" Honestly, no one.

Have a look at the full-length video of this mother's incredible reflexes.

It's really quite amazing.

It's not been confirmed whether or not the child was injured in the incident...

But the clip leaves you fearing for what could have happened to him if his mom hadn't noticed. You can see, after she makes the jump, other workers in the building rushing to her aid including the delivery man who runs down the stairs to offer assistance from the other end. Even so, if she had let go, the child would have toppled down four floors until he hit the ground. A parent's worst nightmare.

However, some have criticized the mother, as the footage shows that she was on her phone.

Maybe if she had been paying better attention, she would have realized that there was no glass between the railings. Others are just glad that the child was saved, which I think is the most important thing in all of this. Sometimes, there's just no way of telling whether or not an accident is going to happen.

It has not yet been revealed if she plans on filing a lawsuit against the company for their unsafe environment.

According to reports, these kind of railings are not fit for purpose and this CCTV footage is proof of this. Many people are prompting her to sue the company for their carelessness in regards to their safety precautions. All in all, we're just thankful that both the mother and child are safe.