But Darian has faced some criticism over the incident. | 22 Words 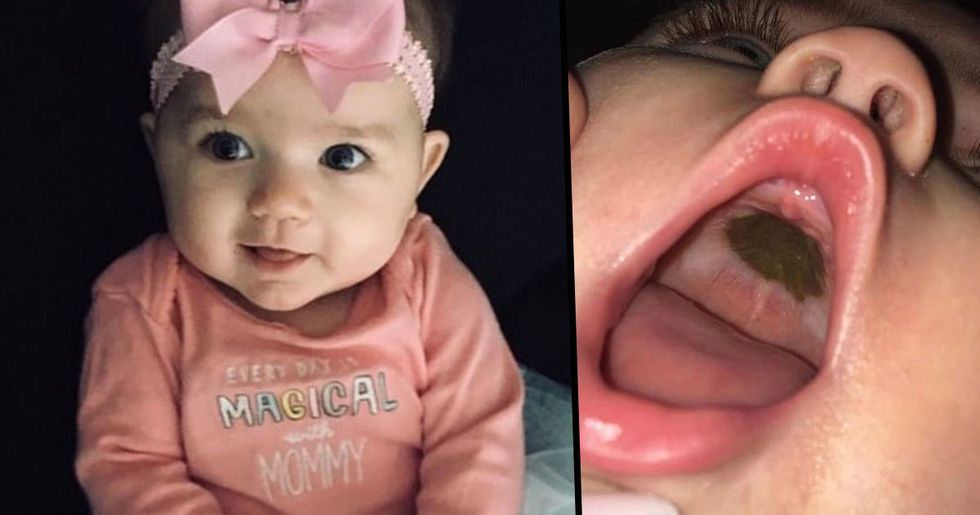 Being a parent is no easy journey. Every little thing that your baby does will have you either questioning your own sanity or resorting to googling some bizarre symptoms (not a good idea, trust me...).

Every mother wants their child to be as healthy as they can be, so it's fairly common for some moms to go a little overboard sometimes. Kid has a cough? Straight to the pediatrician. They sneezed? The emergency room it is.

So when one young mom noticed a slightly unusual mark on the roof of her baby's mouth, she had every right to be concerned. However, after a trip to the doctor's office and some good old-fashioned viral treatment online, she was left feeling a little silly after finding out what the mark was. It was an easy mistake to make, I'm sure...

Being a new mom can be stressful.

It's a traditional part of new parenthood - you freak out over anything that your child does that's slightly out of the ordinary. Which is pretty understandable; you've just been lumbered with the overwhelming responsibility of keeping a small child alive. No biggie.

You will over-analyze their every move.

Did they just walk with a limp? Did they just cough in a different way to last time? Are they blinking weird?! The questions and the panics will be endless.

And the doctor's room will become your second home.

You'll hate to admit it, but you'll become a low-key regular at your doctor's. Chances are, you're not a qualified doctor, so you will obviously drag your child in every other day for a quick, but very necessary, check-up.

Though things can get embarrassing when you're proven wrong.

Even though you know your baby better than anyone else, there's always the likelihood that you might have over-reacted just a little bit. It's never nice to be told that you're wrong, and even worse when it's coming from a doctor with a long waiting list.

Some cases are more embarrassing than the rest.

Going to the doctor's can be embarrassing for all of us. No matter what the issue is, it simply isn't a pleasant experience. Most of us don't enjoy discussing the grizzly details of our malfunctioning bodies, so laying it bare to a doctor can be somewhat uncomfortable.

And one mom-of-two has a story that's the most embarrassing of them all.

I'm sure that everyone is convinced that they have the most humiliating story. But, I'm sure that you'll reevaluate after reading this unfortunate mom's story of her trip to the emergency room.

This story involves one mom and her trip to the doctor's.

Darian Depreta, aged twenty-three, shared her fateful trip to the doctor's on Facebook. And, with the internet being the internet, the post instantly went viral, reaching thousands of people across the world.

She had spotted an unusual mark on the roof of her baby daughter's mouth.

While playing with her daughter, Bella, Darian spotted a strange, circular mark in her mouth. She tried and failed to remove the mark, so she decided to consult a doctor. A seemingly natural response, we think.

This is when things get weird...

Explaining in a post on Facebook, Darian wrote about her initial panic, "I immediately called Chandler, my mom and best friend in a panic. I make her a doctors appointment that was about 30 minutes from the time I noticed her mouth."

Darian then rushed her baby daughter to the doctor's.

Once there, Darian and Bella were seen to straight away by a nurse practitioner. But the mark wouldn't budge. Darian wrote, "I get to the doctors and the Nurse Practitioner tried to wipe it, and said she had never seen anything like it. She decides to consult with the doctors and they suggest maybe a birthmark. I INSISTED it was not because I always look in her mouth and clean it."

Darian was certain that it wasn't a birthmark.

A mother knows her baby best, I suppose. Darian was adamant that the mark wasn't a birthmark, and proceeded to argue with the nurse over the mystery mark.

After winning the birthmark argument, further medical help was called in. "I’m now being told that my daughter will be set up with two specialists. After insisting it wasn’t a birthmark on the roof of her mouth, the NP decided to take another look at this medical mystery."

She then noticed something odd...

Darian suddenly noticed that the sides and the edges of the mark had started to turn white. After pointing this out, the nurse practitioner proceeded to "really get in there" in attempt to scrape it out.

This is when things got embarrassing.

The nurse then managed to successfully remove the mark. Only, it wasn't a birthmark. It wasn't a dangerous skin ailment, or any other form of naturally-occurring skin condition, for that matter.

Yes, you read that correctly. The mystery mark in Bella's mouth was, in fact, a bit of cardboard. Writing in her Facebook post, Darian described her humiliation after the nurse had scraped the piece out: "ONLY TO FIND OUT IT WAS CARDBOARD FROM A BOX BELLA CHEWED STUCK TO THE ROOF OF HER MOUTH????????????? I can never show my face in that office again."

She even kept the fateful piece of cardboard as evidence.

Leaving the office understandably a little red-faced, Darian admitted that she both cried and laughed for a solid 5 minutes after making the discovery.

But Darian has faced some criticism over the incident.

There's always someone who likes to complain, isn't there? After a few negative comments about why her daughter was "allowed" to chew on cardboard (yes, really...) in the first place, Darian was forced to write an explanation: "Edit: Yes she could have choked on it and I’m thanking God she did not. The only reason it was posted was because after crying, panicking and trying to figure out what it was (the doctors didn’t even know), she was ok. The laugh was after the storm of it all."

As most of us know, kids will chew on pretty much anything.

Darian continued to explain: "And I don’t “let" my baby chew on cardboard. She’s teething and tries to chew on EVERYTHING. She just so happened to find a box while I was loading the dishwasher , which I of course took off of her right away. I just didn’t realise a piece got stuck up there."

It is virtually impossible to monitor your baby's every move, especially when they're in the nightmarish stage of teething.

So let's give the poor woman a break!

Thankfully, nothing disastrous happened. This story has simply shown us that babies will get their mouths around pretty much anything, and I think that Darian acted as any worried parent should do. Although she may want to avoid that particular nurse for a while...