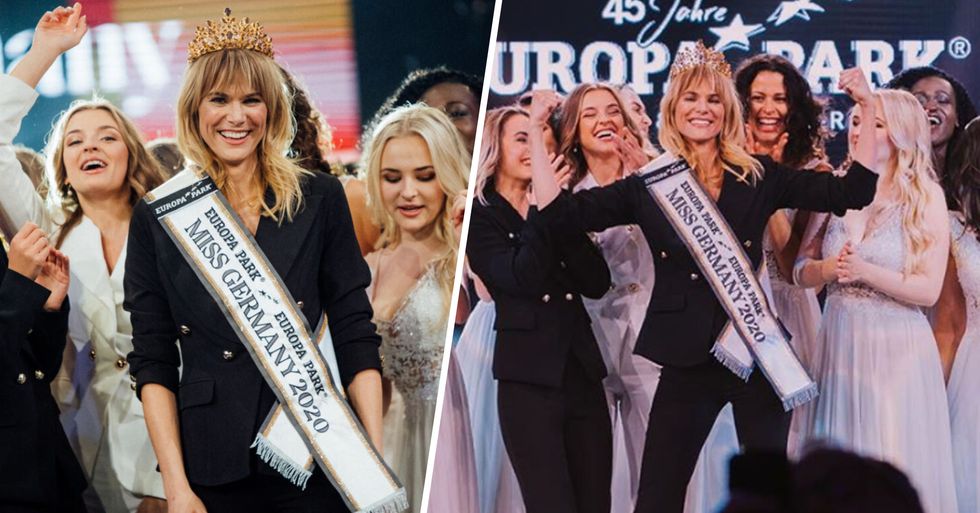 Mom Makes History After Being Crowned Oldest Miss Germany Ever

Over the years, beauty pageants have lost their credibility for the sexist and naive way in which they conduct themselves. However, after years of aligning themselves with more "traditional" values, it seems as if they are finally understanding the concept of moving with the times.

And it is reflected in the 2020 Miss Germany event that took place recently.

Keep scrolling to find out how this one mom made history after she won the crown...

Coming to us from the Europa-Park arena, Germany, the annual pageant was broadcasted all over the world.

Unlike previous years, 2020 became a year of change.

Even before the pageant began, it was advertised as a platform that "defines a whole new Germany."

The pageant did their best to move away from "traditional" values.

The ticket website read: "The candidates' personalities will be in the focus due to the brand new concept and show that charisma is much more important than just looks. The candidates will be accompanied by professional influencers such as Farina Opoku (novalanalove) and Carmen Kroll (carmushka) who all have their own authentic story and will accompany the candidates until the grand finale..."

And it truly was historic...

Firstly, an all-female judging panel was implemented throughout the competition which has never happened before. The line-up included a karate fighter, a TV host and a former right-wing politician.

However, future judges will not necessarily be all women.

Max Klemmer, the CEO of the Miss Germany Cooperation emphasized that any man chosen to be a judge will be screened to ensure that they are fully behind the new concept of the show.

And for good reasons too.

Previously, multiple men in the industry have been involved in scandals that involved misogyny and sexual assault.

The former CEO of Miss America was exposed back in 2017.

Sam Haskell's emails with other members of the board saw him use sexist and degrading language to describe the girls who took part in the contest and after they were publicly exposed, he had no choice but to resign.

So it's amazing to see that these kinds of competitions are evolving.

Aside from the changes mentioned above, the competition also cut out the bikini round and ensured a bigger focus on the women's personalities.

They also bent the rules so that moms could enter.

Historically, the pageant excluded women over the age of twenty-nine, married women and moms, but has now amended those conditions and added an extra 10 years onto the age restrictions.

And just to top it off, an older mom won the crown!

If the rules changing wasn't enough, just to show women that there aren't any restrictions on your beauty or your ambition, a thirty-five-year-old mom went on to beat 7,500 applicants and take the crown as Miss Germany 2020.

Introducing the woman of the hour, Leonie Charlotte von Hase.

While competing in the competition, she was also juggling her own online business and looking after a 3-year-old! And if that wasn't enough, she has also become the oldest woman in history to ever compete.

Leonie wasn't just crowed just because of her looks...

The judges came to the decision by combining her physical features, her intellect and her lifetime achievements.

On the Miss Germany website, she released a statement that described the importance of her win.

Note that this is a rough translation from German to English.

"My participation comes from full conviction and support of the concept change of Miss Germany. We women are no longer interested in striving for a conventional standard of beauty. My feeling of a 'beautiful' woman is the strength, character and authenticity that she exudes."

"She [must be] experienced in ups and downs, trained by teachings and mistakes, joys and fears - a woman who uses her weaknesses as strengths."

"It is important for me to set an example," she says.

"Unfortunately, in the ‘influencer’ age, this ['influencer'] woman seems to be the only focus. For me, a full life is adorned with risks and growth - always according to the motto of self-determination. This attitude helped me to find my authentic self, regardless of my sense of achievement."

She also talks about her background and what got her to this position.

"Born in Namibia, my identity as a fourth-generation German-African is interwoven with cultural influences. In Cape Town I studied drama, English literature & media studies, and finally graduated in ‘Creative Brand Strategy’."

But she's done a lot of other jobs too.

"In 15 years I have worked as a waitress, copywriter, marketing consultant, event organizer, design buyer & agent, stylist, creative director, journalist, ghostwriter, food blogger, model & actress; lived in London, Stuttgart, Berlin, Athens and Milan. My creative expression has always been central to my tasks, this impulse is also the one that gets me out of bed in the morning."

"Today I run THE LEONIE STORE, an e-shop for vintage clothes & objects. Combined with my passion for fashion, style & design, THE LEONIE STORE is a media platform & shopping experience which should motivate to tackle sustainable consumer behavior as an everyday, inspiring process."

We're very glad to see society changing with the times, and if you want to read more about archaic laws being overturned, then keep scrolling.