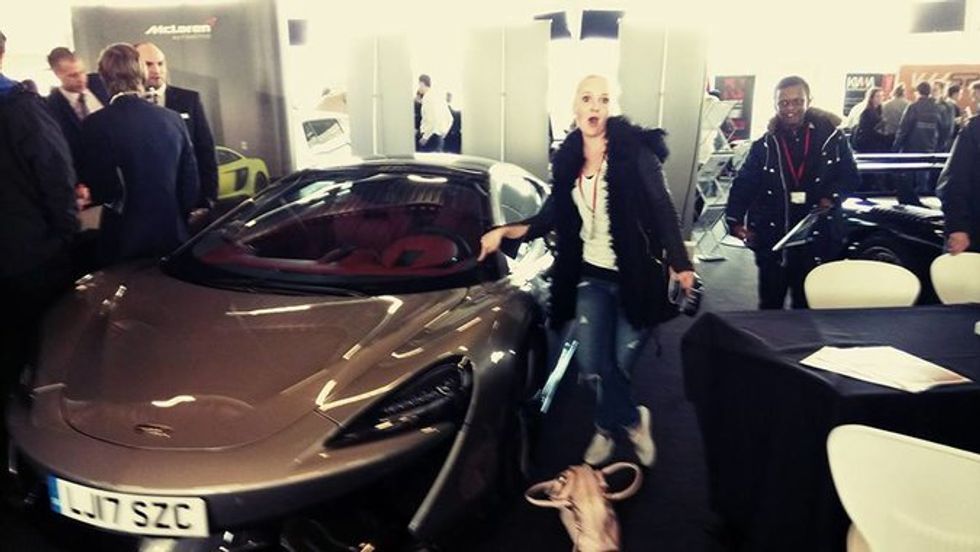 Abby Heugel
“They’re not really after me working there, they’re looking for something more,” the former stripper told The Daily Star. “I think they’re just dirty big perverts. They’ll say things like, ‘What do you do when the kids aren’t around, would you fancy going for a drink, would there be anything else you’d like to do in the garage other than work on cars?'”

Kind of, at least if that mom is Marie Buchan, a 37-year-old from Birmingham, England, with eight kids between the ages of three and fifteen.

She receives almost $40,000 a year in welfare benefits because she just can't keep a job. Why? She says she can't get hired because she's too attractive.

Marie has been attempting to get a job fixing cars, but alleges that many of the body shops she's gone to (mostly run by men) will not hire her as a mechanic because of her looks.

“They’re not really after me working there, they’re looking for something more," the former stripper told The Daily Star. "I think they’re just dirty big perverts. They’ll say things like, 'What do you do when the kids aren’t around, would you fancy going for a drink, would there be anything else you’d like to do in the garage other than work on cars?'"

But the thing is, being a mechanic is Marie's dream job, and she's even more motivated to score the gig so she can combat the sexism that is apparent in the male-dominated field.

"I’m sick of driving into a garage where most mechanics seem to think, ‘We can rip her off, she’s a woman,’" she said. “It’s always been my dream and women are always getting ripped off — I want to put a stop to that."

Marie not only has the qualifications to work at a garage, but she's spent the past year taking mechanic classes. The problem is that these alleged sexist attitudes prevent her from getting a coveted apprenticeship.

“You’ve got women in the police force, in the Army, we have the skills, it’s just that men see us as sex symbols," she said. “I’m not going to be able to get the experience I need in a garage full of men. But there aren’t any women mechanics in my area, so I don’t know where it’s going to come from."

To make matters more complicated for Marie, she's been blasted by critics for abusing the welfare system, which to reiterate, provides her with about $40,000 a year to care for her eight kids.

Marie, dubbed "Octomom", previously served as a personal support worker, but since she only logged 16 hours a week, she was still able to claim benefits. The problem is that $6,000 was cut from her welfare total AND her kids no longer qualified for free lunches at school, so Marie insisted she was "better off not working". However, on an appearance on U.K. show This Morning, she revealed she would rather save those care worker wages to get breast implants, because "'child tax credits and working tax credits pay for the kids." What's that now?

The enhancement would cost up to $6,000, and Marie says it's worth every penny.

"I am doing this for myself not for anyone else," Marie told The Daily Star. "I feel after having eight children I need a little bit of help firming things up." For what it's worth, she noted her boyfriend would be footing the bill. Now that's love.

But in the end, Marie isn't backing down from her desire to become a certified mechanic.

"I'm trying so hard," she lamented. "If someone would just give me the opportunity, I would prove them wrong. I know exactly what I’m doing."