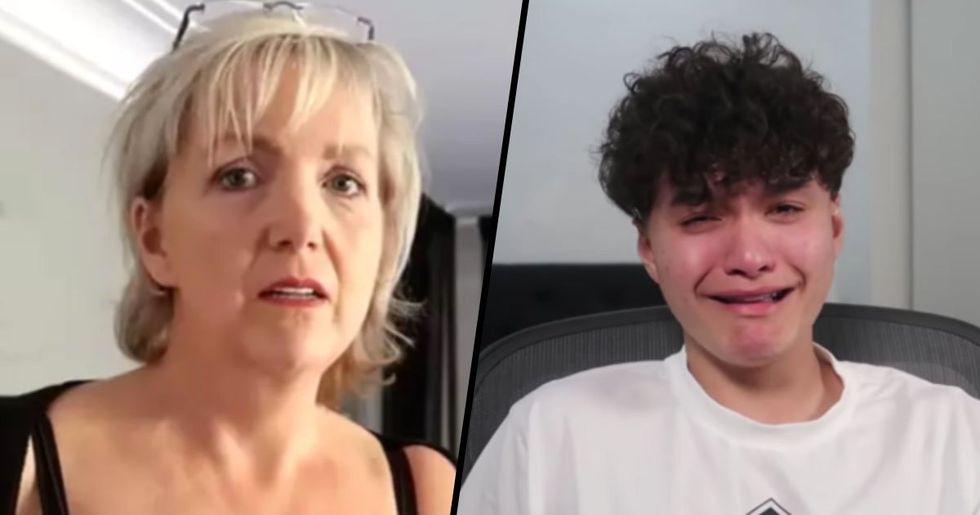 The professional Fortnite gamer, Jarvis Kaye, has been slapped with a lifetime ban from the game after he was caught cheating.

Now, nobody likes a sore loser... Especially when said loser has been caught red-handed using cheat technologies. So, quite understandably, opinions were divided when Jarvis released a video addressing his wrong-doing... And tearfully begging Epic Games to lift his lifetime ban.

Some sympathized with the gamer, while others weren't too convinced. Cheating's cheating, right?

But now, Jarvis' mom has come forward and spoken out about her son's ordeal and has revealed what the lifetime ban has really done to the teen. Keep scrolling to hear what she had to say on the matter...

Jarvis Kaye has made quite the name for himself amongst the gaming community.

The seventeen-year-old launched his YouTube channel in March 2018, and has since gained a staggering 2 million subscribers.

The British-born teen shot to gaming stardom after he became a part of the FaZe Clan - An American esports and entertainment organization which enables its members to compete in various video game tournaments.

And he has uploaded thousands of streams of him playing and competing in games of Fortnite onto his YouTube Channel.

But what exactly is Fortnite?

Developed by Epic Games in 2017, Fortnite is a battle royale-style survival shooter game in which players are able to create their own superhero avatar and compete against each other on a dystopian island to be the last one standing.

The game has become immensely popular with youngsters all over the world...

Fortnite is free to download but comes with additional content available via in-app purchases, including new skins, dance moves (we all know the floss...), and accessories for in-game avatars.

The game has an audience of over 125 million players.

So the market for professional gamers to compete and stream their games of Fortnite is a pretty big one.

But the big rule for the professionals?

Cheating is massively frowned upon in the world of gaming, and the punishments are taken very seriously.

So, when Jarvis was caught using a cheat code on several of his streams...

Epic Games put their foot down and slapped the teen with a lifetime ban from Fortnite. They have also banned Jarvis from attending any future Fortnite events, and have forbidden him from having any further involvement in the Fortnite community.

But he did upload several videos showing him using Aimbots - a cheat code that allows competitors to shoot others without taking careful aim - in a public game using an alternative account.

The gamer quickly issued an apology to his fans over Twitter...

I’m going to take accountability for my actions and I understand completely why this has happened, I just wish I ha… https://t.co/992p1OJEFT
— FaZe Jarvis (@FaZe Jarvis)1572813509.0

He wrote: "I’m going to take accountability for my actions and I understand completely why this has happened, I just wish I had known how severe the consequences were at the time and I would have never thought about doing it."

And then came the video...

Jarvis uploaded a lengthy video to his YouTube channel, in which he addressed what had happened. The teen was visibly shaken up as he explained, "I'm not really sure how to say this, but I have to say this so that no one makes the same mistake I have done... I'm not sure how many of you know this, but I've actually been permanently banned off Fortnite for life."

He went on to explain why he had been banned from the game.

And he insisted that there was nothing malicious about his actions - He was only thinking of his fans the entire time. "Recently I posted some videos of me using aimbot and solos and playground mode and just all I was thinking about whilst I was making those videos were just how entertaining and interesting these videos would be for you guys to watch."

And he stressed that he had never used the Aimbot cheat in any of his competitive matches.

"It didn't even cross my mind to think that I could be banned for life from Fortnite from those videos." He said solemnly to the camera. "I just want to be clear that this is the first time that I have ever done anything like this and of course I have never done this in a competitive game mode at all."

The teen was becoming visibly more agitated throughout the video...

And his eyes began to glisten with tears as he frantically apologized to his fans and to Epic Games.

And when he mentioned his banishment from the Fortnite community...

The gamer clearly became overcome with emotion, and stopped talking to put his head in his hands.

He then broke down in tears.

"Epic Games you know I know how big of a mistake I've made and I'm truly like so sorry. Epic, I know I have to take accountability for my actions and I'm going to do my best to accept any punishment that comes my way."

He insists that he had no idea he was making such a severe mistake.

Through his tears and sobs, he explained: "I just wish I'd have known how badly I was messing up, or I would never have even thought of making those types of videos."

Many people were quick to show their support for Jarvis...

And his fans have slammed Epic Games for treating the teen unfairly. And some have even started the hashtag, #freejarvis, in an attempt to get the gamers suspension lifted.

Members of the Fortnite community have rallied in to support Jarvis...

@liljarviss Iknow it hurts to feel like everything you worked so hard for was just taken away from you in an instan… https://t.co/zGMBOmPMQe
— FaZe Nate Hill (@FaZe Nate Hill)1572815011.0

And have urged the teen to appeal his lifetime ban.

Many sympathize with the gamer...

@liljarviss Mistakes happen. It was obvious from your video that you didn’t have any malicious intent and that you… https://t.co/kQUC54hmml
— Maddynf (@Maddynf)1572821433.0

And can see that there was no malicious intent behind his use of Aimbots.

But others weren't too sympathetic...

And simply said that Jarvis knew the rules and that he would have to deal with the consequences of his actions.

Because cheating is cheating, at the end of the day.

But, despite the support of his fans, things aren't looking too good for Jarvis.
A spokesperson for Epic Games told The Independent: "We have a zero-tolerance policy for the usage of cheat software. When people use Aimbots or other cheat technologies to gain an unfair advantage, they ruin games for people who are playing fairly."

It's easy to forget that Jarvis is still a child...

So, of course, his family have rallied in to support him during this difficult time.

Jarvis' brother is also a big name amongst the gaming community...

And has expressed his support of his little brother over Twitter by slamming Epic Games for "destroying a seventeen-year-olds life."

And he has highlighted the absurdity of a lifetime ban...

Cheating for the purpose of winning money, stealing money from other competitors, stealing a spot at WC = 2 weeks… https://t.co/SlJEqlz83c
— FaZe Banks (@FaZe Banks)1572988223.0

By commenting on previous punishments dished out by Epic Games, in which they only banned players for 2 weeks.

And now, his mom has spoken out.

Barbara Khattri is the mother of both gamers, and she has revealed how the lifetime ban has "broken" her youngest son.

She has slammed the gaming community for their treatment of her son.

Speaking to the MailOnline from the family home in Surrey, England, Barbara admitted that her son had made a mistake, but the "gaming community needs to re-think how it treats people."

And she has defiantly defended her son.

"He's broken. He loves that game. He doesn't have a devious bone in his body and what I really know is that for any mistake that doesn't physically harm a person there should be the chance to make amends."

She wrote: "It's my turn at the moment to be feeling that abject pain, despair, and helplessness today. My youngest son Jarvis made a genuine, naive error of judgment and is currently banned for life from something he loves."

She admitted that it's been a long and tough week for the family.

She wrote in the post, which has since been deleted: "As not only a parent and a boss but mostly as just a person, I know first hand how so often the lesson is so much better learned when there is the opportunity to take full responsibility, and actually in whatever way fix or right the wrong!"

And she admitted that the full family is scared about Jarvis' uncertain future.

"I pray for Jarvis that this is the case for him. I'm not looking for agreement with my point of view at all, I just thought that there's as much power in sharing when we feel scared and confused as when we're on top of the world."

Though many have encouraged the teen to appeal his lifetime ban, Epic Games are yet to make any further comments on their decision. Let's hope Jarvis has learned his lesson and has realized that cheating never gets anyone anywhere.