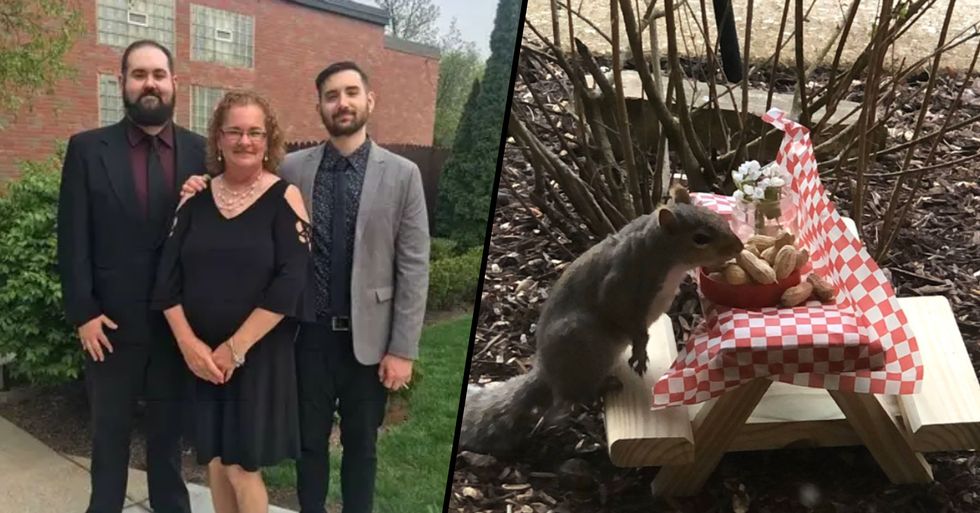 Out of the millions who are sadly unemployed due to the pandemic, one mom has created the best business selling tiny picnic tables... especially for squirrels.

Keep scrolling to check out these adorable little inventions...

Millions of people are now living in unemployment thanks to the global pandemic...

And one mom who lost her job has created an amazing little business for the most unlikely of customers.

Since the global pandemic had its first outbreak back in December...

It has completely taken the world by a storm.

More than 3 million people around the world are now infected with the virus...

And over 200,000 have tragically lost their lives.

And now, the United States is the worst affected country in the world.

Our country has taken a brutal hit and way too many people have lost their lives at the hands of this deadly virus.

It's sad to admit that we, as a country, haven't been handling this situation very well

Hundreds of thousands haven't been abiding by the government's advice to self-isolate and practice social distancing... which has ultimately spread the virus even more.

People need to realize the severity of the situation...

Or else, more lives will continue to be lost.

Of course, living in lockdown isn't at all easy...

And millions of people around the world have found themselves unemployed thanks to the closure of many businesses - including bars, restaurants, retailers, and schools.

This is an unbelievably difficult time...

And so many people are now struggling to make ends meet which is terribly stressful - especially for families.

But one mom who has found herself out of work came up with an amazing business venture...

And it well and truly paid off!

This is Maria Trezza...

And before the pandemic, she worked as a lunchroom and playground aid at a school in Bolingbrook, Illinois.

The fifty-six-year-old mom is now out of work...

And, like many others, she is spending her time at home with a lot of time to kill.

It all started when a friend posted a photo on Facebook of a very cute wooden table built for squirrels.

Thankfully, her neighbor Rob was on hand to help...

He surprised Maris by making one for her 2 days later. Maria explained that she brings him baked goods from time to time, so this was his nice gesture back.

The table was an instant hit online...

"I decorated it with a little tablecloth and little flowers, and I posted it to Facebook and people were like, 'I want one!'" Maria said. So, she convinced Rob to make a few more to sell to her friends.

During this time, her son Dominick found out about her new little hobby...

So he decided to tweet about his mom's little venture.

Just look at how cute this is!

And clearly, everyone else agrees! "I decided to tweet about it to see if any of my friends would want one and it instantly blew up — I’m not sure how, but it’s been crazy ever since," Dominick explained about his tweet, which has now been liked over 105,000 times.

And it is an extra $2 for a tiny picnic blanket and bow-wrapped peanuts for your squirrels.

Even though Dominick lives across the country from his mom...

According to Maria, Rob made twenty-seven tables over the weekend, and customers and strangers on the internet love them.

Maria is actually unsure as to why people have taken such a liking to her tables...

"I can’t believe how many people have even commented on my son’s tweet. I can’t wrap my brain around. That’s for one," she said. "The people that I have met 10 feet away and talking to them has been unbelievable. They’re friendly. It makes me feel so good during this time, to see them happy. That’s really the biggest thing."

She has even been receiving kind letters in the post...

"They’re so excited - it’s so funny to see how happy they are to see a little table," Maria said of her customers. "I’ve met some super nice people."

A big congratulations on the business, Maria!

For more heartwarming stories, keep scrolling to read about the Colorado man who won the $1 million Powerball twice in one day...