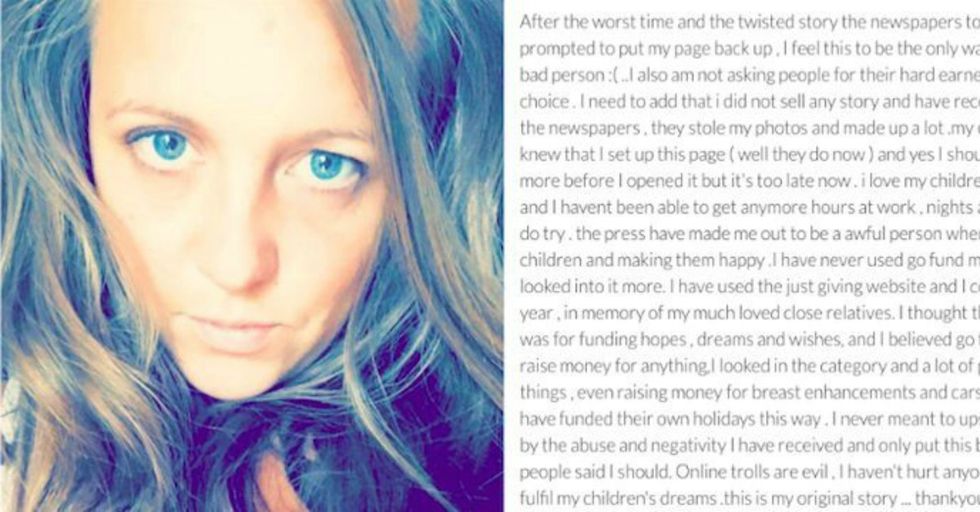 Most crowdfunding campaigns are launched for charitable reasons, but when a British mom used her GoFundMe page to raise money for her two kids, it sparked a huge backlash online.

33-year-old Nikki Smith set up the campaign in hopes to raise $6,000 for her and her two girls to go on vacation to Disney World in Florida.

In her impassioned post, she explained that two "very special people" in their lives died over the past couple of years", and a trip to the States would "give them so much to look forward to". Nikki revealed that due to childcare and contract hours, she only works two night a week in a local hospital, and her salary is not enough to fund a trip to the most magical place on Earth.

Soon after her campaign was launched, critics on the internet took note and lashed out at Nikki for her unconventional way of making her kids' dreams come true.

In the comments section, one person wrote, "There are plenty of families who struggle with money that save for holidays regardless of how long it takes," while another argued, "This just ruins the actual purpose of the page, there should be an admin who monitors it." After receiving hundreds of similar negative comments, Nikki shut it down - but later reopened the GoFundMe page to defend her decision to ask strangers for money - and even raised her goal to $12,000.

"I will not be shamed because I wanted to do more for my children," she stated.

Nikki said she was a newcomer to GoFundMe, and insisted she thought the site was for "funding hopes, dreams and wishes," believing the platform was a "chance to raise money for anything." The dedicated mother noted she never meant any ill will with the campaign, writing, "I also am not asking people for their hard earned money, people have a choice, if I had lied and said one of my children was ill when they weren't to raise the money I could have understood the backlash but I was totally upfront and honest... I never meant to upset anyone."

Nikki noted that she's had a very difficult time dealing with the blowback from both online critics and the nasty journalists in the media.

"I'm traumatised by the abuse and negativity I have received," she continued. "I won't let anyone bully me anymore, Online trolls are hurtful and cruel , I haven't hurt anyone and I was only trying to fulfil my children's dreams." After gaining all the media attention, there have been plenty of giving souls who want to see Nikki's kids have the time of their lives in Disney World - she's raised nearly $9,500 of the new goal. What say you, Internet? Is she being scrappy or selfish?