A Distraught Mom Shuts Down Selfish Anti-vaxxers Once and For All...Hopefully | 22 Words 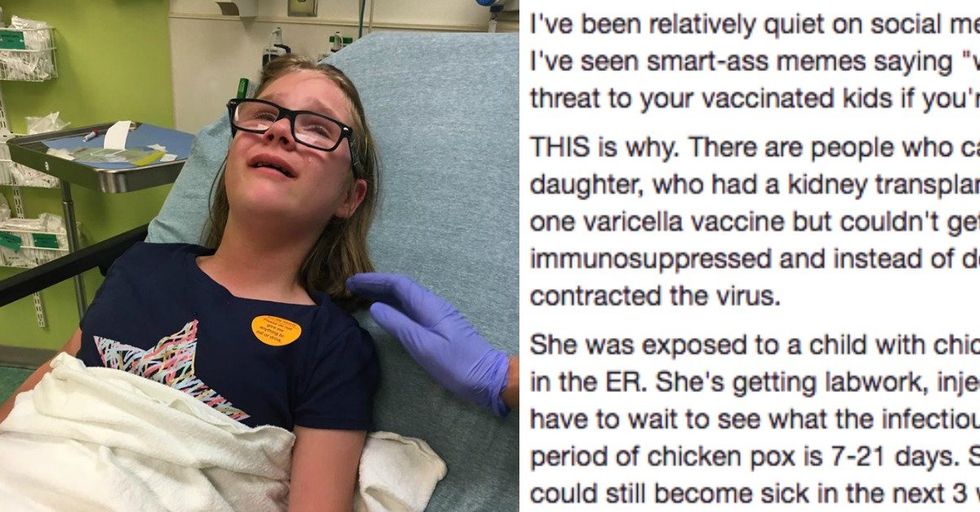 A Distraught Mom Shuts Down Selfish Anti-vaxxers Once and For All...Hopefully

To say that the issue about childhood vaccination is a hot topic of debate would be an understatement. While there are many myths about immunization — most of which have been proven to be completely false — what is 100 percent true is that not vaccinating your child is a move that could potentially cost other children their lives.

Just ask mom and registered nurse Camille Echols, who wrote about her recent experience with her daughter to warn other parents about the danger of not choosing immunizations.

Her 11-year-old daughter Ashley had a kidney transplant at age two which prevented her from being able to be vaccinated against chicken pox.

Echols wrote: "I've been relatively quiet on social media about the 'Anti-vax' movement. I've seen smart-ass memes saying 'why would my unvaccinated kids be a threat to your vaccinated kids if you're so sure they work?' THIS is why. There are people who cannot have live vaccines, like my daughter, who had a kidney transplant when she was 2 years old. She got one varicella vaccine but couldn't get the second because she was immunosuppressed and instead of developing immunity, she would have contracted the virus. She was exposed to a child with chickenpox this weekend and now we are in the ER. She's getting labwork, injections of immunoglobulin and then we have to wait to see what the infectious disease doctor says. The incubation period of chicken pox is 7-21 days. So even with all we are doing, she could still become sick in the next 3 weeks. And that would mean an automatic admission to the hospital for IV antiviral meds. She could become very, very sick from this."

She went on to beg:

"Please, if you are someone who believes your child will get autism from vaccines, PLEASE educate yourself. There isn't a single peer reviewed study that came to that conclusion. And the people choosing to skip vaccinations put children like my daughter at risk. She has been through SO much already. And this was avoidable."

Echols doesn't know if the kid who had chicken pox had been vaccinated previously or not, but she says that's beside the point.

'The resurgence of chicken pox, whooping cough, measles and other diseases that were nearly eradicated years ago is a direct result of a large percentage of the population deciding not to vaccinate their children without sound research the support that decision," she explained.

"As a kidney recipient who works with school-age children every day, I am always concerned about infectious transmission. Please keep up the good fight for vaccination. Best wishes to your courageous daughter," added another.

Most were in support of her plea.

"Thank you for sharing your story publicly. I think people need to see the effects their decision not to vaccinate can cause. I work in public health and the anti-vax movement makes me crazy!!! As you have stated, science has proven vaccines to be safe and effective. I just do not understand people who are not willing to accept the scientific evidence! I wish you and your family all the best!" wrote another commenter.

Of course there were those on the other side of the fence.

"All these drug companies push the vaccines because of the all mighty $$ don't kid yourself look at the guy who up medication from$36.00 to $500 .00 It's to political to me not enough testing and you can't believe everything you read and hear so you have to make your own decisions don't let people tell you what to do," added another. As for Echols, she went on to offer an update...

"All of this was preventable," she said. "The intent behind the post wasn't to shame parents, but to encourage them to educate themselves."

"I had a rare opportunity as a mother and nurse in one to share this information," she added. And to those who told her,“it’s just chicken pox, she won’t die," it should be noted that based on a Clinical Kidney Journal study, “Chicken pox…which is a benign disease with a largely stable course among the general population, can have severe outcomes for immunocompromised patients, accounting for almost 90% with significant morbidity and mortality in…infected patients." That would include her daughter, who thankfully, has made a full recovery. It could have ended much worse.