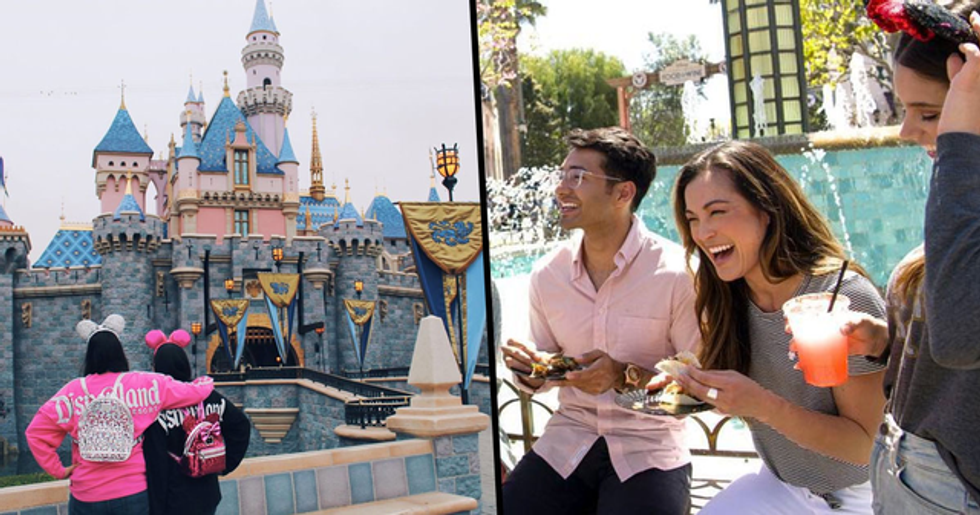 Mom Says Childless Millennials Should Be Banned From Disney World

Disney World is widely regarded as one of the happiest places on Earth.

With an array of attractions and rollercoasters for people of all ages, Disney World provides fun for all the family... Well, only the family members who have children, apparently.

One disgruntled mother took to Facebook last week to express her frustration and anger at childless couples and millennials enjoying their child-free time at the amusement park. And she did not hold back.

In her explosive post, which, just to warn you, includes an awful lot of swearing, the unidentified woman rants about how childless couples ruined her and her son's experience at the theme park and even went as far as saying people without children should be banned altogether.

Keep reading to see the woman's spew of word-vomit, though make sure you get your popcorn ready, folks. Her rant is one long and amusing read.

Disney movies are completely timeless, meaning that us adults can still watch and enjoy our favorite childhood cartoons.

And their theme parks provide fun for all the family.

Because we all love a bit of Disney, don't we? No matter how old you are, prancing around an amusement park themed completely around your favorite cartoons will always be bags of fun.

Their theme parks cater to all ages...

Because you're never too old for Disney (no matter what your parents tell you). Disney parks have a variety of different attractions for the little ones, and an array of epic rollercoasters for the adults.

Though, secretly, we all just want to have a cuddle with our favorite Disney characters.

Move aside, kids. I've been waiting to meet Goofy for twenty-five whole years.

But not everyone enjoys the presence of adults at the theme parks...

Darth Vader and his Storm Troopers are allowed to enjoy the festivities, but us childless adults are apparently not.

One woman made her thoughts on adults enjoying Disney World very clear.

The furious mom, who has remained unidentified, caught the attention of Disney lovers after her explosive Facebook rant, in which she condemned every childless adult and millennial at Disney World.

The woman believes childless adults ruin the Disney experience for the other families.

An incident at one of the Disney parks triggered her explicit rant...

In her rant, the seething mother described how, while visiting one of the parks, she had to deny her 3-year-old son, Aiden, a Mickey Mouse shaped pretzel because the queue was too long. I know what you're thinking... what does this have to do with millennials?

Too many millennials and childless adults clogging up the park were to blame... apparently.

The mom initially fumed over the high number of childless young adults at the park, writing, "It p*sses me off TO NO END!!!! When I see CHILDLESS COUPLES WITHOUT AT DISNEY WORLD!!!!"

She went on to describe how Disney's magic is reserved for mothers and their children only.

"DW is a FAMILY amusement park!!! Yet these IMMATURE millennials THROW AWAY THEIR MONEY ON USELESS CRAP!!!! They have NO idea the JOY and HAPPINESS it is to MOTHERS WHO BUYS THEIR BABIES TREATS AND TOYS!!!!" Again, feeling personally attacked. Disney merchandise is not useless crap, okay? Note: She actually used this amount of capital letters. I have not written it out like this just for dramatic effect, I promise.

One millennial, in particular, triggered the foul-mouthed rant...

And she also has a few rule adjustment suggestions for Disney themselves... "DW is for CHILDREN!! People without CHILDREN need to be BANNED!!!! Mothers with children should be allowed to skip ALL THE LINES!!!!"

But it wasn't over there...

Nope, she continued her blazing rant, writing, "YOU HAVE NO F***ING IDEA WHAT IT’S LIKE TO HAVE TO STAND IN LINE FOR 3 HOURS WITH A CRANKY TIRED EXHAUSTED TODDLER!!!! AND I CAN'T TELL HIM WE CAN'T DO SOMETHING BECAUSE IT'S HIS VACATION TOO!!!!" Suggestion: If your toddler is tired and cranky, maybe take them home instead of blaming childless adults enjoying their own vacations.

And, finally, she concluded her rant...

With the simple, damning sentence, "I f***ing hate childless women with a BURNING PASSION!!!" Again, feeling quite attacked over here...

Twitter user, JenKatWrites, shared a screenshot of the post, hilariously captioning it, "This is my new favorite wild mommy post. It’s me, the millennial slut who just goes to Disney World to make children cry." She took the care to blackout the woman's name.

And the responses have been nothing short of fantastic.

This guy has hit the nail on the head with what your twenties should be all about... hard graft in the coal mines.

Though let's be real... who can be bothered dragging their toddler around Disney World?

Any Mom will relate - a toddler mixed with sugary snacks, loud noises, and hot weather is a recipe for disaster.

Though it is argued that the woman could simply be suffering from a bout of jealousy...

Because come on, every mom has been there. Your kid is kicking off to the high heavens, and you resent every childless person in the room for having such a stress-free life. I ain't judging you.

And some people think children are the problem, not millennials.

@JenKatWrites As a single man who loves to go to Disneyland, as far as I'm concerned the place is wasted on childre… https://t.co/QRucMDNOei
— Troll Paxton (@Troll Paxton)1563701656.0

Because Disney is more complex than just your average theme park, apparently.

Can't we just agree that Disney World is for everyone?

Disney isn't just for children, you know. Though the presence of adults can be problematic sometimes... Disney World has been in the headlines for all the wrong reasons this month after a full family brawl broke out in the middle of one of its parks. Keep scrolling to see the horrific footage... Maybe adults should be banned after all?