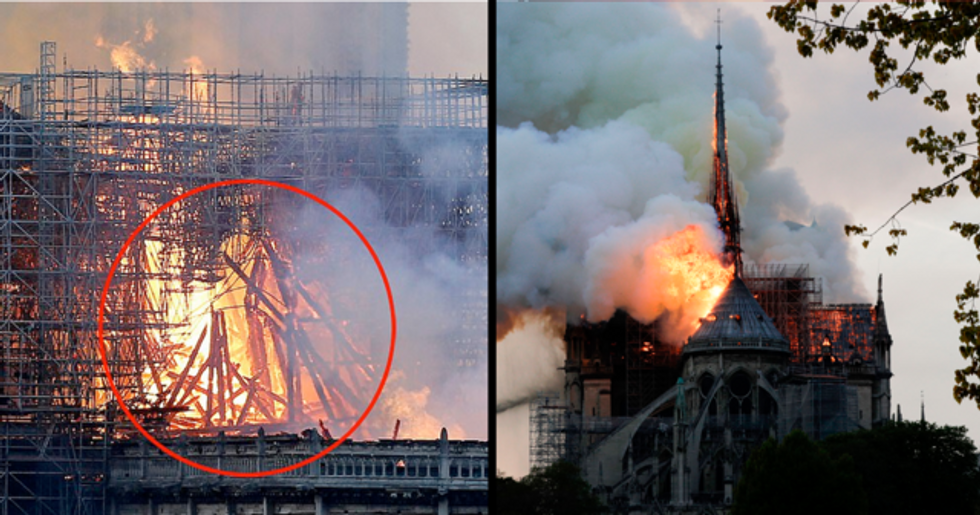 At the beginning of the week, the world was left in horror after one of the oldest and most iconic monuments in the world, was engulfed by flames.

The Notre Dame cathedral which has stood in Paris for over 850 years is well-known for its beautiful Gothic structure, caught fire on Monday evening.

While the direct cause of the fire is still unknown, the emotional response to the disaster has been remarkable.

It has even led to French billionaires donating millions towards the restoration of the much-loved landmark.

However, many have seen a religious significance to the disaster.

As the first images of the damaged interior were released, people were amazed at how intact the altar and cross had remained during the blaze.

Some internet users have also pointed out another potentially spiritual aspect to certain images of the fire but others remain highly skeptical.

We've got all the pictures right here!

Notre Dame cathedral is one of Paris's most iconic landmarks.

Construction started in 1163 and wasn't completed until 1345. I guess you can't rush perfection.

It's one of the finest examples of Gothic architecture.

It's distinguishable thanks to it's flying buttresses and rib vaults, plus a myriad of creepily fascinating gargoyles.

And, it's one of the biggest tourist attractions in Paris. It's even popular with people who aren't religious.

According to some reports, it attracts over twelve million visitors per year.

The building is certainly a cultural touchstone.

It was the inspiration in Victor Hugo's 1831 classic novel, The Hunchback of Notre Dame.  This book has been adapted to screen many times, perhaps most famously by Disney.

The cathedral was always under scaffolding for some planned renovation work. The exact cause of the fire is not yet known.

It was quite a horrific sight.

Seeing the beautiful Parisian skyline enveloped in smoke as one of the oldest and most iconic buildings burned struck an emotional chord.

The fire took down the cathedral's spire.

As it fell, it caused considerable damage to the upper walls and roof beneath. Many of the windows were always taken out.

Although firefighters responded promptly to the disaster, it took over fifteen hours to ensure the fire was extinguished.

But many gathered on the banks of the Seine to watch the full disaster unfold.

Much of the fire was fought from the inside.

To prevent forcing the intense heat inside the cathedral, where it could cause damage to priceless historical artefacts.

The cultural impact has been enormous.

For many, seeing such an old and famous building destroyed in such a brutal way was an intense experience.

Members of the public were visibly emotional.

Many gathered to watch the fire burn, saying prayers and singing hymns on the banks of the Seine.

It's clear the public have been deeply touched.

There's just something tragic about such needless destruction - especially of a place which meant so much to many around the world.

As the fire was extinguished, images of the inside damage surfaced.

And while it can't be denied a lot of work needs done to restore the church, some were surprised to see the crucifix seemed largely untouched by the fire.

In fact, some have taken it as a sign.

The fact that in the midst of destruction, a crucifix managed to stand strong, has been taken by some as proof of miraculous divine intervention.

Something else has also been pointed out.

In certain images of the fire, flames appear to be coming out of the cathedral, towards the camera.

But one woman saw something different.

This is Lesley Rowan, a mom from Scotland, UK. Like many, she saw images of the Notre Dame fire this week.

She saw something quite peculiar in the flames.

Rather than just a mass of burning wood and rubble, Rowan claimed she could make out a mysterious figure in the images.

Rowan posted on Facebook about her discovery, looking to see if any of her friends agreed with her.

The mystery figure is outlined here - and we guess we can sort of see what Rowan is talking about?

Rowan took it one step further.

She claimed that not only was this a 'mystery figure' but it was a representation of Jesus Christ himself. And it seemed some even agreed with her!

The story was shared on social media.

Many were pretty interested in how exactly Rowan had come to her conclusion that Jesus was in the fire.

It's safe to say not many agreed.

Most were pretty skeptical of Rowan's "vision," thinking that it may be a bit of a reach to connect a photographic quirk to a god-like presence.

Others were a little frustrated.

After all, if Jesus was there in the fire, that's hardly something comforting. In fact, it's a little frightening!

There are other problems too.

There seems to be a media trope of people seeing iconography in unlikely places and it's never usually taken seriously.

Some people were quick to mock the story.

Many suspected the woman was simply looking to insert herself into the Notre Dame story and achieve a little bit of viral fame.

The idea of finding meaning in the tragedy was mocked more generally.

Some took serious issue with the religious significance being ascribed to various aspects of the disaster.

But there has been one Jesus-related miracle.

One of the oldest relics in Notre Dame, presumed to be a part of Jesus's crown of thorns, has been confirmed to be undamaged in the fire.

People have really come together to restore the cathedral.

But it's not a motion without controversy. Many are concerned that money donated could be put to far better, human use elsewhere.

Are you convinced by these pictures?

Either way, in times of distress, religious or not, it's worth considering what Jesus would do. Whether he'd appear in an enormous blaze? Well, that's in the eye of the beholder.