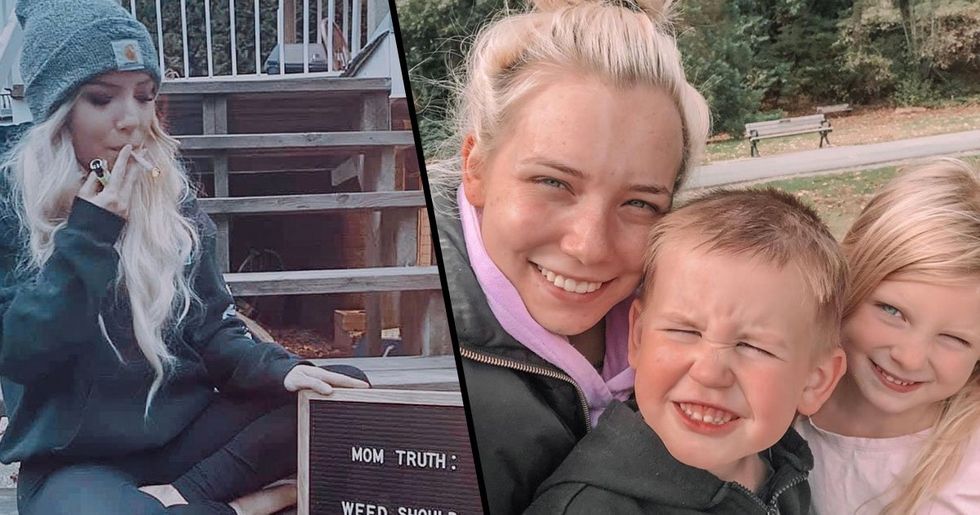 When it comes to parenting, there will always be someone out there who will disagree with certain parenting methods and techniques.

The internet is full of parent-shamers, and a lot of parents try their best to fit in with the "norms" of the good parenting society that we currently live in.

But one mom has spoken out about her lifestyle, and how it has made her a much better parent.

Caitlin Fladager has spoken about smoking weed regularly and how it has made her parenting a lot better, rather than negatively affecting her and her children.

Being a parent is no walk in the park.

So it is important for parents to relax, from time to time, for their own physical and emotional wellbeing.

Moms and dads indulge in many different things in order to cope with the stresses of parenthood...

Whether that's a hot bubble bath, or a glass of wine once the kids are in bed, parents need their "me time" to unwind and relax after a non-stop day of looking after their children.

But a lot of parents are judged for what they do in their spare time...

Especially for parents who prefer to drink alcohol or smoke cigarettes when their children have gone to bed, they often find that there is a big stigma against these recreational activities.

So what about casual drug use?

Of course, taking illegal drugs is a big no go for anybody, never mind parents.

But sadly, there are parents out there who still use drugs.

Addictions are difficult to overcome, and it's a shame for some parents that having children isn't enough to beat their addictions.

And it is actually legal in several states across America.

A lot of people here around the world smoke marijuana regularly.

It is a very casual and recreational drug, and it actually has been reported to have some beneficial properties in terms of health and medicine.

One mom from Vancouver fully agrees with the beneficial properties of weed...

And she has spoken out about how she smokes weed every day, despite having 2 children.

This is Caitlin Fladager.

The twenty-three-year-old mom of 2 has opened up about how smoking weed daily has helped her become a better mother.

She works as a writer and a mental health advocate...

She strongly believes that weed allows her to "wake up well-rested" and that it gives her a much "clearer mind."

Caitlin has struggled with her mental health for the majority of her life.

She claims to have noticed a drastic improvement in her mental health and wellbeing as a result of smoking weed.

She wants to tackle the stigma around moms who smoke weed.

Reaching out to her 289,000 Instagram followers, she wrote a candid caption along with a photograph of her smoking a joint.

"Yes, I have 2 kids. Yes, I smoke weed daily. ⁣It’s so funny to me how frowned upon marijuana is. No one looks twice when a mom says she enjoys ‘mom juice’ AKA wine, after her kids are in bed. But when a mom says she smokes weed, it’s a huge shock," she wrote.

Despite the usual side-effects of marijuana, Caitlin claims she feels "well-rested" from the drug.

"I talk about this to bring awareness. I feel as not enough people talk about this. Marijuana has helped me so much, especially when it comes to being a mom," she said. "I have never been the most patient with my 2 kids. Weed makes me a better mom, as I get a good night's sleep after I smoke. I wake up well-rested, and with a more clear mind."

Caitlin no longer needs to take her anti-depressants...

Marijuana is Caitlin's "glass of wine"...

⁣⁣"It's okay to smoke instead of drink. I used to have a problem with drinking, and my behavior that came along with that. Weed has helped me to stop drinking so much, and to be honest, I much prefer smoking over drinking," she explained. "Marijuana is my glass of wine. It's my can of beer. It's my relaxation time. You can still be a kick-ass mom, and smoke weed."⁣⁣

Caitlin received floods of support from her followers, with many moms agreeing with her opinion on smoking weed.

Caitlin spoke to Unilad about the positive reaction she faced following the Instagram post, "The reaction has been amazing, from what I’ve seen. I’ve had so many parents, not just moms, but dads too, reach out to me thanking me."

Caitlin wants parents to realize it's okay to smoke weed from time to time...

"Thanking me for making them feel less alone, less guilty... there's a lot of guilt surrounding it and I think that's awful. That's something I'm trying to change. It's okay to smoke weed and be a parent."

She believes that alcohol is worse than marijuana...

"I hope to absolutely tackle the stigma. It should be just as acceptable, if not more, as a glass of wine after the kids go to bed."

Caitlin wants to be someone who struggling moms can relate to.

She is very open on Instagram about her severe struggles with depression and anxiety, as well as being a young mom of 2 children. If smoking marijuana is helping her mental health and is allowing her to be the best mom that she can be, then so be it!