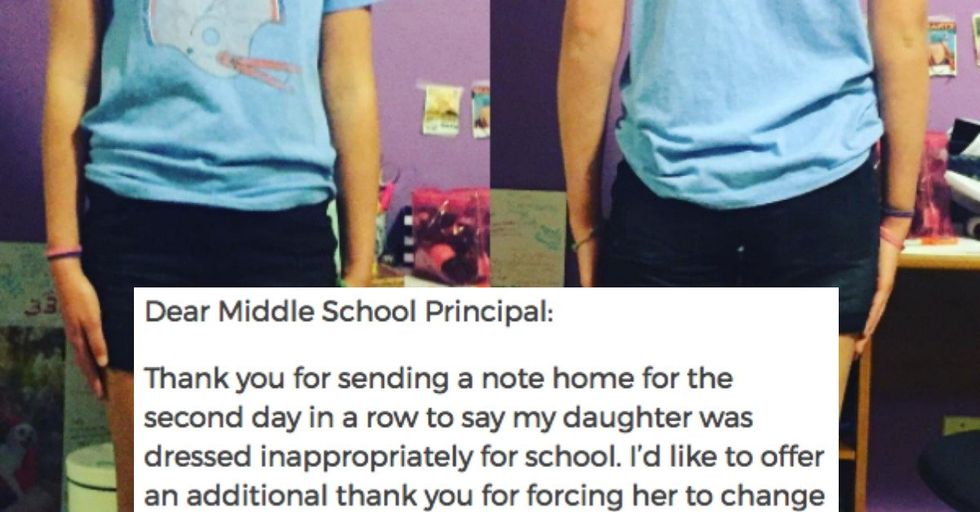 The weather is warmer, so you know what that means! That's right — ridiculous dress code enforcement that a majority of the time is unfair toward the girls in school.

That's what we have today, and hell hath no fury like a mother on a mission.

Can you see what's wrong with this photo?

To most people, this is a picture of an outfit a typical teenage girl might wear to school. Just a simple T-shirt and shorts.

Did you have this reaction?

We're guessing your face looks nothing like this, because you're a normal person with a normal concept of modesty. But to one high school principal, that outfit was the height of scandal.

The person wearing the outfit is Catherine Guggenheimer Pearlman's daughter.

She's only 13 years old, but her principal told her that her shorts were inappropriate because they stopped short of her fingertips. Catherine took to social media to share a photo of the shorts that got her daughter in trouble.

You've got to admit this dress code violation is worthy of an eye roll.

There's obviously nothing wrong with those shorts, and anyone who sees a problem is just looking for something to fight about. Unfortunately for the principal, Catherine was ready to go to the mat.

We can all agree that having to choose an outfit every day is hard enough, right?

Having to take the extra time to make sure an outfit follows your school's draconian dress code is just bonkers. Rather than punishing her daughter for wearing an "inappropriate" outfit to school, Catherine wrote a letter to the principal to call him out. And she did not hold back.

In the letter, she talks about how her daughter is being punished for being tall for her age, and then hilariously calls on the principal for help.

Can you sense the sarcasm dripping off the letter yet?

It doesn't take much, now does it? It's pretty clear that this isn't a welcome response.

As far as "burns" go, this one has the added weight of being polite AND correct, which means it goes a lot further than your typical one would.

This mom has parenting down to a science.

Then this helpful reminder:

Welp, I guess this means we're all headed to the mall.

Hopefully, the school admin can find something that mesh well with the draconian dress code and the girl's tastes. Good luck, because the mom has completely given up!

She signed the letter, 'Sick Of The Dress Code Mom.'

Let's have a round of applause for this awesome mom!

It's so great that she defended her daughter and called out the principal for his outdated views. But the letter didn't end there. The postscript is what really takes this whole debacle to the next level.

Yup! This same daughter had been told that she couldn't wear yoga pants earlier that same school year! When will people learn?!

Dress codes are becoming a big bone of contention lately with teachers, students, AND administrators.

It turns out that kids aren't willing to subject themselves to the arbitrary measures they once were. Especially when they don't see the point.

They also don't see the point of the sexist implementation.

Because no one can agree on anything, some holdouts insist that even colleges should have dress codes for kids.

Should we just give up now? I'm thinking yes. Fashion anarchy for the world!

In fact, we’re seeing a ton of outrageous dress code overreactions from schools.

Check out this next story—an honor roll student came in danger of loosing her scholarships and was suspended, all over a shirt that showed the tops of her shoulders.

Does this seem fair?

Because to us, it seems downright infuriating (on behalf of Summer, of course)!

One school dress-coded at least 25 girls at once.

Vista Murrieta High School pulled between 25 and 60 girls from class (the school claims it was 25, but the students claim it was more—up to perhaps 60) over the dress code on a day with 90-degree heat.

And students were quick to point out the irony.

If a girl were wearing these shorts, she’d be punished for it! (Click on the photo to see the whole thing.)

But it figures, since the school has claimed the right to pick and choose its standards.

Students received this message on their guidelines for how to dress. Comforting, right?

Can you say ‘double standard’?

Wow. My daughter got #dresscoded for this dress. They said it was too short. Yet, boys can dress like this?? She had 3 exams that afternoon, including Physics AP, Latin 3, and APUSH. But her skirt length.... -roseyabu

And a Texas high school came under fire for this dress code video:

It’s essentially a video where girls are shamed for wearing athletic shorts…in the state of Texas, where hot temperatures are quite common.

The student who posted it got some backlash too:

@idoartnow Hello! I have received some backlash both at school and online. Regardless those who disagree (whose opi… https://t.co/cKDRRVXuGN
— cat (@cat)1534640449.0

And she had a well-put response!

Did you know about the hashtag?

“In 2014, a group of New Jersey high schoolers created #iammorethanadistraction to push back against their dress co… https://t.co/FJlow0sE37
— Mona Eltahawy (@Mona Eltahawy)1526148107.0

It’s both an inspiring thing, on the part of the students who got this ball rolling, and mind-boggling that this still needs to be said at all!

And here’s why all this dress code hullabaloo is a major problem:

Why do girls have to miss class for this? They haven’t done anything wrong!