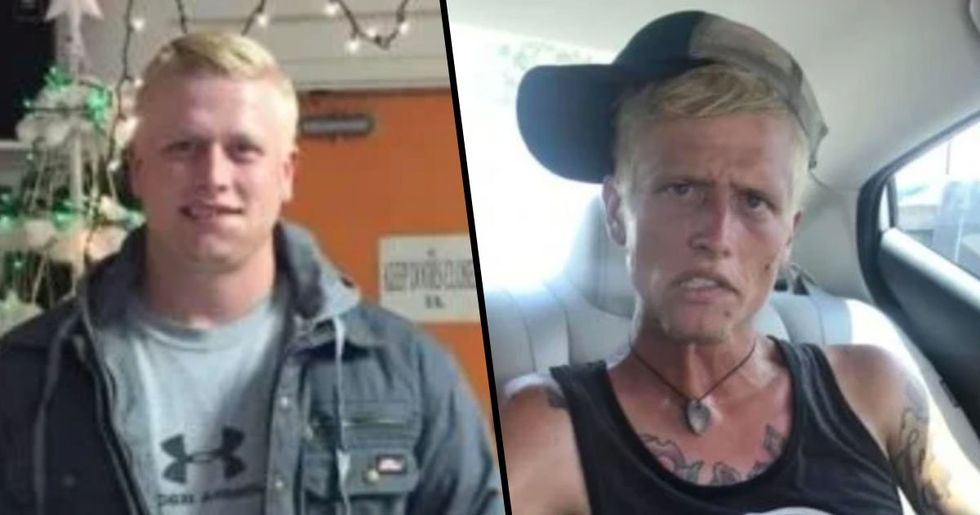 The effects of drug addiction are truly life-destroying and there are millions of people out there who battle and suffer from these types of addictions.

It really isn't as simple as it seems for people to simply quit their addictions and turn their lives around, and it is a sad reality that the majority of these individuals face lose their lives to their habits.

A mom from Missouri recently took to social media to share some harrowing photos of her son who is addicted to drugs and whose life has taken a very rapid downward spiral in the last 7 months, so keep scrolling to find out more about this devastating story...

Drug addiction is no joke.

Drugs are chemicals that affect the body and brain. The effects that they leave on the body and mind can be long-lasting and completely life-destroying.

There are more drug addicts out there than one would expect...

According to the Gateway Foundation, more than 7 million people in the US suffer from an illicit drug disorder, and one in 4 deaths results from illicit drug use.

Drug-related illnesses are one of the most common health issues...

In fact, more deaths, illnesses, and disabilities are associated with drug abuse than any other preventable health condition.

Drug use also has a massive effect on behavior.

It is no secret that drug addicts have a noticeable change in personality and behavior. Substance use disorders have effects such as paranoia, aggressiveness, violence, impulsiveness, and a lack of self-control.

These behaviors can lead to severe consequences...

People who suffer from drug addictions can begin to slack in both their personal and professional lives, losing friendships, relationships, family members, and even jobs along the way.

This will often result in homelessness...

There are approximately 600,000 homeless people here in the United States, and The National Coalition for the Homeless found that twenty-six-percent are dependent on harmful substances.

A lot of homeless people turn to drink and drugs to blot out the reality of living on the streets.

Mark Johnson, a British author who used to be homeless and a drug addict, wrote in his column for The Guardian that giving homeless people food over money is no help at all. "One woman, who feared that by giving money to a homeless man she was banging another nail in his coffin, recently told me that she had instead given him an apple. I replied that he didn't need an apple; he almost certainly needed drink or drugs to blot out the reality of living on the streets – which is unhealthy, dangerous and frightening – as well as to help him forget the reasons he's there. No one is homeless by choice."

This has a devastating impact on families...

Many families are unfortunate enough to watch their loved ones decline at the hands of drug abuse and addiction, and despite many efforts, it is sadly found by family and friends that there isn't much that they can do for severe addicts.

A mom has recently spoken out about the struggles with her son...

Jennifer Salfen-Tracy is from Missouri and is a mom of 3. All of her children have grown up and are young adults now, but she has recently expressed concern for her twenty-six-year-old son, Cody.

He has cut all ties with his family...

Cody, pictured on the left, moved away from home and is currently sleeping rough on the streets in Las Vegas, and is presumed to be with a girlfriend.

The photographs were taken 7 months apart, and the changes in Cody's appearance are truly devastating.

He has visibly lost weight, his eyes appear to be sunken into his face, and his skin is covered in scars and track marks from the consistent drug abuse over the last 7 months.

Cody's addiction has had a clear impact on the entire family.

Jennifer wrote in an emotional Facebook post: "The face of [drugs]... is reality for so many people and families in this world today." "This may be long so I apologize. For my family and friends who know me know that my oldest son Cody Bishop is suffering from his addiction. I am hesitant on sharing but many people ask how things are going so I feel I should share."

Jennifer has decided it is time to open up about her son's problems.

"I have learned along this path that so many people and families deal with the same heartache but just do not talk about it," she continued to write. "This is a true issue in our world today that we need to pull together and focus on to fix instead of the government worrying about and spending all their money on throwing each other under the bus."

She is clearly desperate for Cody to reach out...

"Update..... Cody is still homeless in Las Vegas and I have not heard from him in weeks now. Hearing how bad he is doing is hard but not hearing at all is worse. The unknown is what makes a person not sleep at night. It is hard to understand how someone who has families and children who love and need them live the life they do." "I have turned it over to God and pray that he decides he is tired of living like this and wants to come home to get help."

Jennifer acknowledged the floods of support that came from social media...

"Through social media, I have come along so many great people that have crossed his path over time through his past rehab. They have a great support team with each other that is amazing and I appreciate those who have reached out trying to help. I just want to say thank you to those who have talked to him and thank you for all the prayers. This is not just a problem that my family faces but almost everyone knows someone who has a drunk addiction."

Cody is yet to make contact with his worried family...

"I pray for strength for those suffering and healing for their families and friends," she said. "FYI... these pictures were taken 7 months apart. That is how fast someone is effected... let’s get ahold of this issue America and help each other. Thanks again for everyone’s love and support. And Cody is you see this please call us... we love you!"

Jennifer isn't the only one to share harrowing stories about drug addiction online in an attempt to raise awareness...

Melissa Lee Matos, who is from New Jersey, took to social media to share her transformation since coming clean off drugs.

Her transformation is shocking.

"3 years and 7 months ago, I was waking up from a 3-day blackout caused by excessive use of [drugs]," she wrote. "I was a complete failure as a parent, and CPS was on my a**. I was lost, terrified, hopeless and wanted to die. However, my Higher Power had other plans for me. My parents thought I was sober and recovering. I had to call my mother and admit to her that I was still active, and worse than I had ever been. I told her if I didn't get out of my situation, I was going to die. That choice, that honesty, that cry for help... it saved my life."

The effects of drug abuse and addiction are truly heartbreaking.

And it goes to show that with the help of family, friends, and support groups, people can eventually battle their way through their addictions and they can ultimately be given a second chance in life.